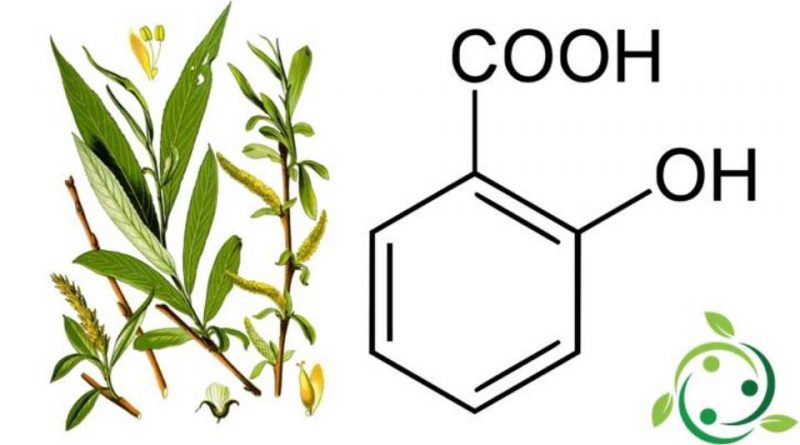 Salicylic acid whose term in the IUPAC official nomenclature is: 2-hydroxybenzoic acid is also known by the alternative names of: ortho-hydroxybenzoic acid or o-hydroxybenzoic acid.
Salicylic acid has a brute or molecular formula: C7H6O3 and is a colorless crystalline carboxylic acid, synthesized by the Kolbe method.
It should be remembered that, on a chemical level, by replacing the phenolic hydroxyl with an acetyl, acetylsalicylic acid is obtained, the known active principle of aspirin.
In nature, salicylic acid, also in the form of salt (salicylates) is contained in various plants such as Salix alba L. and Filipendula ulmaria (L.) Maxim.
Other plants that contain salicylates are Gaultheria procumbens L., a shrub native to Nor America; Viola tricolor L., Fragaria vesca L. and Betula pendula Roth, 1788.
All the properties of willow, known since ancient times, are attributable to its main active ingredient, namely salicylic acid.
A glucoside, salicin is extracted from the willow bark. Once taken, it is metabolized by the intestinal flora in saligenin and by the liver in salicylic acid. Due to these transformations, the time to reach the therapeutic index and the duration of the same are longer than synthetic salicylates.
Although the therapeutic dose is rarely reached with herbal extracts of willow and with the recommended doses, willow is useful for anti-rheumatic and anti-inflammatory action.
The use is recommended in the case of osteo-articular inflammations, myalgias and neuralgia.
The healing properties of salicylic acid have been known since ancient times, so much so that the substance was essentially extracted from the willow plant, from which the name derives. Starting from the nineteenth century extracts of salicin, a glycoside formed from glucose and salicylic acid, have been used in medicine as an anti-inflammatory in the treatment of rheumatoid arthritis. Subsequently, numerous derivatives were synthesized, which constitute the class of salicylates, of which the best known is acetylsalicylic acid (Aspirin).
In addition, salicylic acid is used in dermatology for the treatment of psoriasis. In fact, this compound has keratolytic properties: it is placed on the surface to be cleaned in 6% alcohol solution. After a few minutes there will be evaporation of the alcoholic part and precipitation of salicylic acid which performs its action against the keratinocyte.
Willow extracts are present in various herbal preparations also for the febrifugal and antifebrile action.

For external use, willow extracts are used, for example, in the treatment of acne as it is anti-inflammatory and healing.
Willow extracts are contraindicated in case of allergy to salicylates and people allergic to aspirin should avoid using them.
In addition, the extracts can cause gastric problems, such as nausea, irritation, vomiting and gastrointestinal bleeding. This toxicity is to be considered minor in case of intake of willow salicylates compared to aspirin, due to the lower concentration of salicylates in herbal preparations. Finally, to avoid the simultaneous intake of willow extracts with drugs, synthetic or vegetable, antiplatelet and anticoagulant for possible interactions.
Salicylic acid, as mentioned, is toxic if ingested in large quantities, but if used in suitable quantities it is useful for food preservation and acts as an antiseptic in toothpaste. The carboxylic group -COOH, easily reacts with alcohols to produce esters. The ester with methanol is methyl salicylate (or methyl salicylate), an essential component of Gaultheria procumbens and white willow (Salix alba).
Foods naturally rich in salicylic acid are apricots (3 mg / 100g), red and black currants (5 mg / 100g), chicory (1 mg / 100g), oranges (2.4 mg / 100g), the pineapple (2 mg / 100g) and raspberries (5 mg / 100g).
Salicylic acid is produced in plant cells from phenylalanine which is transformed into trans cinnamic acid, from which, through reductive or non-reductive oxidation, it is transformed into benzoic acid in a glycosylated form.
The glycosylated form is inactive in the vegetable and thanks to the enzyme benzoic hydroxylase it is transformed into salicidic acid which can become salicidic acid-glucose, or an inactive form in which it is usually found inside the plant.
Salicylic acid is not stopped inside the vegetable but moves along the vessels.
Salicylic acid is also used as a plant hormone as it stimulates cyanide-resistant respiration (alternative oxidase) especially in plants of the Araceae family.
Its activation involves the production of heat which releases volatile substances such as indoles and / or polyamines for entomophilic pollination; it is also responsible for resistance to phytopathogens by inducing the production of enzymes of the pathogenase family (PRP) which determine the acquired systemic resistance (SAR – Systemic Acquired Resistance).