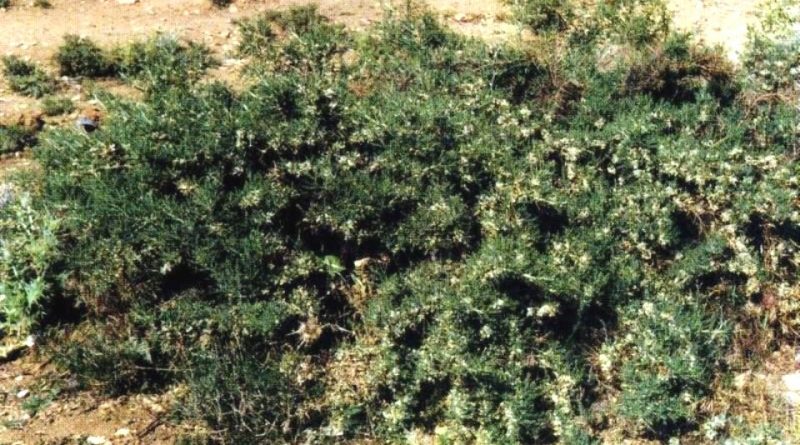 Etymology –
The term Astragalus refers to a legume mentioned by Pliny (perhaps from the Greek ἀστράγαλοϛ astrágalos astragalus, wing, heel, vertebra, a bone used by the Greeks and Romans to also obtain game dice to which the angular shape of the seeds is recalled (according to A Gentil and Dave’s Garden) or gnarled roots (according to D. Gledhill and Flowers in Israel). According to A.Neill, the name derives instead from ἀστήρ astér astro, star and from γάλα gála milk, for the shape and color of the flower and because it was believed to increase the milk production of the goats that feed on it, as well as the common English name Milk vetch would seem to confirm).
The specific epithet brachycalyx comes from the Greek βραχύς brachýs short, short and from κᾱλυξ calyx calyx: from the short calyx.

Geographical Distribution and Habitat –
Astragalus brachycalyx is a legume that grows on the mountainous and rocky slopes of western Asia, from western Iran and northern Iraq to Turkey.
Its habitat is that of rocky places between 1,800 and 3,100 meters in Turkey, while it grows at altitudes between 1,700 and 2,500 meters in Iraq. 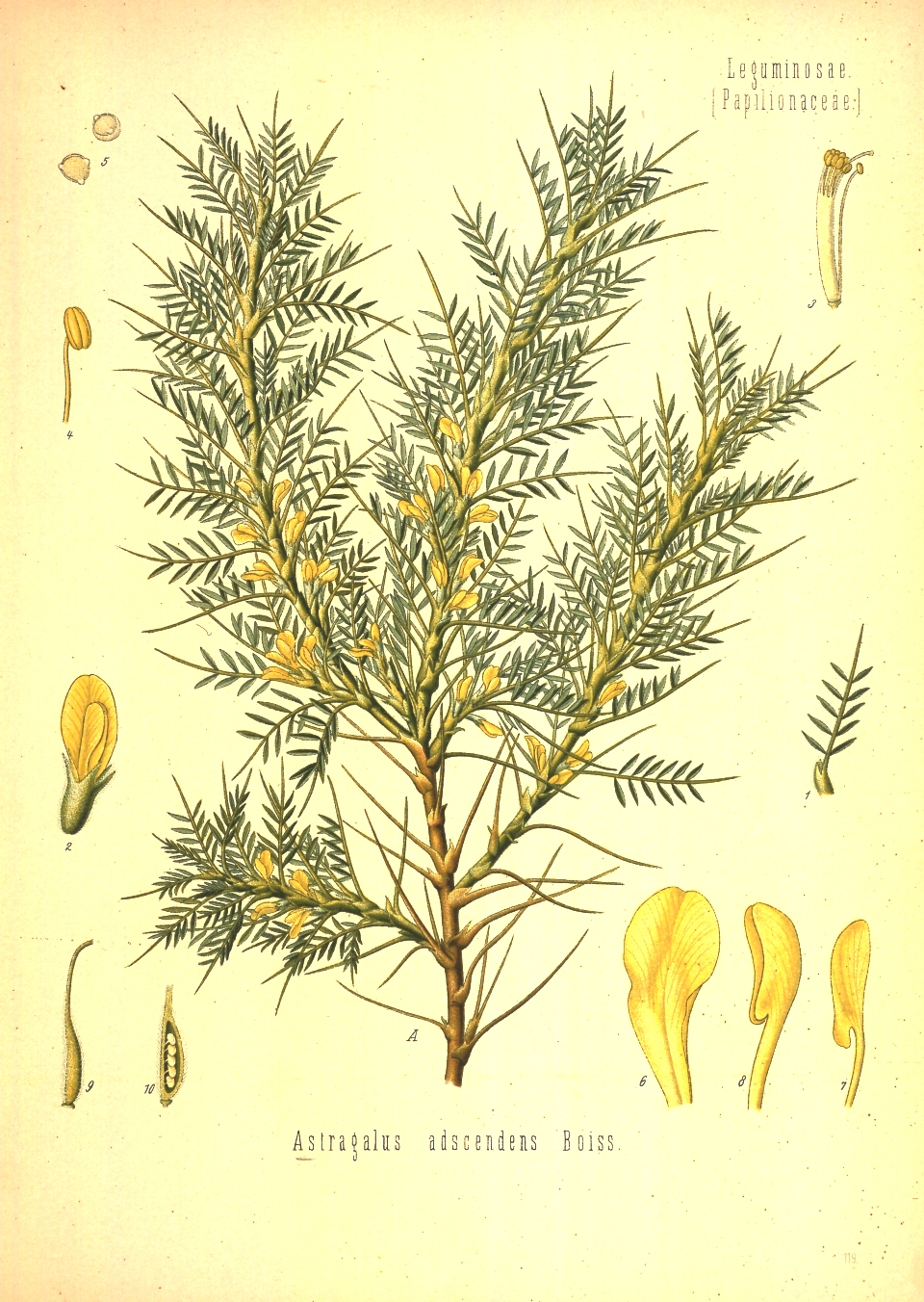 Description –
Persian manna is a deciduous, thorny, dwarf shrub, freely branched from the base, with a height of between 20 and 100 cm. It is hermaphrodite, therefore with both male and female organs.
The leaves are dark green in color, small lanceolate.
The flowers are small yellow in color, typical of legumes and are pollinated by bees and lepidoptera (moths and butterflies).
This plant produces a rubber that has many uses in medicine, as a food additive and in industry. The production is however low, so it is not convenient on an industrial scale but commercially it is used locally.

Cultivation –
Astragalus brachycalyx is a plant suitable for growing in light (sandy) or medium-clay soils, prefers well-drained, basically dry soils, and can grow in poor soils. The suitable pH is that of neutral or slightly alkaline soils and finds it difficult to grow in the shade.
The species generally prefers a gravelly soil with a small amount of fine soil.
Most of these plants grow in subarid areas with an annual precipitation of no more than 500 mm, with a dry period of about four months in summer and most of the rainfall in winter. Many of these species can be grown outside of these habitats.
In humid climates, although they are likely to tolerate low temperatures, they are unlikely to be successful.
Propagation takes place by seed and this preferably requires a cold stratification period to help germinate the stored seeds. Preserved seeds, and perhaps even fresh seeds, must be immersed for 24 hours in hot water before sowing, making sure not to cook them. Any seed that does not swell must be carefully stitched with a needle, taking care not to damage the embryo and immersed for another 24 hours. Germination can be slow and irregular, but usually within 4-9 weeks or more at 13 ° C if the seed is treated or sown fresh. As soon as it is large enough to manage, the seedlings should be placed in individual pots and grown in the greenhouse for their first winter, planting them in permanent positions in late spring or early summer, after the last expected frosts.
The plant produces an adragant gum which is sometimes expelled when it is injured, but a better quality gum is obtained by cutting it.
The color of the rubber varies, both inside and between species, from white to yellowish brown. The best quality rubber is ribbon and translucent. The color of the rubber of these plants, its quantity and its shape depend on the species, techniques and harvesting conditions.
Plants are generally exploited after their second year of growth and have a profitable rubber production life of approximately 7 years.
This species has a symbiotic relationship with some soil bacteria, these bacteria form nodules on the roots and fix atmospheric nitrogen. Part of this nitrogen is used by the growing plant, but some can also be used by other plants that grow nearby.

Uses and Traditions –
Many members of this genus of plants contain toxic glycosides, in addition they can also accumulate toxic levels of selenium if grown in relatively rich soils.
Gum, obtained mainly from the root, is used in the food industry mainly as a thickening agent, in ice cream, candies, syrups, jellies, salad dressings and mayonnaise.
Rubber is also used in the pharmaceutical industry in the manufacture of pills, tablets and some medicines. Its main medicinal role is as a mucilage to suspend heavy water-insoluble powders for preparations of bismuth or zinc.
The gingival gum gum contains 20-30% of a water-soluble fraction called tragacantina (composed of tragacantic acid and arabinogalactan). It also contains 60 to 70% of a water insoluble fraction called bassorina.
Tragacantic acid is composed of D-galacturonic acid, D-xylose, L-fructose, D-galactose and other sugars.
Tragacantina is composed of uronic acid and arabinose; it dissolves in water to form a viscous colloidal solution.
The tragacanth gum, obtained mainly from the root and the stem, has a wide range of applications. The greatest demand comes from the textile industry where rubber is used as a thickener in the preparation of boiled dyes for the printing of goblets, in the application of textile dyes, for the sizing of yarns and threads and in the dressing of silk and lace fabrics . It is also used in the printing sector; in the production of matches; the preparation of plastic materials; glue and the like; to provide gloss in water and ink colors; in perfumery; manufacture of pencils and in the paper industry as a binding agent.
Cosmetically, it is used in bath creams, jellies, lotions, dental creams, etc. It is also used in the production of superior types of soap. It can be used as an agar substitute in the preparation of nutrients.
From a phytotherapeutic point of view, it does not present any toxicity and instead has antiseptic, emollient, anorexant and laxative properties (in addition to a recognized ability to retard the growth of cancer cells).
This species is included in the IUCN red list of endangered plants.

Preparation method –
The tragacanth gum is viscous, odorless, tasteless and soluble in water. For these characteristics it is used above all in the pharmaceutical field to prepare emulsions, but also in the food industry as an additive (thickener for sauces, syrups, gummy candies, ice cream, confectionery decorations) and in the textile one (tannery and textile dyeing). It is classified with the food symbol E413.