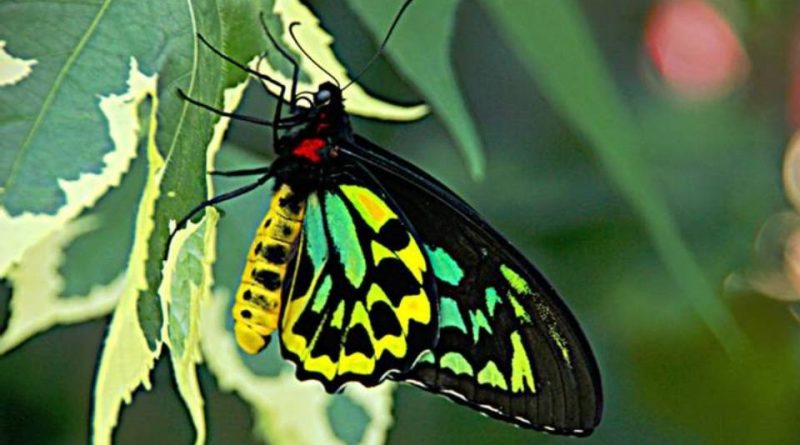 The butterfly of Queen Alexandra (Ornithoptera alexandrae (Rothschild, 1776)) is a moth belonging to the Papilionidae family.

Geographical Distribution and Habitat –
Queen Alexandra’s butterfly is a moth whose habitat is restricted to the Gold Province in eastern Papua New Guinea.

Morphology –
Ornithoptera alexandrae is the largest butterfly in the world.
The females are larger than the males with markedly wider and rounded wings that can reach a wingspan of 31 cm, a body length of 8 cm and a weight of up to 12 grams, which obviously represent remarkable measures for a butterfly.
The female is recognized for the brown wings with white designs and a cream-colored body with a small section on the chest covered with red fur.
The males are smaller and have brown wings, with iridescent blue and green designs and a bright yellow abdomen, with a wingspan around 16 cm but which can also reach 20 cm.
A spectacular form of the male is the atavus, which has golden dots on its hind wings.
The newly emerged caterpillars are black, with red tubercles and have a cream-colored band or a saddle in the middle of its body.
The pupae are golden yellow or light brown with black marks. Male pupae are distinguished by a faint charcoal-colored spot that becomes a band in the adult butterfly called the sex mark.

Aptitude and biological cycle –
The mating phase is preceded by courtship which is short but spectacular; males hover over a potential partner, sprinkling it with a pheromone that induces mating. Receptive females will allow the male to settle and mate, while non-receptive females will fly away or discourage the male in some way.
However, the butterflies of the female queen Alessandra lay around 27 eggs throughout their life.
Caterpillars babies eat the shell of their egg before feeding on the leaves.
The time to develop from egg to chrysalis is about six weeks, while the pupal stage lasts a month or more. Adults come out of the pupa early in the morning while the humidity is still high, given that the huge wings could dry out before they completely spread out if the humidity vanished.

Ecological role –
The adults of the Ornithoptera alexandrae live for three months or more and have few predators, with the exception of some large spiders of the genus Nephila and some small birds.
Adults are excellent flyers who are particularly active in the early hours of the morning and at dusk when feeding on flowers.
Males also patrol areas of host plants looking for newborn females during the morning.
Females spend most of their time searching for host plants.
The males are highly territorial, chasing away potential rivals and, at times, chasing small birds as well as other troidine species. The flight is usually high in the foliage of the forest but both sexes descend a few meters from the ground to feed or lay blue eggs.
After feeding on the shell from which they were born, the larvae begin to extract nutrients from pipe vines of the genus Pararistolochia (family Aristolochiaceae), including P. dielsiana and P. schlecteri.
At first they feed on fresh foliage of the host plants and then also on more woody parts.
Plants of the Aristolochiaceae family contain aristolochic acids in the leaves and stems. This is believed to be a powerful poison that accumulates in the larvae during their development.
For the IUCN, the butterfly of Queen Alexandra is considered an endangered species, being restricted to approximately 100 square kilometers of rainforest near Popondetta, in the province of Oro in Papua New Guinea. The greatest danger for this species is the destruction of the habitat to make way for oil palm plantations. However, it should be noted that the eruption of nearby Mount Lamington in 1950 destroyed a large area of ​​origin of this species and is one of the most important reasons for its current rarity. Because of this, this butterfly has an extremely high value on the black market.
The species is also highly valued by collectors, with illegal samples also sold for thousands of dollars. Even though collectors are often involved in the decline of this species, the greatest danger remains the destruction of the habitat. The first pickers, frustrated by the height at which adults fly during the day, often use small hunting rifles to catch, but since collectors demand quality samples, many of them are made from larvae and pupae.
Also for this reason it is reported as endangered under CITES Appendix I, which completely prohibits its sale.