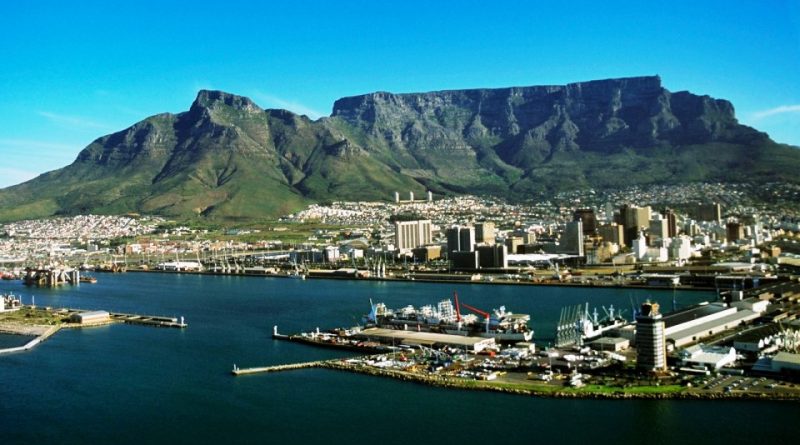 South Africa or the Republic of South Africa is an independent state that is geographically the southernmost of Africa; Cape Agulhas is located in its territory, the southernmost point of the continent, which conventionally separates the Indian ocean from the Atlantic, the seas on which the country faces.
The land borders of South Africa are from west to east, with Namibia (northwest), Botswana and Zimbabwe (north), Mozambique (north-east) and Swaziland (east), while entirely included in its territory is the enclave of the Lesotho.
From a political point of view, several islands also belong to South Africa, including the Prince Edward Islands, about 1770 km south-east of Port Elizabeth, and numerous minors along the coast.
South Africa is represented by various ethnicities and languages. It speaks 12 official languages, of which two of European origin, English, brought there by the British colonists, and Afrikaans, African evolution of the language of the Dutch settlers of the seventeenth century who came there following the discovery of the southern lands by the Portuguese.
In the history of South Africa and its autonomy we must mention the sad parenthesis, for most of the twentieth century, after formal independence from the United Kingdom, the policy of the African state which was marked by a rigid racial segregation called apartheid (in Afrikaans “separation “).
During this sad historical phase, the violations of human rights that such a conduct entailed were noteworthy, including the well-known imprisonment for 27 years of activist Nelson Mandela.
It was the period that brought about a series of international sanctions for the country, up to the sports boycott of South Africa from any sports competition and exclusion from the Olympics. The situation normalized with the gradual overcoming of segregation at the end of the century, which led to the adoption of a new national flag in 1994.
From a geographical point of view, the South African territory is largely made up of plateaus, the so-called Alto Veld, which rises to the west, reaching altitudes between 900 and 1900 m above sea level. Towards the coasts the plateau has a raised rim, called Grande Scarpata, which is divided into several mountain ranges separated by areas leveled by erosion (the main modeling agent of the territory, which was no longer affected by important marine ingress after the Paleozoic era) . The Scarpata includes isolated massifs to the southwest, such as the so-called Table Mountain (1914 m), a sandstone massif that looms over Cape Town; to the east and north it develops in important mountain ranges; the main ones are the Drakensberg mountains (Monti dei Draghi), characterized by basaltic effusions and peaks that reach heights above 3000 m (the highest is the Njesuthi, 3408 m), from which smaller chains (Stormberg, Nieuwveld and Sneeuwberg) depart . Also in the north-eastern area are the Swartberg and Langeberg mountain systems. The coastal alluvial plain called Basso Veld extends beyond the Escarpment, except in the area of ​​the Cape Peninsula, where the rock formations reach the ocean directly in a succession of promontories with cliffs. The center of the country is largely occupied by the semi-desert basins of the Great and Little Karoo, which fade north-west into the Kalahari desert, shared by South Africa and Namibia.
As for hydrography, South Africa is divided into several basins, but the main one is in the Atlantic Ocean. The most important river is the Orange (1860 km) to the west, which originates from Lesotho and whose vast basin (1020000 km²) corresponds to a large part of the highlands; the river also marks a section of the border with Namibia. The course of the river, however, is bumped by rapids and waterfalls that make navigation difficult. Among the tributaries of the Orange, the Vaal (1200 km) and the Molopo (about 1000 km) have a certain importance, marking the border with Botswana for a long stretch but it is almost always dry.
Limpopo (1600 km), which divides the country from Botswana, flows into the Indian Ocean; also impossible to navigate. The other rivers generally originate in the Great Escarpment and have a normal course on the coast; among the many, the Tugela is famous, which originates on the Drakensberg, on the border with Lesotho, and forms the homonymous waterfalls.
South African lakes include Sibhayi Lake in Kwazulu-Natal, Groot Vloer, formed by the Sak River (which is, however, almost dry for most of the year), and Lake Santa Lucia, near Durban.
From a climatic point of view, South Africa is a temperate and subtropical country, with significant regional variations due to differences in altitude, exposure, proximity to the sea or not and the influence of ocean currents. The east and south-east coasts are influenced by the current of Mozambique, hot and southward, which contributes to maintaining high temperatures. The west coast is instead affected by the cold Benguela current, which contributes to lowering temperatures and stabilizing the masses of air in the western part of the country. South Africa’s climate is generally dry; dry periods are a frequent phenomenon and water is a precious commodity for agriculture and industry.
Over 67% of the territory is arid or semi-arid and receives less than 810 mm of rain per year. Precipitation normally decreases towards the west, reaching annual averages of less than 30 mm on the northwest coast. Only 6% of the territory, concentrated along the coast of the province of KwaZulu-Natal, receives over 1,016 mm of rain per year.
With the exception of the Cape area, most of the country is under the influence of eastern winds from the Indian ocean. From October to April, the heat accumulated by the soil often creates low pressure areas which attract humidity-laden winds, favoring rainfall in the eastern and central areas of the country. On the west coast the same currents fail to arrive and rainfall is scarce, not exceeding the annual average of 50 mm. In the southwestern end, around the Cape, the influence of western winds from the Atlantic Ocean is strong. This region receives about 560 mm of rain per year. 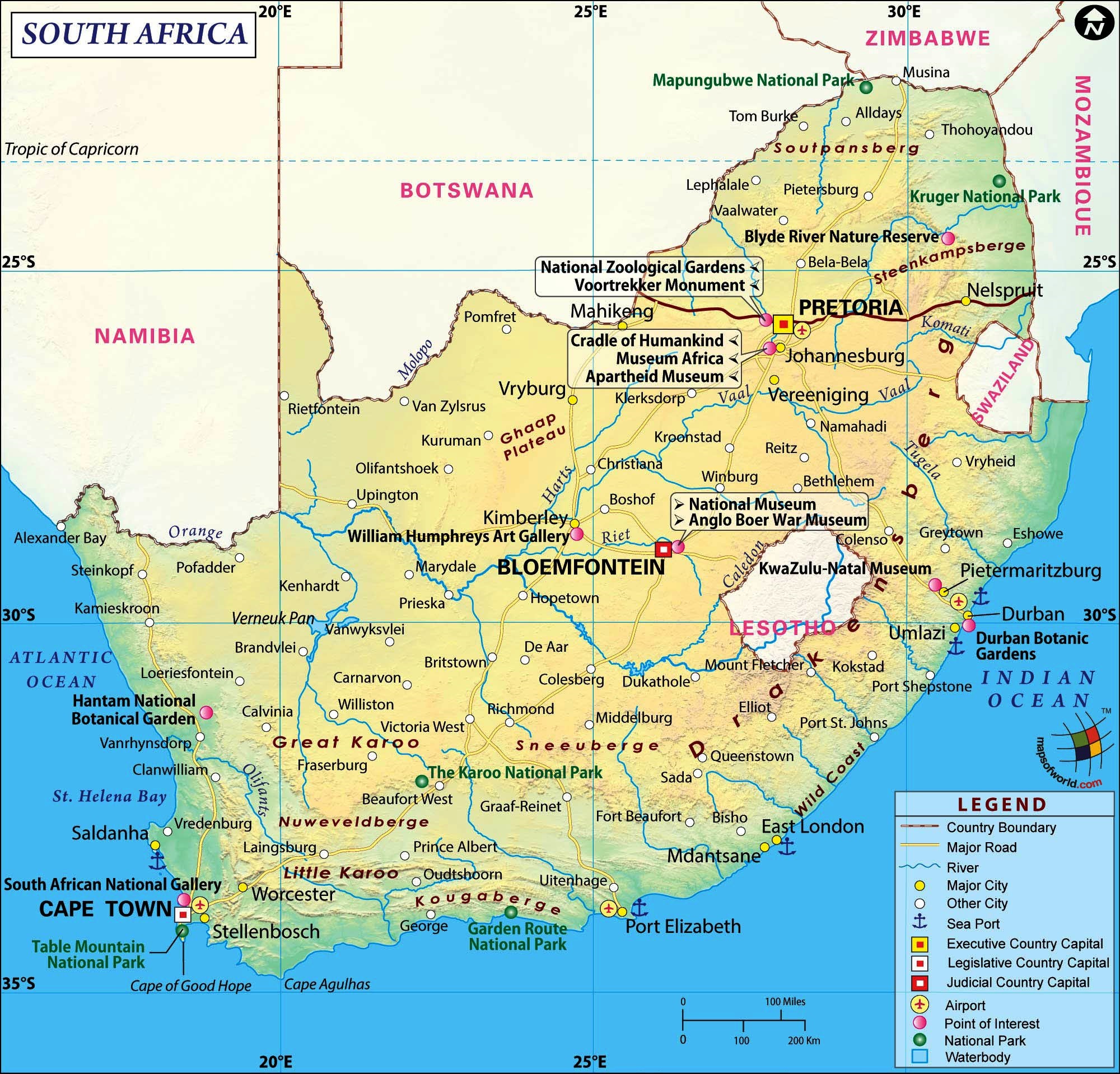 Flora –
The climatic characteristics of the South African region are faithfully reflected in the vegetation cover, which is abundant and luxuriant in the best sprayed regions, poor and sparse in the areas where rainfall is scarce. From a floristic point of view, the country can be divided into six main plant areas: the forest, the savannah, the steppe, the Mediterranean scrub, the desert steppe and the desert.
The forest, which extends only on areas that receive a copious amount of rainfall, covers just 0.25% of the entire territory and is of a temperate, subtropical and mountain type: the temperate forest is widespread mainly in the hilly belt between reliefs of the Langeberge and the southern coast and in more modest areas of central Natal; the subtropical forest extends along the coastal strip of the Natal and the eastern section of the Cape Province; the mountain forest in the same regions as the subtropical one, but in more restricted areas and mainly on the slopes most exposed to damp winds.
The savannah is mainly widespread in the northern and eastern Transvaal, in the northern and south-eastern portion of the Cape Province and in the coastal strip of the Natal; it is often associated with tall trees, such as acacia, spurge and baobab.
The steppe, which extends to cover a large section of the plateau, delimited to the west by the isoieta of 375 mm, and precisely the central and southern Transvaal, the Orange Free State, succeeds the savannah gradually, proceeding inwards. much of Natal and the easternmost section of the Cape Province.
The typical vegetation cover of the south-western tip of the country which enjoys a Mediterranean climate, with hot and dry summers and mild and rainy winters, is the Mediterranean-type scrub, which constitutes a mixed, herbaceous and shrubby association, with characters often accentuated xerophilous.
From the scrub and the steppe it gradually passes into the desert steppe, which is characterized by succulent plants and thorny shrubs and which extends mainly over the Hoë Karroo; further west, in South African Namakwaland and Bosmanland, the vegetation is impoverished and the landscape takes on the appearance of the desert, enlivened here and there by a few thorny shrubs.

Fauna –
Due to the characteristics of its fauna, the territory of the South African Republic is part of the Ethiopian region, of which however it constitutes a particular subregion for certain peculiarities, such as the absence of chimpanzees, gorillas and various types of parrots and the presence of springboks ( South African antelopes) and other animals, including a large variety of insects.
Unfortunately, the spread of Bantu and the colonization of whites have significantly reduced the number of large carnivores and herbivores that inhabited these lands in past centuries: the white rhino is represented by a few specimens in a Zululand reserve; the elephant survives only in the temperate forest of Knysna and in Kruger National Park; here there are also numerous lions, who live freely also in the northern Trasvaal. There are numerous rodents (about 150 species) and felines, such as the wild cat, the lynx, the leopard and the leopard. There are 350 species of reptiles, 125 of which are snakes, such as cobras, pythons and vipers; the spread of crocodiles is limited to the north-eastern section of the country. There are numerous spiders, scorpions and insects as well, of which at least 40,000 species are estimated to exist in Southern Africa. The birds are represented by over a thousand species: there are numerous parrots and birds of prey, such as the eagle, the hawk, the kite, the owl, the owl and the serpentarium, which enjoys the reputation of snake killer and as such is respected and protected; ostriches live mainly in savannahs and steppes. Fish, of which at least 200 species are known, abound in river waters; eels live only in the waterways that pay to the Indian Ocean.