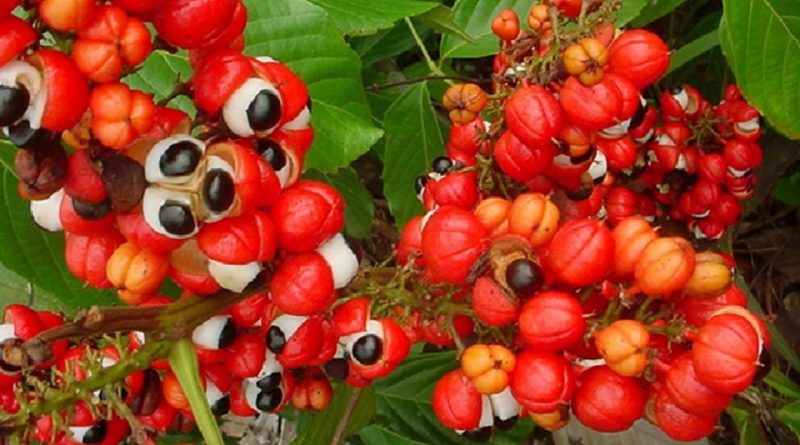 Systematic –
From a systematic point of view it belongs to the Eukaryota Domain, Kingdom Plantae, Magnoliophyta Division, Magnoliopsida Class, Sapindales Order, Sapindaceae Family and therefore to the Genus Paullinia and the Species P. cupana.

Etymology –
The term Paullinia of the genus was dedicated in honor of the Danish physician Simon Paulli (1603-1680).
The specific cupana epithet is most likely in honor of the Sicilian monk and botanist Francesco Cupani, author of Hortus Catholicus.

Geographical Distribution and Habitat –
Guarana is a plant native to the Amazon rainforest where it grows spontaneously along rivers.
Outside of this area, it is also cultivated for industrial purposes, especially in the municipalities of Maués and Urucarà, located along the Amazon River, east of Manaus. 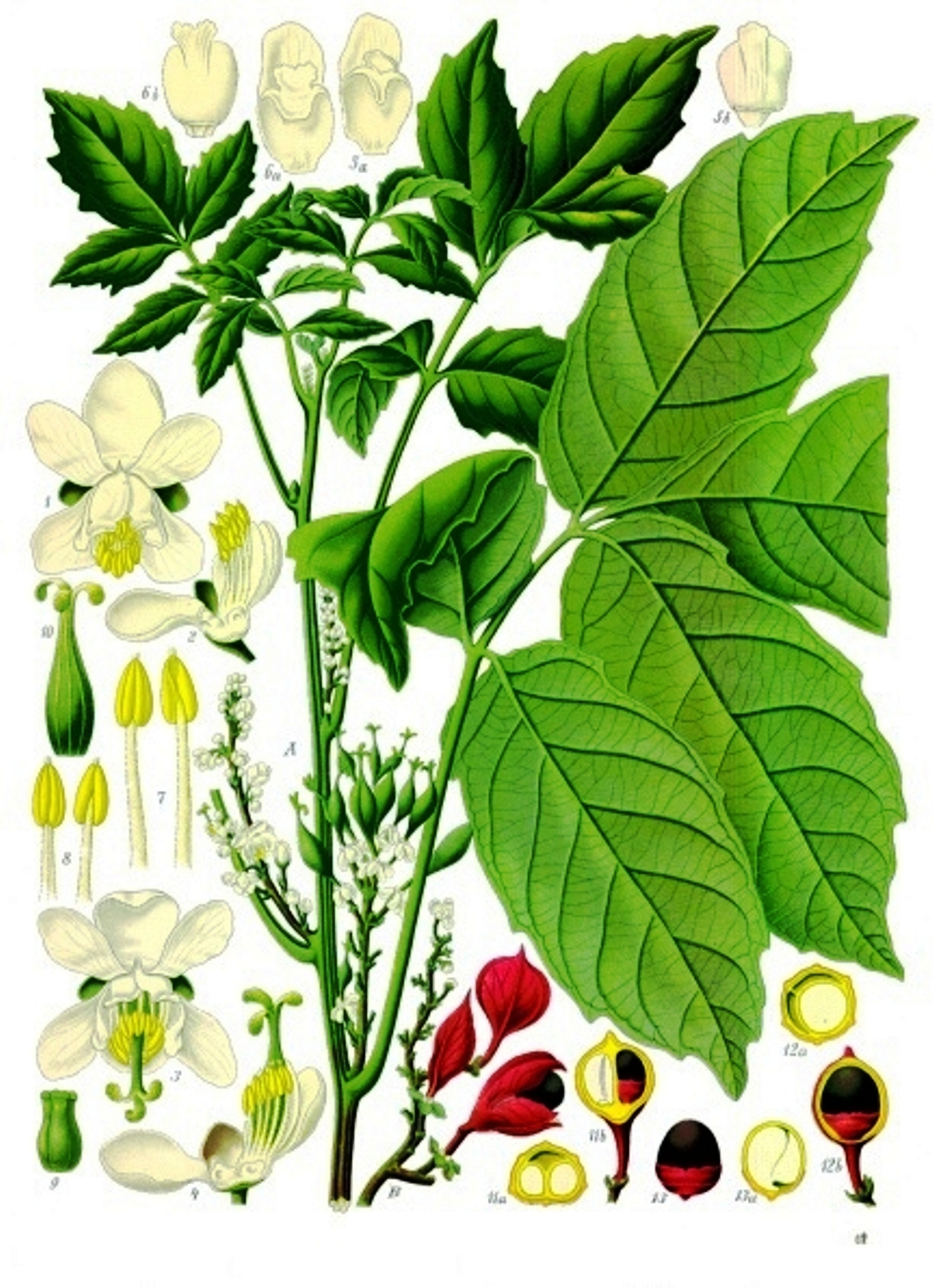 Description –
Paullinia cupana is a climbing lianosa species that in its spontaneous state can reach even thirteen meters in height.
The plant, inside the forest, finds support on other trees but can grow erect even without support.
The bark is thin, green in the younger parts which, over time and on the trunks, takes on a brown color.
The leaves are alternate, supported by a short petiole, leathery, shiny green on the upper page and opaque green on the lower one; the margin is whole and the main ribs are pinnate.
The flowers are white, briefly pedunculated, single or, more often, collected in groups of up to fifteen / twenty.
The fruit is a very consistent drupe with a flame-red parchment epicarp; the mesocarp is parenchymatous, whitish in color that encloses the endocarp (i.e. the seed) of a woody consistency, which when dried takes on the size of a pea.

Cultivation –
Guarana is a plant which, when grown in intensive systems, is kept in the form of a sapling or shrub, no more than two / three meters high, to facilitate the collection of seeds.
Guarana plants are grown in tropical areas, where there are real guarana plantations, industrially exploited; it is an easy-to-grow plant, which needs an average temperature close to 15-18 ° C, even during the cold season, which is why it cannot be grown outdoors in Europe.
The long-standing plants are satisfied with the water supplied by the rains, but in general the young plants are watered in periods of particular drought or heat; they generally tolerate drought without problems, and do not tolerate cultivation in humid places or in conditions of poorly draining soil.
Multiplication occurs by semi-woody cutting, to be carried out in the summer; the cuttings are rooted in a mixture of peat and sand in equal parts. The young plants are planted after reaching 35-40 cm in height in a container. In spring it is possible to sow the large seeds, even directly at home.

Uses and Traditions –
The name Guarana derives from the term guaraní guara-ná, which in turn derives from the warana of the Sateré Mawé.
Paullinia cupana was already used in ancient times by the Indian peoples of the Amazon, as a medicinal and sacred plant.
It was especially sacred to the Guaraní population.
There are many legends and myths on this plan; according to one of these, in a very remote time, Cereaporanga, a girl with a gentle appearance and soul and protected by the goddess of beauty and life, met a brave warrior of an enemy tribe and fell in love with him. Their love could have overcome everything, but the two lovers would never have been able to end the hatred that had existed for years between the two tribes; so they decided to flee together to be happy. On the way Cereaporanga met an injured anaconda and, despite the danger, her sweet heart pushed her to help her; he treated her with all his affection, but did not know that this gesture would be fatal.
It was because of this pause that the warriors of his tribe came closer and closer; then, realizing that she was being chased and certain that her man would be captured and killed, she established a pact of love and death; he asked the big snake to hold them, with all his strength, in their last embrace. The Indians, seeing the two lovers in their last gesture, were desperate for the death of their protege. They immediately asked the goddess of beauty and life for help so that at least the woman’s spirit would not abandon them; so the goddess, moved by the gesture of Cereaporanga, gave birth to a plant from her eyes, the fruits of which, when opened, two splendid black eyes; just like those of the most beautiful girl.
Beyond myths and legends, the fruit of Guarana has always been considered by the Indians as elixirs of long life; its importance was high in all the various tribes, since it provided them with food and means to treat diseases, prepared and supported the organism.
The Guarana plant was used for its tonic-stimulating effects and was therefore used to increase physical endurance, for hunting, etc. Many tribes of Indians, however, went beyond this blatant effect and also used this plant to fight diarrhea, to relieve menstrual pain, for the diseases that weakened – and also to be able to better see / understand the things around us; a purpose certainly linked to the fact that the plant itself has eyes to see.
Only the seeds of Guarana were used.
Each tribe had its own method of preparing them.
In general, especially in Brazil, the preparation involves the collection of the bunches, choosing the fruits when they are semi-open, which are placed in containers filled with cold water to extract the epicarp and, after cleaning, they are toasted on a slow fire on the same day of collection; subsequently they are beaten.
Once the seeds have been reduced to powder, add a little water, continuing to crush them until they form a homogeneous paste. This dough is given a “loaf” shape and brought to the sun, after which it is fumigated by the fire of resinous branches. This loaf is then grated when needed.
In Venezuela, on the other hand, the seeds stripped from the wrappers are shredded in hot water, added with cassava flour, left to ferment for a certain time and kneaded with boiling water until obtaining a paste that is dried and fumigated.
Guarana seeds are used in herbal medicine and in western medicine, properly dried and ground; Guarana powder has stimulating effects, containing caffeine and theobromine. It is used as a stimulant, but also as an analgesic, aphrodisiac, disinfectant.
However, there is still no scientific evidence on the therapeutic properties of Guarana.
Furthermore, apart from the exciting substances present, such as caffeine, the presence of traces of substances still unknown and neuroactive in the millesimal presence is supposed, of which the neurological action is not yet known, with a marked action towards excitability .
It is highlighted, among other things, how some of the active ingredients contained in the poor guarana can become toxic if consumed continuously and in large doses.
Some of the most common neurological undesirable effects are: agitation, hyperexcitability, nervousness, insomnia, arrhythmias of various kinds in predisposed subjects, arterial hypertension.
Dried Guarana seeds have the following average composition: Vegetable fiber 49%, Starch 9%, Water 7-8%, Pectin, dextrin, mineral salts, malic acid 7-8%, Tannic acid 5%, Guaranine (caffeine) 4 -5%, Fixed oil 2-3%, Piro-guarana acid 2%, Glucose 1% and Saponins 0.06%.

Method of Preparation –
Guarana is used, both on a food and medicament level, especially in South America.
From Guarana you get a famous drink, slightly sparkling, called “guarana”, similar in appearance and taste to the various types of cola-based drinks, which has a subtle stimulating effect and a sweet taste. For its medicinal use, it can be found in tablets, sticks or, better yet, in powder form. Lately, on the European market, there are also candies and chocolates based on guarana.