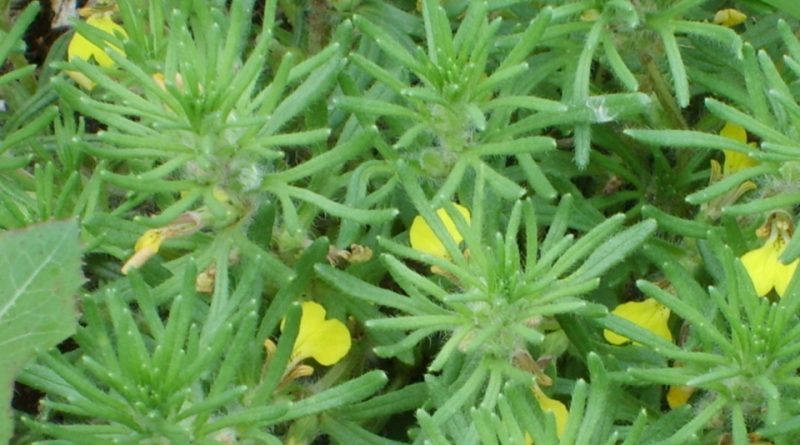 The Ground-pine (Ajuga chamaepitys (L.) Screb., 1774) is a herbaceous species belonging to the Lamiaceae family.

Etymology –
The term Ajuga derives from the Greek privative prefix α- a- and from jugum giogo: probable reference to the absence of the upper lip of the corolla. According to Pliny, the name could be the corruption of abigo expel, reference to the medicinal properties of the genus.
The specific epithet chamaepitys comes from the Greek prefix χᾰμαι-chamai- on the ground, creeping, bottom, dwarf and from πίτυς pítys pine: small pine, due to the appearance of the leaves.

Geographical Distribution and Habitat –
The Ground-pine is a Mediterranean species of ancient introduction to the northern limits of the area, present in all regions of Italy. Outside Italy, in the Alps, this species is found in France (all Alpine departments), in Switzerland (cantons of Valais, Ticino and Grisons), in Austria (Länder of Styria and Lower Austria). On the other European reliefs connected to the Alps it is found in the Black Forest, the Jura Massif, the Massif Central, the Pyrenees, the Balkan Mountains and the Carpathians.
Its habitat is that of arid meadows, pastures and uncultivated lands; but also the fields and crops, where it prefers a limestone substrate but also calcareous / siliceous with basic / neutral pH, low nutritional values ​​of the soil, with an altitude distribution from the sea level to about 1500 m. 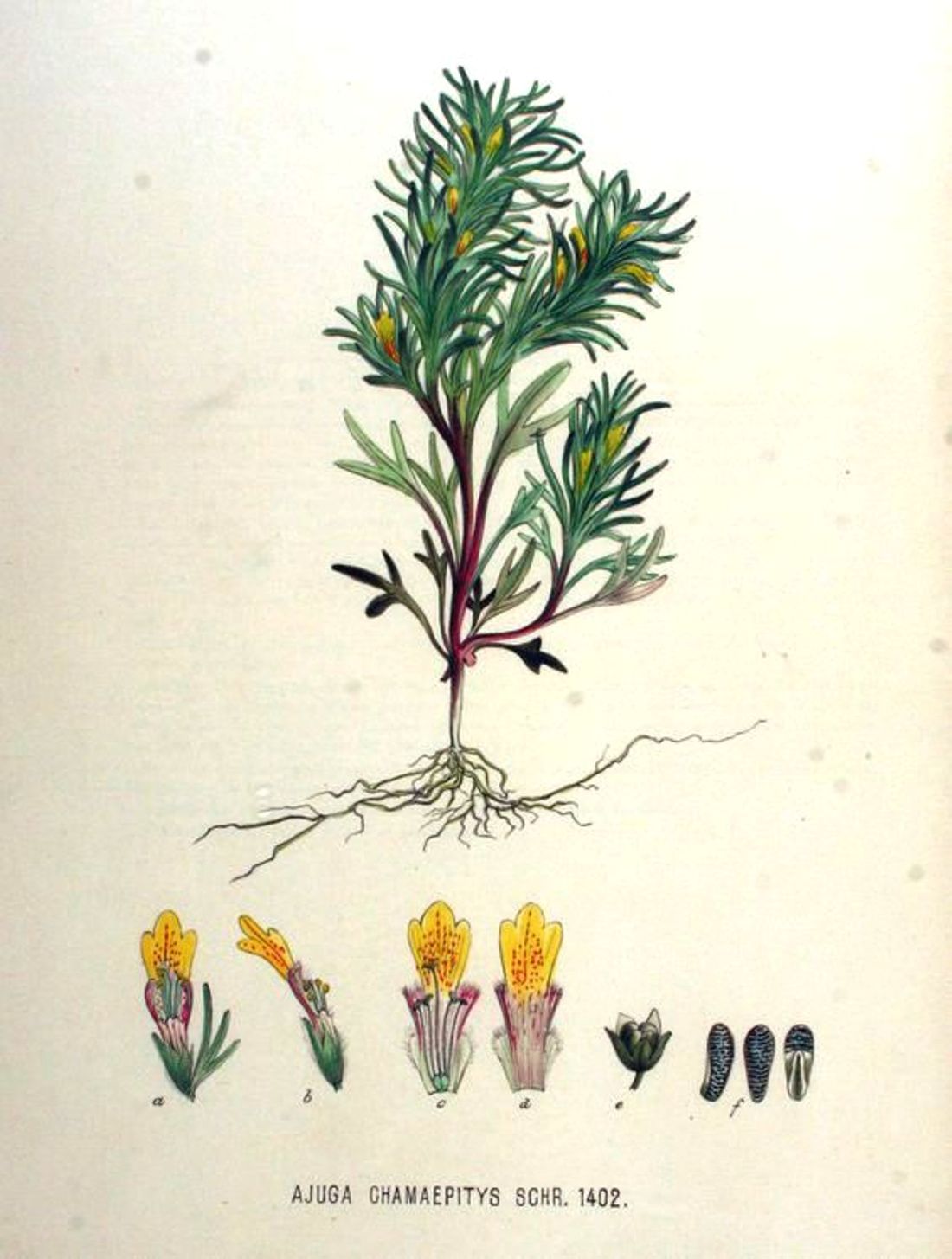 Description –
Ajuga chamaepitys is an annual, hairy herbaceous plant that grows between 5 and 20 cm.
The stem is branchy with a prostrate habit and ascending at the apex, with a quadrangular section with collenchimatic bundles placed at the corners.
The roots are of the collated type (taproots).
The leaves are arranged in an exposed manner along the caule, with the basal ones being petiolate, while the upper ones are sessile. The leaf blade is completely divided into three linear three-pronged lacinias, and is at least 5-6 times longer than wide. There are no stipulations. The lacinias have a width of 1 – 2 mm and a length of 15 – 20 mm.
The inflorescences are verticillo ears with mostly solitary flowers. Each bundle has 2 leaf-like bracts.
The flowers are hermaphroditic, zygomorphic, tetrameric (4-cyclic), i.e. with four verticils (calyx – corolla – androceo – gynaeceum) and pentamers (5-mere: the corolla and the calyx are 5-parts). Flower length: 10 – 17 mm.
The calyx is a gamosepal with five teeth (the base of the calyx is a gouged tube); the type of glass is more or less actinomorphic. The surface is pubescent and sparsely glandular. Length of gouged tube: 4 mm; tooth length: 2 – 3 mm.
The corolla, with a more or less cylindrical shaped basal part, is gamopetala with lobed apices. The androceum has four didinami stamens, two large and two small and all fertile (a fifth posterior stamen is always aborted). The filaments are adorned with the corolla. The stamens are partially protruding from the corolline tube. The display cases are of the divergent to divaricated type (they flow into the area of ​​dehiscence). The pollen grains are of the tricolp or exacolpated type.
The gynaeceum has the upper ovary formed by two welded carpels (bicarpellar ovary) and is 4-locular due to the presence of false septa. The placenta is axial. There are 4 ovules (one for each presumed niche), they have an integument and are tinned (with the nocella, the primordial stage of the egg, reduced to a few cells). [13] The stylus inserted at the base of the ovary (gynobasic stylus) is of the bifid filiform type; the stigmas (there are two) are simple. The nectary is abundant.
The antesis is from April to October.
The fruit is a micro-base (tetranucula) with ovoid mericarpi (nucule) of about 3 mm, cross-linked, with clearly visible foveole.

Cultivation –
The Ground-pine is a spontaneous plant that grows on calcareous or limestone-siliceous soils with a pH between the basic and the neutral, tendentially arid and poor in nutrients. It can grow up to 1500 m a.s.l. about.
The cultivation of this small plant is easy, both in open ground and in pots or boxes. It is sown in early spring directly at home, in rows 15 cm apart. Thinning is carried out when the seedlings have reached a height of 3-4 cm, leaving a plant on the row every 7-8 cm.
Nitrogen fertilizers and periodic irrigations allow a better development of the plant.

Uses and Traditions –
The Ground-pine, is a plant Plant used since ancient times, under the name of “cypress of the fields”, whose first medicinal descriptions were by Dioscorides, physician, botanist and ancient Greek pharmacist who exercised in Rome at the time of the emperor Nerone. Even Gaius Pliny Secondo, who was a Roman writer, admiral and naturalist, knew this plant with the name of “Abiga”.
Ajuga chamaepitys is an entirely and strongly aromatic plant, as there are glands that contain ethereal oils; according to medicine, it is a plant with medicinal properties: it is used as anti-rheumatic, as it relieves pain due to joint inflammation, diuretic, anti-gouty, choleretic, emmenagogue and stimulant, as it invigorates and activates the nervous and vascular system.
In the official Italian pharmacopoeia this plant appears with the name of Ivae arteticae herba and was once used as a diuretic and blood purifier.
For therapeutic use, the entire aerial part of the plant is used.
The active ingredients of the plant are: resins, bitter substances, tannins, salts of organic and inorganic acids.

Method of Preparation –
Ajuga chamaepitys is used for both internal and external use.
For internal use, infusion and alcoholic tincture are used.
The infusion is prepared with 30-40 g of aerial part of the dry plant per liter of boiling water. It is left to rest for 5-10 minutes, then it is filtered. It is taken in cups: 2-3 per day as a diuretic and purifying.
It can also be used as a regulator of menstrual flows, but in this case it must be taken for three days before the presumed start of menstruation. In dysmenorrhea, the menstrual cycle is just started.
The tincture is prepared with 200 g of parts of the dry plant per liter of alcohol at 50 °. It is left to macerate for a week, then it is filtered and left to rest for about ten days. It is administered at a dose of 40 drops per day in two times, according to the indications described for the infusion.
For external use the decoction is used, prepared with 50-100 g of plant per liter of water. It is left to boil for 10 minutes, then it is cold filtered. The decoction is used for washing or for preparing tablets on damaged or ulcerated skin. It is useful to repeat the treatment, especially in deep wounds, 2-3 times a day.
The Ground-pine is harvested at the moment of flowering (optimal balsamic time) from May to July on dry days, when the dew has disappeared. Cut the plant just above the root with a scissor. It is useless to pay attention to the radical part, because being a generally annual plant, after fruiting it goes to death.
For drying, the aerial part of the plant is placed on trellis, in the shade, in well-ventilated rooms. The dried plant should be kept in paper or canvas bags, and renewed every year.