The dragon tree (Dracaena draco L.) is a shrub-like species of the Agavaceae family.

Systematics –
From the systematic point of view it belongs to the Eukaryota Domain, United Plantae, Magnoliophyta Division, Liliopsida Class, Liliales Order, Agavaceae Family and therefore to the Dracaena Genus and to the D. draco Species.
The terms are synonymous:
– Asparagus draco L .;
– Yucca draconis L ..

Etymology –
The term Dracaena comes from the Greek δράκαινα drákaina, the female of the dragon (δράκων drákon dragon); the red resin of a species of this genus is sold as dragon blood.
The specific draco epithet comes from draco, draconis (in Greek δράκων drákon) dragon, dragon: reinforcing epithet of the genus.

Geographical Distribution and Habitat –
The dragon tree is an endemic plant of Macaronesia where the total population is reduced to a few hundred specimens, of the islands of Cape Verde (especially in São Nicolau, where there are about a hundred specimens, and in Santo Antão) and of Madeira, where only a few wild specimens remain.
In recent times the subspecies Dracaena draco subsp. Has been determined. Ajgal, which is widespread in Morocco, in the region of Anezi, in the Anti-Atlas mountains, where a colony of several thousand specimens has been identified. 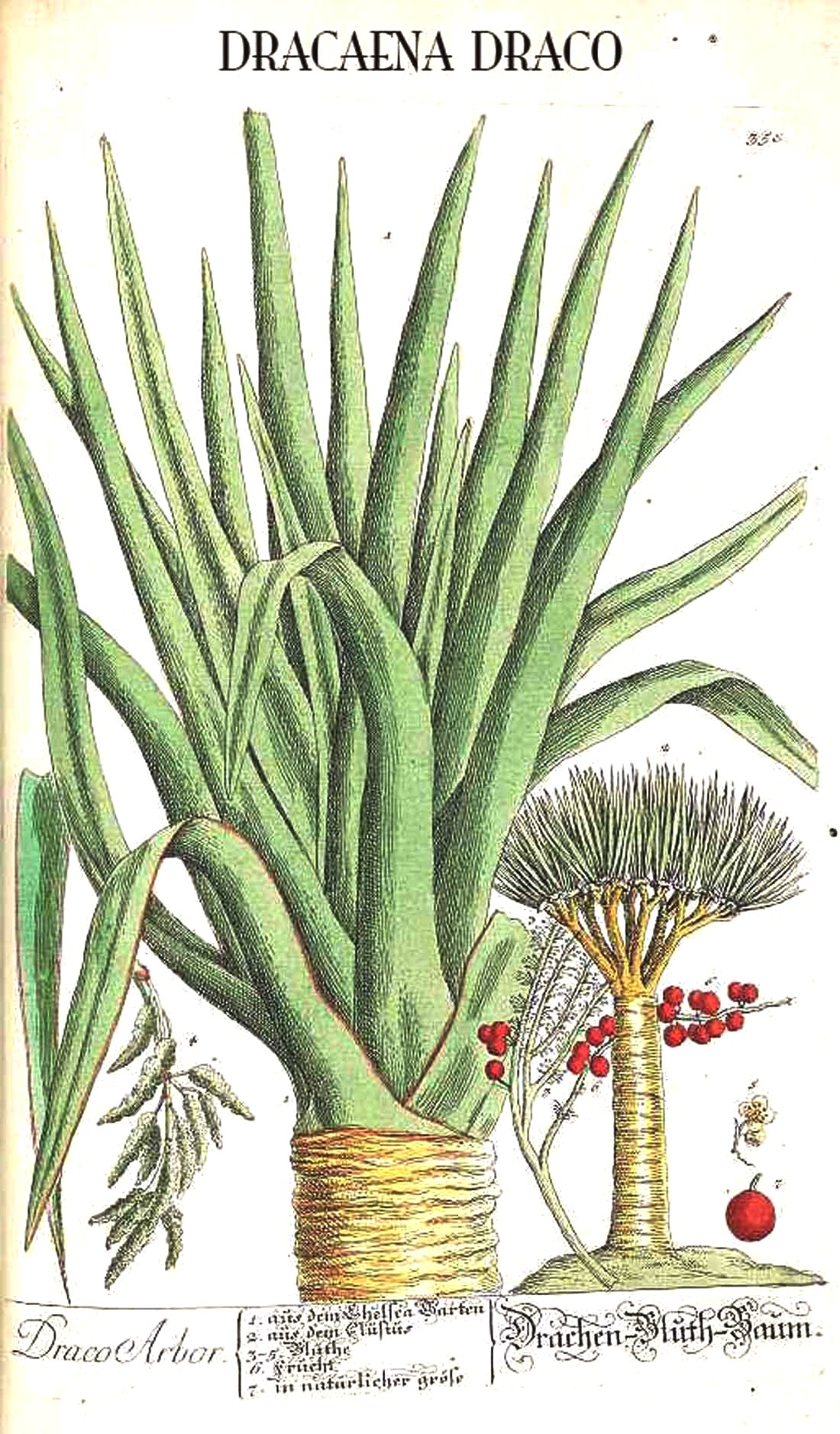 Description –
The dragon tree is a shrub-like species that can reach up to 20 meters in height.
It is recognized by its dark gray trunk which is divided dichotomically into branches, at whose apex rosettes of leaves are formed; these are leathery in consistency, lanceolate in shape and glaucous green in color and arranged to form an umbrella-shaped crown.
The flowers form on terminal racemes and are greenish-white in color.
The fruits have a size of 1-1.5 cm, with a fleshy consistency and a rounded and orange color.

Cultivation –
For the cultivation of Dracaena draco, bear in mind that they are slow-growing plants that take about a decade to reach a height of 1 m.
Today the oldest specimens found are believed to be millennial; the oldest living specimen is found in Icod de los Vinos, in the northwestern part of Tenerife.
Being a monocotyledon, the Dracaena draco does not show annual rings and the age can only be estimated based on the number of subdivisions of the branches.
For its cultivation it is necessary to choose a relatively bright area.
They are plants that need moderate water and, in any case, it is always necessary to let the soil dry between one watering and the other, without letting it dry out, especially since they are plants susceptible to root rot. The soil must therefore be possibly loose and well drained.
For the temperature remember that this plant is more tolerant to cold than other species of Dracaena and can tolerate briefly temperatures below 10 ° C.
For the supply of nutrients remember to intervene, possibly, every six months with controlled release fertilizer or, better still, organic. Well-fed plants will develop a slightly reddish tinge on the leaves.
For plants grown in pots remember to choose heavy pots (in terracotta) and repot annually or every two years. As this plant grows slightly in pots, care must be taken that the plant does not become too heavy and topples over.

Uses and Traditions –
The dragon tree has a long historical tradition.
For the Guanches, the indigenous peoples of the Canary Islands, this tree possessed magical properties. This belief is partly due to the fact that when the bark or leaves are cut, they secrete a resin that oxidizes to a reddish color, known as dragon’s blood.
Furthermore the dragon’s blood was already known to the ancient Romans, who used it as a dye, and in the Middle Ages it was much sought after by magicians and alchemists who attributed therapeutic virtues to it. In the eighteenth century it was used as a mordant for mahogany.
The dragon tree is the plant symbol of Tenerife.
From the biochemical and pharmacological point of view, Dracaena draco contains molecules such as benzoic and benzoylacetic esters of resinotannols and resinols. The Dracocarminium (C31H24O5) and Dracorubino (C32H24O5) molecules have been isolated. The Dracocarminium and the Dracorubino are the pigments responsible for the red color and the use of dragon’s blood as a dye. In fact, since the seventeenth century it has been used by master luthiers to finish violins and to give the intense color we know to the wood of bowed instruments.

Preparation Mode –
The extraction of the dye takes place by making incisions on the bark from which the resin gushes out which, in contact with the air, oxidizes taking on the characteristic red color. Resin formation increases in response to mechanical damage, an infestation of insects, micro-organisms or fungi such as Fusarium proliferatum or as a reaction to the presence of chemicals such as oxalic acid.
The superior quality resin is the one collected in the February-March period and, once dried, becomes crystalline, of hard consistency and with a characteristic bright red color; the lower quality resin differs from the first in the collection period, due to the presence of small pieces of bark inside it and the dark red color.