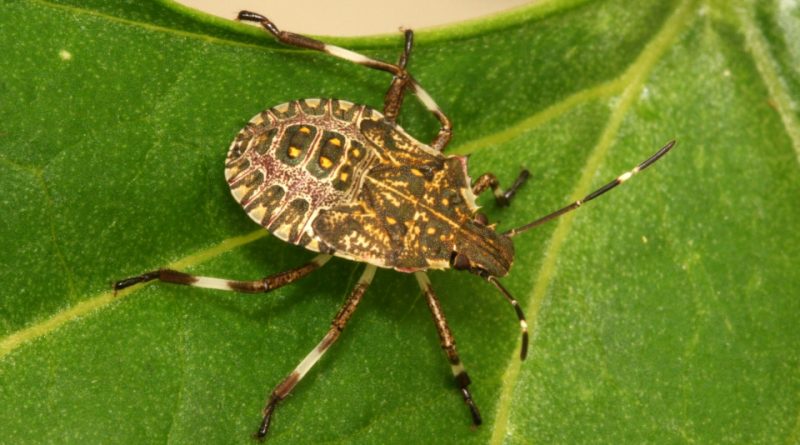 The brown marmorated stink bug (Halyomorpha halys (Stål, 1855)) is an insect of the Pentatomidae family.

Geographical Distribution and Habitat –
Halyomorpha halys is a bedbug native to an area between Japan, China, Korea and Taiwan. This insect was accidentally introduced in the United States in September 1998 where it is considered a harmful insect to agriculture and since 2010-11 it has become a stable phytophagous plant in the US orchards.
In Italy the first example was found in the province of Modena in September 2012.

Description –
The brown marmorated stink bug is recognized because the adults are between 12 and 17 mm long, with a characteristic shield shape, typical of other bugs, and with various shades of brown on the upper part and on the lower side, with shades of gray, off-white , black, copper and bluish spots.
Furthermore, there are alternating light bands on the antennas and alternating dark bands on the outer edge of the abdomen.
The legs are brown with faint white patches or stripes.
The outlet of the odoriferous glands is located on the lower side of the thorax, between the first and second pair of legs, and on the dorsal surface of the abdomen.
This bug can be confused with other bugs already present in Italy such as the Rhaphigaster nebulosa, which is a particularly smelly but completely harmless gray bug.

Biology –
The Halyomorpha halys, in the areas of origin, makes only one generation per year, while in areas with a climate more favorable to this species up to four, with an average, in the temperate regions of 1-2 generations per year.
The biological cycle of this bug, which occurs between the end of May and August, sees the females mating several times in succession, with a mating phase that lasts about 10 minutes. After mating the female lays between 100 and 500 eggs, with averages around 250 eggs.
The development time of adult insects is influenced by temperature and diet which, under laboratory conditions, lasts about 50 days.
The brown marmorated stink bug gets into homes more frequently in autumn than other bedbugs.
This insect in fact survives winter as an adult, inside houses and other shelters starting from the coldest autumn evenings, often gathering with thousands of individuals in the wintering sites.
The average life span of adults varies from several months to a year.
Once reached the site where it winters it enters a state of hibernation, waiting for the end of winter; however, it occurs that the heat inside the house can cause them to become active again, finding them flying around chandeliers or light sources.
When spring arrives, these bugs move from the wintering sites to the host plants to feed themselves.

Ecological Role –
The brown marmorated stink bug is a polyphagous insect that can affect various fruit trees (apple, pear, peach, plum, etc.), vines, vegetable plants (tomatoes and other solanaceae), legumes, cereals and ornamental plants.
Its presence, in addition to causing damage to these plants, is particularly annoying as adults enter the masses in homes to winter for the fall season and for the tendency to regroup, unlike the Nezara viridula (green bug) in several tens of individuals.
The behavior of this bug in the various countries is very different; so in Japan it attacks soy and fruit trees, while, for example, in the United States it infests, starting from the end of May or beginning of June, a wide range of fruit trees and vegetables including peach, apple, bean, soy, cherry, raspberry and pear.
The damage is due to the fact that the Halyomorpha halys, to feed, perforates the integuments of the host plant by means of its modified mouth apparatus; this feeding method involves, in part, the formation of dimples or necrotic areas on the external surface of the fruits, the punctuation of the leaf, the loss of seeds, as well as the possible transmission of phytopathogens.
The balance of the populations of this insect is linked to the biocenosis of other useful insects, including some predators. In China there is Trissolcus japonicus, a parasitoid hymenopteran of the Scelionidae family, which is a natural antagonist. Even in Italy we are trying to experiment with the inclusion of this insect within the ecosystem.
Even the rebalancing of agricultural crops, in the agroecological direction (increase in biodiversity, elimination of pesticides, intercropping, etc.) can contribute significantly to a population dynamics of this balanced bug.
Beginning in 2012, populations of indigenous predators such as wasps and insectivorous birds showed signs of numerical increase having adapted to the new food source, so the intervention with biocides can stop the normalization of biocenosis.
Among other things, the use of some insecticides, as well as unbalancing even more, in the long run the dynamics of biocenoses, are often ineffective as these insects introduce the mouthparts deep under the surface of the fruits to feed themselves. Furthermore, this bug is highly mobile, and a new population can resettle immediately after the resident population has been eliminated.
Among other things, in the case of soy infestation, it has been noted that spraying only the perimeter of a field can be effective, which considerably reduces the dangers of total “sterilization” of the biocoenoses of insects and other useful predators.
For the containment of this bug, special artificial pheromones have been developed in recent times that can be used as bait for traps.
Even if the Halyomorpha halys is not dangerous for humans it is however advisable to fight it in the moment of maximum vulnerability. To do this, some precautions are necessary to prevent insects from nesting in homes with the obvious unwelcome consequences.
In this sense, some strategies have been identified that can be summarized as follows:
– place mosquito nets or insect nets on the windows, around the chimneys of chimneys not in use, on the air intakes;
– seal cracks, crevices and all those accesses that allow the passage of bedbugs (pipes, ducts, slits, etc.).
Furthermore, to eliminate these insects it is advisable to use steam cleaning tools in order to flush out groups of bedbugs nested in bins, fixtures, pipes, etc. It is also useful to use a vacuum cleaner to collect bedbugs which can be found in places that are easier to reach or, after flushing them out, combat them with steam.
Obviously once the bedbugs are collected they must not be released outside, but they must be eliminated immediately, for example by immersing the container used to collect them in a basin of soapy water for a few minutes.
The domestic use of insecticides that are not very effective and can become harmful for people and pets is absolutely not recommended.