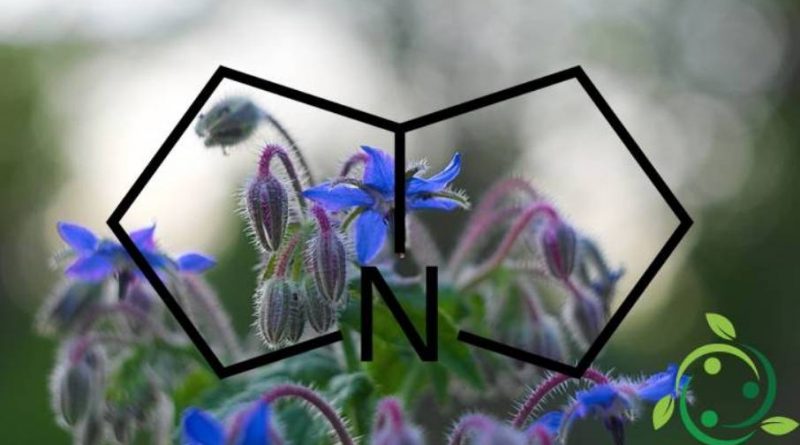 Pyrrolizidine, whose term in the official IUPAC nomenclature is: 2,3,5,6,7,8-hexahydro-1H-pyrrolizine, also known as hexahydropyrolizine.
Pyrrolizidine has a brute or molecular formula: C7H13N and is a heterocyclic organic compound that forms the central structure of a set of alkaloids also known as pyrrolizidine alkaloids.
The alkaloids derived from pyrrolizidine are present, in nature, in some plant species including: Asteraceae (for example in Senecio spp. And Eupatorium spp.), In Orchidaceae, Fabaceae (of the genus Crotalaria), less frequently in Convolvulaceae and Poaceae and in at least one species of Lamiaceae.
The characteristic of these alkaloids is that, at the level of the human organism, they have a so-called cumulative effect, so that the body tends not to dispose of them quickly and indeed to accumulate them.
Among other things, the alkaloids derived from pyrrolizidine possess a remarkable and specific liver toxicity, but they can also attack other organs, including the lungs.
Also reported in the literature are possible mutagenic and carcinogenic activities related to the high intake of these alkaloids.

For this reason, pyrrolizidinci alkaloids represent one of the most important classes of natural chemical contaminants present in food products.
The intake of pyrrolizidine-based alkaloids entails risks in connection, of course, with the continuous intake of plant species containing them.
Even foods like eggs, meat, milk or honey can still contain them, because the animals from which they derive (directly or indirectly) have, in turn, fed with floristic species in which these substances are present.
The reports of risk to public health are relatively recent: the first, relating to contamination of foodstuffs, took place in Afghanistan, India and Uzbekistan (WHO) in 1988.
In summary, as always happens in a balanced diet that follows the criteria of seasonality, occasional use is generally relatively safe, except in situations where concentrations in a plant are particularly high and subject to any personal intolerances / sensitivities or disease states .