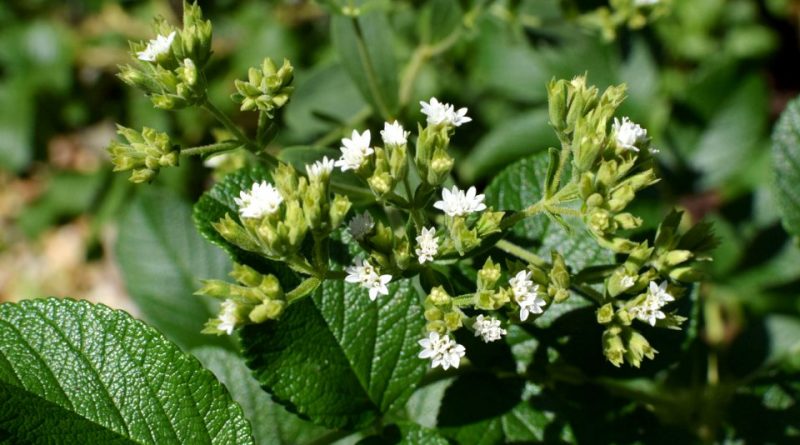 Systematics –
From a systematic point of view, it belongs to the Eukaryota Domain, United Plantae, Spermatophyta Superdivision, Magnoliophyta Division, Magnoliopsida Class, Asteridae Subclass, Asterales Order, Asteraceae Family, Asteroideae Subfamily, Eupatorieae Tribe and then to the genus Stevia and to the S. rebaudiana Species.
The term Eupatorium rebaudianum Bertoni is synonymous.

Etymology –
The term Stevia was dedicated by Antonio José Cavanilles y Palop to the Valencian prelinnean physician, humanist and botanist, Pedro Jaime Esteve (Petrus Jacobus Stevus ~ 1500-1556) who studied Stevia as a natural sweetener.
The specific epithet rebaudiana was attributed in honor of the Paraguayan chemist Ovidio Rebaudi (1860-1931) who first conducted the chemical analysis in 1899 to clarify the sweetening properties of this plant, at the invitation of the Swiss botanist Moses Giacomo Bertoni who dedicated the species.

Geographical Distribution and Habitat –
Stevia rebaudiana is a plant native to the Rio valley Monday in the northeast of Paraguay and today cultivated extensively and consumed in Thailand, Israel and China, and generally throughout South America, where it has been used for centuries as a sweetener but above all as a medicinal plant. Currently, since the European Union allowed the use of this sweetener as a food additive on April 14, 2010, its cultivation is expanding in Europe as well as in other countries where it is gradually being allowed to be used. Its habitat is represented by the areas with warmer temperatures, on poor, sandy soils, with a superficial water bed, on the margins of the marshes and grasslands. 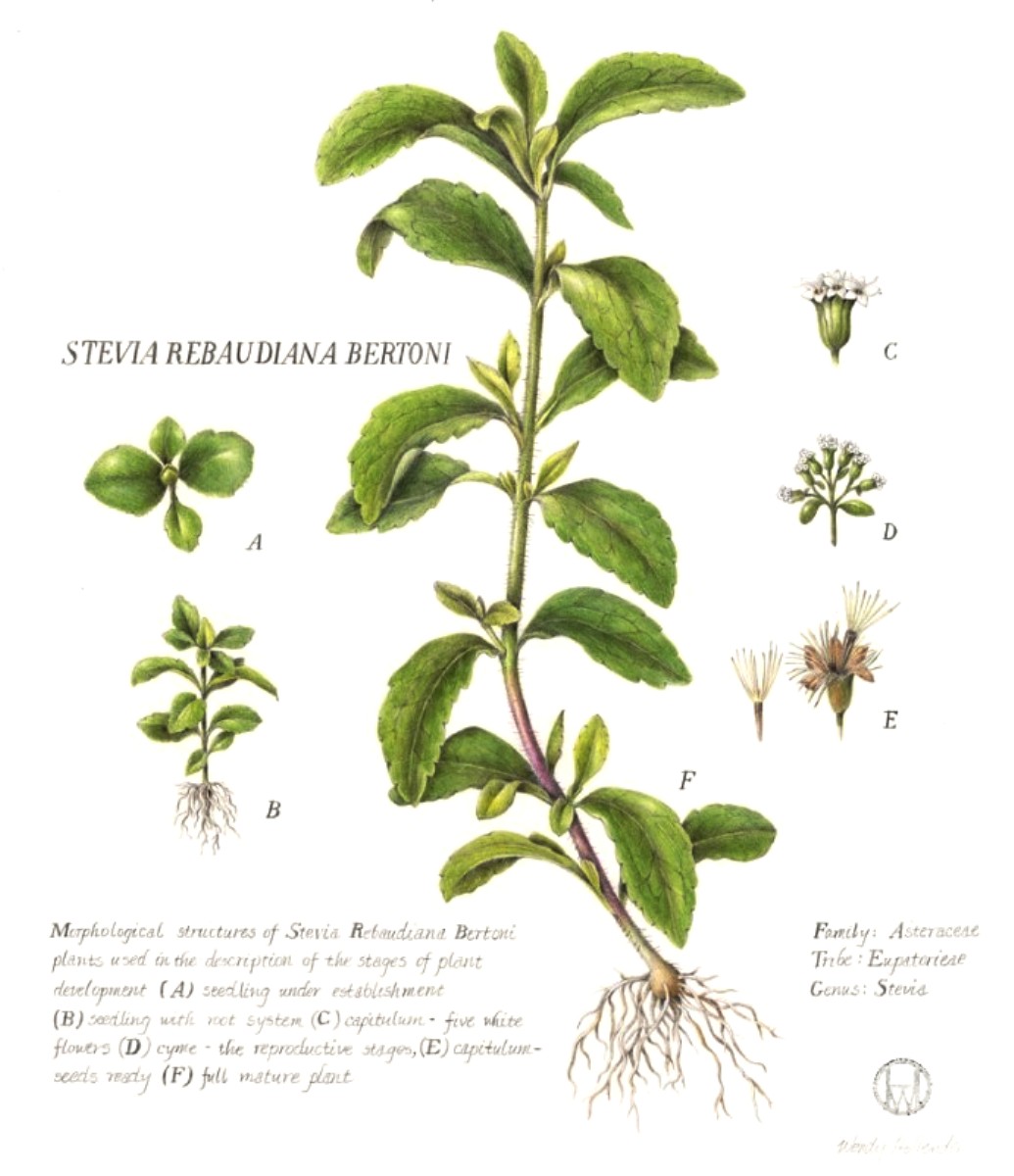 Description –
Stevia rebaudiana is a perennial species, or perennial seeds depending on the growth top, with an average height of about half a meter.
The leaves are ovate, opposite and the flowers are small, numerous, of whitish color, hermaphrodite and pollinated by insects.
Antesis occurs in the late autumn period.

Cultivation –
Stevia rebaudiana grows, in nature, on poor, sandy soils, with a shallow water table. The optimum cultivation temperature is around 23 ° C but it is a plant that is resistant to values ​​close to 0 ° C.
It is a species that has high demands on potassium and nitrogen, as well as iron and manganese among microelements. On average, for the production of about 7500 kg of biomass 180 kg / ha of potassium, 105 kg / ha of nitrogen and 23 kg / ha of phosphorus are removed.
Important is the irrigation contribution that must be ensured after the transplant and before the collection of the leaves. Where the climate allows a second harvest, post-harvest irrigation is essential to encourage the release of sprouts. Subsequently, during the dry season it is necessary to provide emergency irrigation.
The plant usually reproduces by seed, and multiplies by cuttings with a good success rate. The seeds, being very small, are usually mixed with sand before sowing to avoid too thick a distribution. The percentage of germination is modest. It is advisable not to dry the soil during germination. The seedlings are transplanted individually when they put the second pair of real leaves, planting them outside after the last frosts, and providing them with some protection until the plant is well underway.
In Italy the best period for transplanting falls in the month of April due to the mild temperatures and the frequent rains that ensure a good rooting of the seedlings and a uniform development.
The plants should be planted with a density of 5-6 plants per square meter and with an inter-row spacing of 60 cm. Normally 2 harvests are obtained, the first of which in July and the second generally more abundant in September-October.

Uses and Traditions –
The first information on the existence of this plant dates back to its use by the indigenous Guarani who called it with the name of caà-ehe (sweet grass) and used it to cover the bitter taste of the Ilex paraguayensis with which it was prepared an infusion called : “Mate” (the tea of ​​Paraguay) slightly exciting for a low caffeine content.
But stevia, known by many peoples of the South American geographical area for several millennia, as well as for the sweetening power of its leaves, has been used for centuries, and is still used today, for its medicinal properties, as an anti-inflammatory and antioxidant.
Of all the approximately 150 species of Stevia the rebaudiana is the only one with important sweetening properties, in fact the leaves of this plant contain a complex set of terpenic glycosides, substances that are characterized by the presence in their structure of 3 molecules of glucose. Of the 4 sweeteners (stevioside, rebaudioside A, rebaudioside C, dulcoside A), which are found in higher concentrations in the leaves, stevioside (3-10% of the dry weight of the leaves) and rebaudioside A (1-3%) have a sweetening power of 110-270 and 180-400 times respectively compared to sucrose.
Unlike sugar, the active ingredients have no nutritional power (zero calories), and are relatively stable over time and at high temperatures, so they perfectly preserve their characteristics even in baked goods or hot drinks, unlike other synthetic sweeteners as aspartame, which undergoes degradation.
The use of Stevia rebaudiana, in food products, has been limited in the past in Europe and the USA since some of its components at the tested doses, such as steviol and stevioside, were considered genotoxic. Following this, the Food and Drug Administration (FDA) admitted its use only as a dietary supplement, but not as an ingredient or food additive. Finally, the FDA approved rebaudioside as a Food Additive in 2008. At European level, EFSA approved the use of stevia as Food Additive on April 14, 2010, as it is accepted in Switzerland, and historically in all Latin American countries.
Furthermore, in July 2012, the production and sale of Stevia within the European Union as a food sweetener was authorized. The European Commission’s Health and Consumer Protection Directorate-General has approved the regulation of stevia extracts (steviol glycosides) to be used as a sweetener at European level.
The possible use of stevia, in countries other than those of origin, has produced considerable controversies and disputes, suggesting a commercial conspiracy, interested in contrasting its use, to favor artificial sweeteners.
In fact, this plant is normally consumed in many countries, some of which have been in use for some time and without any particular problems.
Examining such data from countries that use it commonly, even for a long time, FAO and WHO have established a “maximum daily dose” of steviol of 2 mg / kg body weight. This limit, in the FAO study, presents a safety factor of 200, ie it is 200 times lower than the quantities that can be considered “excessive”, and therefore negatively affecting health.
Considering the average content of the extracts, it would appear that a fresh leaf, or a quarter of a teaspoon of dried leaves, corresponds to a tablespoon of sugar (during drying the weight of the fresh plant is reduced by 80%).
Stevia is now used in Coca Cola in Japan as a sweetener for Coca Cola Light (Diet Coke).
Stevia can be used both in the form of fresh leaves and in powder form, dehydrated extract or aqueous and / or hydro-alcoholic liquid extraction concentrate, as a zero-calorie sweetener.
These products have similar uses as artificial low-calorie sweeteners and are used mainly as sweeteners to improve the taste of food and beverages do not raise the level of glucose in the blood.
Stevia rebaudiana is used in medicine as an anti-hyperglycemic agent for the treatment of skin diseases, in the treatment of hypertension due to its cardiotonic action and for many other diseases.

Preparation Mode –
When Stevia is used in the kitchen as a pure product, it should be dosed sparingly, accurately measured in quantity, because its persistent sweetish aftertaste may be too strong.
It must be considered that a teaspoon full of pure stevia, which is equivalent to about 2.5 grams of product, is equal to 800 grams of sugar, or more than twice the quantity that is usually used to make a cake.
Practically, to make sponge cake, it could be enough just over half a teaspoon of pure stevia.
In any case, in the packaging containing stevia the methods of use are usually indicated, to be followed in individual cases and for specific preparations of: cakes, biscuits or other.