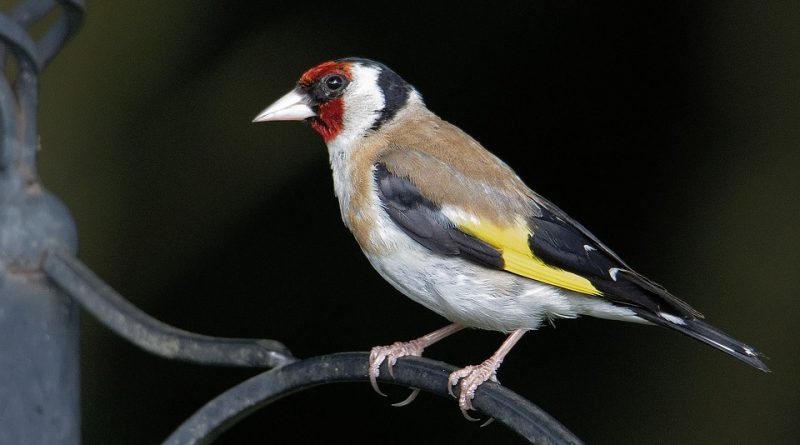 The goldfinch (Carduelis carduelis Linnaeus, 1758) is a small passerine bird of the Fringillidae family.

Geographical Distribution and Habitat –
The goldfinch is a small bird that we find in a rather vast area of ​​the Palearctic area, between the British islands, most of continental Europe (with the exception of the Scandinavian peninsula, of which the species only colonizes the southern tip), Anatolia , the Levant, North Africa and much of the lower course of the Nile, as well as European Russia and western and central Siberia (where it is summer visitor and breeder), Mesopotamia, Persia and Central Asia (where it winters) and the southern slopes of the ‘Himalaya.
In the nineteenth century the goldfinch was introduced in the Azores, Cape Verde, Bermuda, South Africa, Falkland, in many areas of the United States, Canada, Mexico, in vast areas of South America (Brazil, Peru, Uruguay, Argentina, Chile), in Oceania (eastern Australia from Brisbane to the Eyre Peninsula, Tasmania, New Zealand).
Carduelis carduelis is present in Italy throughout the national territory (including the islands), resulting particularly widespread in Campania and Sardinia. In Italy it is regular and wintering where it prefers to live in areas – even urbanized – with wooded areas. He does not like to rest on the ground, where due to his characteristics he appears clumsy and not very elegant, while he often sits on branches.
This small sparrow is suitable for many habitats. It can be seen at various latitudes, united by the presence of woods or thickets not overly thick, open grassy or bushy areas and permanent sources of fresh water. It therefore occupies various environments: from the Mediterranean scrub to the taiga, to the cutting fields to the pine forests, to the plantations and to the junipers, as well as in the anthropized areas, where it can be seen in the suburban planted areas, in rural areas and in abandoned fields with abundant growth of weeds. 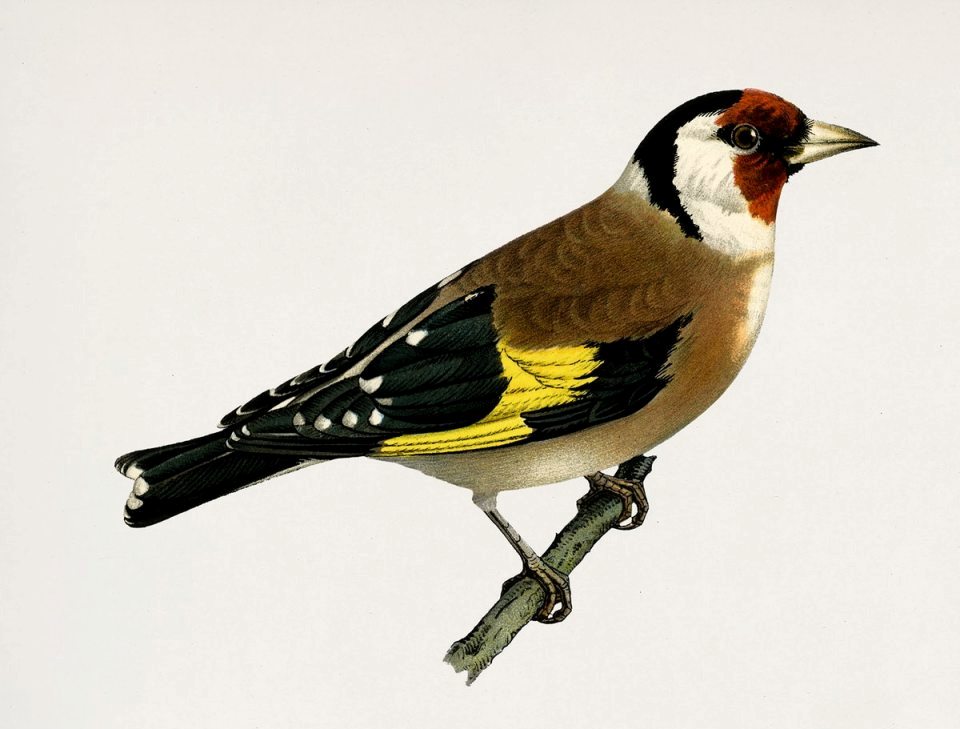 Descrizione –
The Goldfinch is a small passerine little more than 10 cm long, for about 12 grams of weight. Its livery is colorful and flamboyant, with scarlet red snout, white cheeks, black head, beige body, black wings with an intense yellow streak with a white tip. Sexual dimorphism is minimal, as there are no obvious differences between the male and the female, apart from the fact that the latter has relatively more “faded” shades. The beak is powerful and robust, suitable for breaking and piercing the seeds, which constitute almost the totality of its diet: it prefers thistle seeds, wool thistle and sunflower thistle, in addition to those of agrimony, chicory, romice, senecio, dandelion, crepe .
Small and with unmistakable plumage, legend has it that it takes its name from the thistle plant, where it was easy to meet because of the seeds of which it is greedy. According to tradition, thorny branches of the thistle are the same as those used by the Romans for the crown of thorns of the crucifixion, and another legend has it that a Goldfinch had worked to extract the thistle from the forehead of Jesus, and that he was wounded in turn by dirtying his head with the blood of the son of God, a stain that would have remained forever indelible on his livery. For this reason the Goldfinch has become the symbol of passion, and has been represented in numerous works of art from the past, for example by Raffello Sanzio, author of “La Madonna del Cardellino”.

Biology –
The goldfinch is a very lively and lively bird, with essentially diurnal habits, which spends most of the day searching for food, generally remaining in the tall grass or on the ground, and then returning to the perches at night to predefined perches. shelter in the branches of the trees, where you can rest.
The couples (they are monogamous birds) begin to form around February, with the two partners who will live in close contact until September and even later, generally joining the same flock: the males attract the females singing at the top of their lungs with the beak open and the wings adhering to the body or with the tips slightly turned downwards, swaying the body to court them once they arrive. The females sway in turn to signal interest, crouching as the male approaches and moving the tail sideways to signal their willingness to mate, allowing them to mount them.
The reproductive phase begins in the period between spring and summer: a couple of goldfinches can produce up to three broods a year, with the female laying from 2 to 7 spotted eggs, which it hatches for about 12 days. During the hatching, the male is stationed near the nest, singing frequently, keeping an eye on the surroundings to chase away any intruders or identify the approach of possible dangers and looking for food for himself and for his companion.
The nest is generally built at medium height, at the ends of the branches of firs and other conifers or on fruit trees.
The nest has the shape of a cup and is built within about a week by the female only, sometimes assisted by the male that finds part of the building material: it is generally located towards the final bifurcation of a tree branch (often a conifer ), and consists of an outer part of twigs and intertwined lichens and an inner part of vegetable fibers lined even more internally with down and fluff, all held together by cobwebs.
The chicks open blind and featherless. Parents take turns in parental care: while one stays at the nest (for the first 13-18 days only the female), removing the excrement and keeping the brood warm and safe, the other goes in search of food (seeds immature, larvae and aphids, the former in gradually increasing proportions as the days go by), which he will use to feed his spouse and children.
The young goldfinches are ready for the fledging around the 13-18 days of life: they tend however to remain still for ten days near the nest, following the parents (who generally are preparing to carry on another brood) in their movements and asking them (especially the male), although more and more sporadically, for the cue. In this way, the young are weaned around the thirty-fifth day from hatching, when they are virtually independent and generally disperse.
Goldfinches, in the wild, live about 3-4 years, while in captivity these birds (although generally considered among the finest and least long-lived cage finches) reach 10-12 years of age.

Ecological Role –
Goldfinches are mainly granivorous birds, whose diet consists mostly of the seeds of a large number of herbaceous plants: in addition to thistles, the predilection for which has given these animals both the common name and the scientific name, these birds they also feed on seeds (ripe or still green) of sorrel, agrimony, chicory, romice, senecio, tarassaco, crespigno and sunflower (revealing themselves very fond of it too), as well as the seeds of small seed trees (mainly cypress and juniper), leaflets, sprouts, berries and ripe fruit.
During the mating season, when the energy requirement is increased due to the courting and raising of offspring, the goldfinches feed mainly on insects and other small invertebrates, which are also supplied to nestlings.
Carduelis carduelis is a bird that, when it moves, does so in small flocks, especially during the winter, when it is not uncommon to observe groups of goldfinches resting on the branches next to each other, to fight the cold. Flocks are sometimes “mixed”: in fact, other species such as the Verdone or the Verzellino can be found there, with which it shares the food collection areas and can even hybridize.
A particular attraction is represented by the singing of this small bird. The song is emitted almost exclusively by the males in love (also the females sing from time to time, but they have a much less vast and rather monotonous repertoire), it appears continuous, subdued and liquid. The goldfinch song consists of three main sequences, issued randomly. These sequences do not have standardized names (as happens for example among singing canaries), but are known with numerous dialectal terms (in most cases onomatopoeic).
The sequence of these songs, issued with the right timing and the right scan between the syllables, are considered perfect by the judges of the singing competitions, and the specimens able to emit them without errors are extremely valuable. Unlike the domestic canary, the goldfinch is rather not easily influenced by external factors as regards singing, which seems to have a hereditary origin.