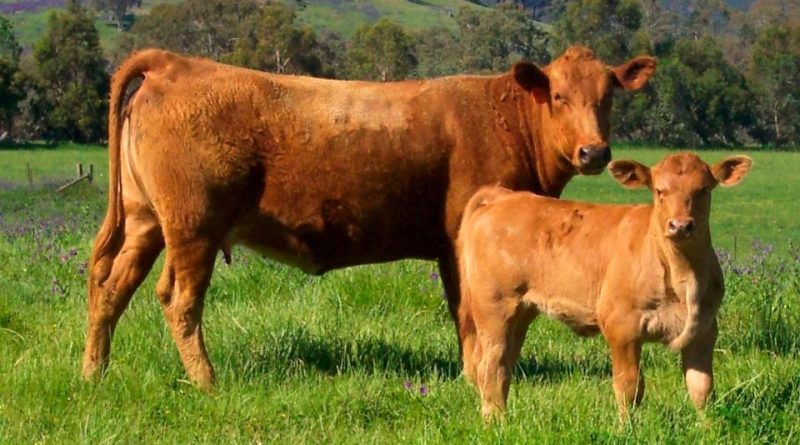 The Gelbvieh, or German Yellow, is a bovine breed (Bos taurus Linnaeus, 1758) native to the Franconian region of Germany, with a dual aptitude for the production of meat and milk.

Geographical and area distribution –
Gelbvieh is a cattle breed bred, as well as in Germany in other countries of the world; was introduced, in particular, in Spain, Portugal, Great Britain, Canada, the United States, Australia and South Africa, mainly through the use of artificial insemination and some live exports. Currently, outside Germany, it is the sixth largest breed of cattle in Canada with 3,500 registered animals each year and in the United States there are 45,000 registered Gelbvieh heads.

Origins and History –
The Gelbvieh or German Yellow and whose international name is German Yellow) is a breed originating from Franconia in Germany.
This breed originates from several districts of Bavaria around the middle of the 18th century. Originally the Gelbvieh was known as the red-yellow breed of Franconia, coming from different local breeds.
In the beginning the Gelbvieh was bred as a triple-aptitude breed, today these cattle are bred mainly for meat production.
The Gelbvieh cattle were obtained through crossbreeding in order to improve some characteristics of the breed. But the purity of the original breed must not fall below 88%, otherwise they are classified as “impure” Gelbvieh. The path for the formation of this breed starts, in the middle of the 19th century, through the crossing of several local German breeds up to the attainment of the stable characteristics of the Gelbvieh.
Some fundamental breeds have contributed to the formation of this breed, including: the Pezzata Rossa, crossed with Swiss cattle, including the brunette. South Devon and Shorthorn seem to have participated in his training. The breed was already established as stable in 1872 and its association was created in 1897. Subsequently, after the Second World War, crosses were also made with the Danish Red.

Morphology –
The morphological characteristics of Gelbvieh are influenced by the original breeds that formed it, in fact both the brown coat with dark hooves and uniform pigmentation of the body are evident.
In general the coat is uniformly light brown in color, with a musello that is usually rosy and short horns.
They are medium-sized animals, very muscular and with strong bones.
Adult females have a weight ranging between 650 and 800 kg and a height at the withers of 134-140 cm.

Production aptitude –
Gelbvieh is a dual-purpose breed, both milk and meat but predominantly for meat production.
This breed shows a good attitude for the production of meat with high yields at the slaughter; in fact they are animals known for their pasture and feed processing capacity and have been selected to reach a rapid maturity, with good loin length, thinness, docility and longevity. They are also able to adapt to many different pastures and climatic conditions
The females of Gelbvieh are very maternal with a strong fertility, good conformation of the udders and a good production of milk. Furthermore, being the smallest calf at birth, it makes the birth of these animals easier.
Milk production is at 4,700 kg / lactation, with 3.9% fat and 3.5% protein.