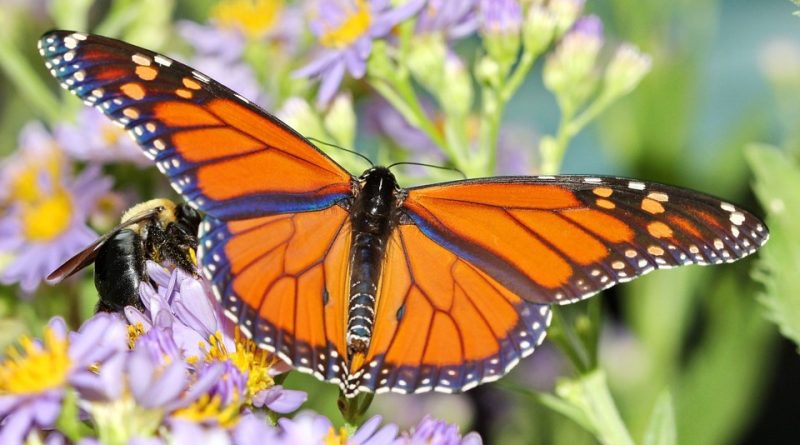 The monarch butterfly (Danaus plexippus (Linnaeus, 1758)) is a moth belonging to the Nymphalidae family.

Systematics –
From a systematic point of view, it belongs to the Eukaryota Domain, Animalia Kingdom, Subgenus Eumetazoa, Superphylum Protostomia, Phylum Arthropoda, Subphylum Tracheata, Superclass Hexapoda, Class Insecta, Subclass Pterygota, Cohort Endopterygota, Superorder Oligoneoptera, Subordinate Section, Infraorder Order Heteroneura, Division Ditrysia, Superfamiglia Papilionoidea, Family Nymphalidae, Subfamily Danainae, Tribe Danaini, Sub-tribe Danaina and then to the genus Danaus and to the species D. plexippus.
Two subspecies are distinguished:
– Danaus plexippus plexippus, which is the known migratory subspecies of most of the USA.
– Danaus plexippus megalippe, which is the non-migratory subspecies that is spread from Florida and Georgia, through the Caribbean and Central America, to the Amazon River.

Geographical Distribution and Habitat –
The monarch butterfly is native to America where it is the best known in all of North America.
This butterfly is present in almost all of America, from southern Canada to the Amazon. Since the nineteenth century it has also been found in Indonesia, New Zealand and Australia, where it is known as a migratory butterfly. In Europe it is resident in the Canary Islands and in Madeira, while in the Azores, Portugal and Spain migrant individuals occasionally appear.

Morphology –
The adults of the Danaus plexippus are recognized because they have a lively orange livery with rib ribs with black contours and two series of white spots along the edge of the wings. The wingspan of these butterflies varies from 7.5 to 10 cm. At the larval stage the caterpillar appears in black, yellow and white stripes.
Both the larvae and the adults present lively aposematic colorations, which defend them from vertebrate predators, warning them of the presence of toxic substances (cardenolides) that make them unpalatable. These substances are assimilated during the larval development by the species of Asclepias which the caterpillar feeds on.

Attitude and biological cycle –
Monarch larvae develop on plants of the genus Asclepias and on other Asclepiadaceae. The development, from egg to adult, is completed in about 30 days.
The Danaus plexippus begins its life as an egg, only to then hatch into a larva that eats its own shell and, later, the Asclepiadaceae on which it was laid and which are almost the only source of feeding of the larvae.
The growing larva becomes a colorful and succulent caterpillar, then creates a hard protective wrapper around it and enters the pupal stage. The result is an adult with a pleasant coloring based on black, orange and white. The characteristic design serves to warn predators that the insect is poisonous and has a bad taste. The butterflies that come out of the chrysalises (pupal stage) between the end of summer and the beginning of autumn are different from those that they suffer the same metamorphosis during the longest days, and with warmer temperatures, of the summer season. The first monarchs were born to fly and know, due to weather changes, that they must prepare for a long journey. Only butterflies born in late summer or early autumn migrate, making a single round trip.
The number of annual generations varies according to weather conditions.

Ecological Role –
The monarch butterfly is known for having considerable resistance to flight which allows it to make long migrations. The monarch butterfly is famous for the extraordinary mass migration that brings millions of these animals to California and Mexico every winter. The monarchs of North America are the only butterflies to make such a heavy journey: almost 5 thousand kilometers. Insects must fly every autumn before the cold comes, which can kill them if they linger too long.
This favors the dispersion of the species, which has occasionally been found even in areas very far from the original area.
The populations of North America instead make periodic migrations between the northernmost regions, where it is present only in the summer season, and the wintering areas, orienting themselves with a special sense called magnetoricezione. In autumn the butterflies fly south, forming groups of thousands of individuals. Those in the western United States reach some mountainous areas of California between San Francisco and Los Angeles, where they spend the winter in a state of semi-hibernation clinging to tens of thousands of tree trunks and branches. Those of southern Canada and the central and eastern United States reach a small valley located in Mexico at an altitude of 3000 m, where over 14 million butterflies are concentrated in a hectare and a half of surface during the winter. In the following spring, after mating, individuals of both sexes begin the return journey, during which some females stop to lay eggs; in some cases it is the next generation that completes the journey by re-colonizing the northernmost regions. Migrations north to Canada, take place in 3 generations, the return to Mexico takes place in a single generation, this is a rare case of migration in several generations.
When the winter migration of the following year begins, several summer generations have already taken place and the journey will be made by the great-grandchildren of the migrants of the previous year. Yet these new generations somehow already know the way, and follow the same routes taken by their ancestors, sometimes even returning to the same tree. Many scientists are concerned about the eastern population of monarch butterflies, which spends the summer east of the Rocky Mountains. This group presents itself in ever smaller numbers, and its survival could be threatened by a series of natural disasters in Mexican wintering areas, as well as by the decrease in the number of Asclepiadaceae acres in the summer habitat.
The Monarch is the “national insect” of the states of Alabama, Idaho, Illinois and Texas, and the “national butterfly” of Minnesota, Vermont and West Virginia. Furthermore, in 1989 it was named “national insect” of the United States of America.