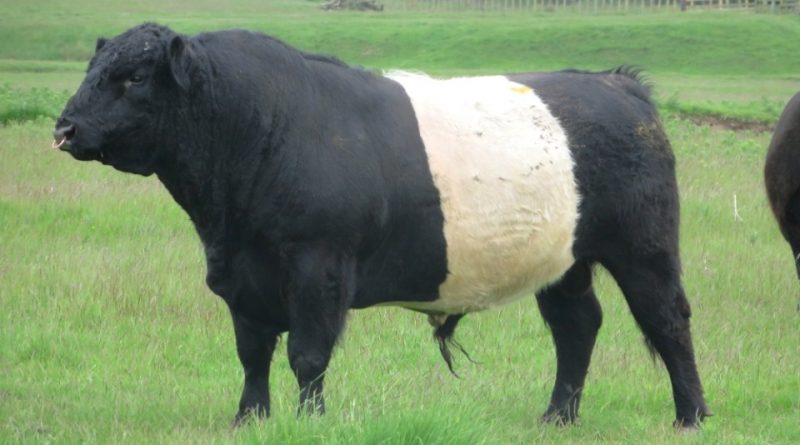 Belted Galloway, or simply Belties, is a dual breed bovine breed (Bos taurus Linnaeus, 1758), originating from the county of Galloway in the south-west of Scotland.

Geographical and area distribution –
Belted Galloway is a breed, native to the county of Galloway in the south-west of Scotland. It derives from a selection made during the nineteenth century starting from Galloway. Today it is present mainly in Scotland and the United States, where in 1951 the American Belted Galloway Breeders Society was established, now known as “The US Belted Galloway Society Inc.”
The Belted Galloways were brought to the United States for the first time by Mrs. McLean of East Kortright, New York.

Origins and History –
Belted Galloway is a breed with a fairly ancient history. There is written evidence of the existence of leaders of the Belted Galloway cattle breed in Wigtownshire which date back 400 years. Miss Flora Stuart, President of the Belted Galloway Society for 20 years and owner of the Mochrum Estate, was dedicated to these animals. Here are still bred cattle that derive from the original chiefs, the last examples of this bloodline. Their history dates back to 1890, before the start of the Galloway Herd Book, which took place in 1921. Today there are only 75 breeding cows of the original herd, without which the breed would be at risk of extinction due to crossbreeding.
Originally this breed was bred by the families of the place of origin for the production of meat and milk. In the past, the herdsmen loved to keep a specimen of this breed in front of the herd so that they could see where the animals were headed even in the dark. Today, some particularly attentive chefs and breeders keep this breed alive.
Similar breeds of cattle have been bred in south-western Scotland for centuries and in the 17th century they were developed with genealogical selection.
Currently, a flourishing breeding program is underway in the UK, supervised and led by the Belted Galloway Cattle Society.
The origin of the white belt is unknown, but it is thought to come from crossings with Dutch Lakenvelder cattle.
This breed, threatened with extinction, is listed by the American Livestock Breeds Conservancy as a “recovering” breed, which means that there are more than 2,500 annual registrations in the United States and a global population of more than 10,000.
In 2015, approximately 18,390 cattle were registered in the United States alone.
In the United Kingdom, however, home of this breed, in 2007, Belted Galloway was eliminated from the “Rare Breeds Survival Trust” list, especially after having recovered it from the foot-and-mouth crisis of the early 2000s, having exceeded the 1500 registered breeding females .

Morphology –
Belted Galloway is a breed characterized by a black coat with a white band; the hair tends to be long especially in some areas (head and neck). When the heat comes, they lose their mantle. The breed is acorna.
The Belted Galloway has not only black and white specimens, there are also brown and white specimens. The matted coat and the face of these animals make them look like “bears”.
They are animals of reduced stature and very muscular. The bulls weigh from 770 to 1,040 kg, with an average of about 820 kg. The cows weigh from 450 to 680 kg, with an average of about 570 kg. Calves generally weigh about 32 kg at birth. Galloways cows are generally quiet in temperament, maintain a maternal instinct and protect calves against perceived threats.

Production aptitude –
The Belted Galloway, although dual-purpose, is a predominantly meat breed, highly valued for its tender meats and excellent slaughtering yields. The meat has a fine marbling and is rich in aroma, thanks to the herbs on which the animals feed.
These are animals that live long, fertile and with a strong maternal instinct. They are up to 15 years old. To stay warm in the winter months, they have a double coat of curly hair, instead of the layer of fat on the back typical of most other breeds.
They live well in the pasture and with the food available in winter and have a high efficiency of transformation of the pastures of the rough areas of the hill into meat of the highest quality. This breed has adapted to live in the district of Galloway, an impervious and hilly coastal region, thanks also to the rough outer coat that helps not to hold back the rain, and the soft undercoat that provides insulation and impermeability, allowing the breed to spend the winter outdoors.