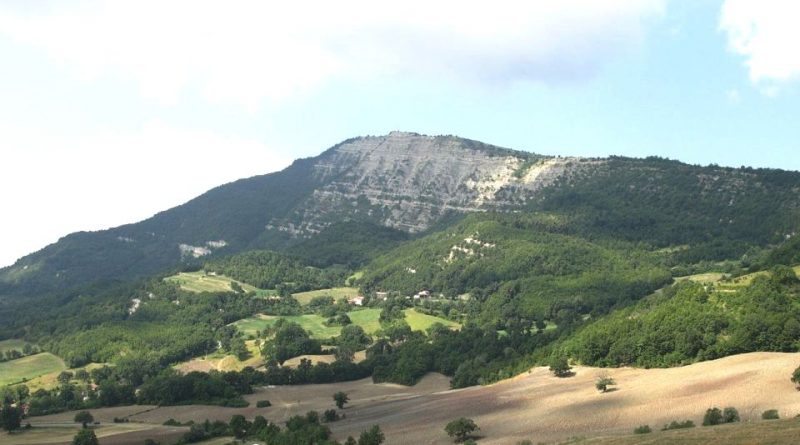 The National Park of the Casentinesi Forests, Monte Falterona and Campigna is an Italian protected area, established in 1993 and identified with the WDPA codes 64511 and EUAP 0016.This Park is located in the Tuscan-Romagnolo Apennines and is located along the border of the regions Emilia-Romagna and Tuscany, straddling the provinces of Forlì-Cesena, Arezzo and Florence. On 7 July 2017 the UNESCO Commission included the Sasso Fratino nature reserve and the old beech woods included in the park perimeter, in the World Heritage ‘Humanity within the serial site Primeval Beech Forests of the Carpathians and Other Regions of Europe. The National Park of the Casentinesi Forests, Monte Falterona and Campigna is a large protected area in the Tuscan-Romagnolo Apennines, including woods and forests among the most extended and best preserved in Italy, guardian of a high floristic heritage and a fauna of great interest that notes the wolf and the golden eagle among the gra n predators and different species of ungulates. The forests and the numerous natural environments frame the signs of a millennial presence of man: villages, mule tracks and above all two sanctuaries of absolute charm such as Camaldoli and La Verna. For the variety of its environments, the territory is divided into four zones, classified according to the protection regime to which they are subjected:

– “integral reserve zone A”: which includes areas of exceptional naturalistic value, in which anthropization is absent or of little importance and in which the natural environment is preserved in its entirety; they are designed to safeguard and maintain the biological and environmental balance in place, to prevent and eliminate any endogenous and exogenous disturbance factors. With an area of ​​approximately 924 hectares, this area includes the Integral Natural Reserves of Sassofratino, Pietra and Monte Falco – “Zone B”: this is the area in which the activities permitted are aimed at improving the complexity of the ecosystems, maintaining of natural and cultural balances, exaltation and conservation of the elements of strong landscape, historical, monumental characterization, even if not coherent with the characteristics of naturalness peculiar to the area itself. The naturalness is maintained through the mere protection, the active intervention of the Body and the maintenance of the only educational, educational, popular, recreational and agro-silvo-pastoral traditional uses, compatible with the preservation of the characteristics of maximum naturalness. It consists largely of the Regional State Forests, the State Biogenetic Nature Reserves of Camaldoli, Scodella, Campigna and Badia Prataglia, and the Franciscan Sanctuary of La Verna; – “Zona C”: this area is characterized by the presence of natural resources, landscape and environmental deserving protection and enhancement. It includes areas of naturalistic interest, characterized by the fact that human activity has conformed the appearance of the places and the environment bringing it to the current state deserving protection, which must be protected by the landscape through the maintenance of balance between the system settlement and the natural one – “Zone D”: includes all urban centers and their planned expansions, as well as areas for traditional production, small centers of historical value and of tourist value. The National Park of the Casentinesi Forests, Monte Falterona and Campigna it is developed in three Provinces and several Municipalities: – Province of Forlì-Cesena (18.200 ha) with the Municipalities of Bagno di Romagna, Portico and San Benedetto, Premilcuore, Santa Sofia, Tredozio – Province of Arezzo (14.100 ha ) with the Municipalities of Bibbiena, Chiusi della Verna, Pratovecchio Stia, Poppi, – Province of Florence (3.900 ha) with the Municipalities of Londa, San Godenzo.Ma the big rich of the National Park of the Casentinesi Forests, Monte Falterona and Campigna, besides the beautiful and well-preserved landscape, is represented by the flora and fauna of unquestionable ecological value. 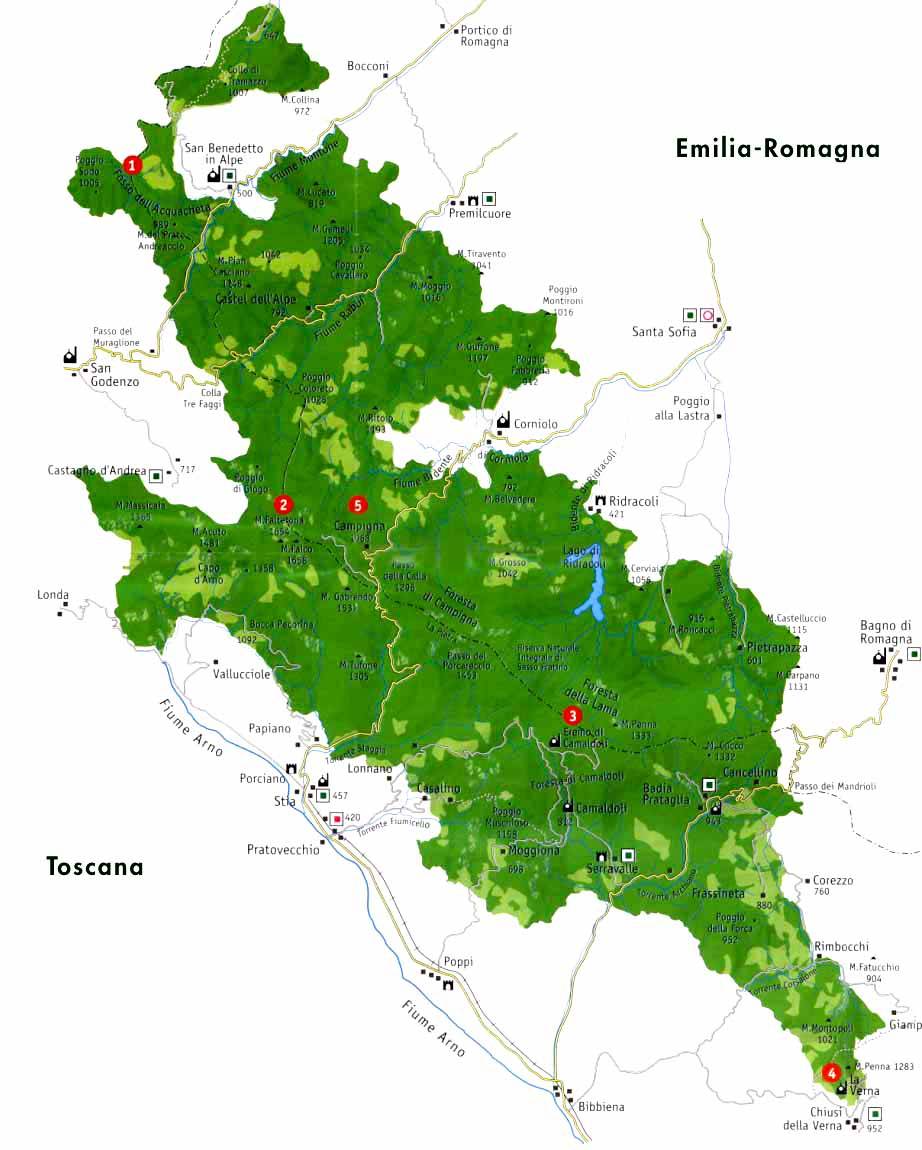 The flora of the Park:
– within the Park there are 37 species and subspecies of Felci and Licopodi (more than one third of the Italian entities) and 44 species of Orchids (66% of those present in Emilia-Romagna and 58% of Tuscany). 845 fungal species present, some of which are first and only in Italy, and even new to the scientific world, including Botryobasidium sassofratinoense, a new species never described before, found within the Sasso Fratino Integral Reserve. Among the new discoveries we also mention the recent discovery of Allium victorialis, the first and only station in the Apennine chain. The Park also includes the Sasso Fratino Nature Reserve, which includes forest tracts that have been preserved in the condition closest to the maximum “naturalness”. The different types of vegetation, as a whole, can be summarized as follows: a) The beech and fir woods – The beech woods (Fagus sylvatica) make up the most characteristic and representative vegetation of the mountain horizon throughout the Apennines. In the altitudinal range between about 900-1000 m and the highest altitudes, the beech tends to form populations in which it is clearly dominant. Sometimes the beech-woods have been replaced by spruce fir (Abies alba), historically favored by man for silvicultural purposes. In the best-preserved areas we find numerous other broad-leaved trees, such as large ash (Fraxinus excelsior), maples (Acer platanoides, Acer pseudoplatanus, Acer opalus s.l.), wild lime (Tilia platyphyllos), mountain elm (Ulmus glabra). This mountain vegetation, rich in tree species, is very rare in the Apennines and its relict presence is of great naturalistic interest. It is in the low-altitude beech woods and in the mixed mesophilous woods of contact that you can find individuals of badger (Taxus baccata) and holly (Ilex aquifolium), rare and protected elements in Emilia-Romagna.b) Monte Falterona – consisting of oak woods and woods mixed deciduous broad-leaved. These occupy the hilly and low-mountain belt, up to altitudes of about 900-1000 m. The main arboreal constituents are deciduous oaks (Quercus cerris and Quercus pubescens, rarely Quercus petraea), chestnut (Castanea sativa), black and white hornbeam (Carpinus betulus and Ostrya carpinifolia), opal maple (Acer opalus s.l.). Generally, the arboreal plan is less homogeneous than that of beech-woods, and the shrub and herbaceous strata are richer in species. C) I Castagneti. Unfortunately, with the spread of chestnut diseases and the depopulation of mountain areas, many of these forests have been abandoned and converted into coppices or forests. Nevertheless, chestnut groves are still quite common both in the Romagna and in the Tuscan side of the Park. D) Shrubs and shrubs. The shrubs present are generally to be considered as secondary stages deriving from the colonization of abandoned grassy clearings, as the modest altitudes do not allow the development of primary subalpine moorlands, with the exception of the top of Monte Falco where we find residual limbs relicts. At the higher altitudes we find blueberry (Vaccinium myrtillus) and brugo (Calluna vulgaris), or bushes with broom of the charcoal burners (Cytisus scoparius) and bracken fern (Pteridium aquilinum). At lower altitudes we find blackthorn (Prunus spinosa), brambles (Rubus sp. Pl.), Hawthorn (Crataegus monogyna), wild rose (Rosa canina sl), common juniper (Juniperus communis), wild pear (Pyrus pyraster), and sanguinello ( Cornus sanguinea) .e) Meadows and pastures. There are several grazing areas, also of secondary origin as they are derived from the destruction of forest formations that took place in ancient times. The mountain meadows, often referred to also by the generic name of “nardeti”, are mainly constituted by Nardus stricta and Festuca sp. pl. On the other hand, the meadows and pastures of the submontane areas are more affected by the type of anthropic disturbance implemented and are mainly constituted by Bromus erectus and Brachypodium rupestre. F) Grassy pratelli on rocky ledges. At higher altitudes, located on the cliffs exposed to the north at the summit of M. Falco, we find sub-alpine vegetation residues of colder periods, in which these species had much greater diffusion. Among these we mention the narcissus-flowered Anemone (Anemone narcissiflora), the Saxifraga with opposite leaves (Saxifraga oppositifolia), the Gentian verna (Gentiana verna) and the Viola di Eugenia (Viola eugeniae), symbol of the Italian flora and characteristic of the massifs Apennines from central Italy, which reaches its northern limit of distribution here.

The Park Fauna:
The fauna of the Park is characterized by the most important wolf population of the northern Apennines, estimated at about fifty specimens, divided into 9 hypothetical herds distributed throughout the Park territory. One of the factors that has favored the wolf on the territory of the species, along with the vast forest cover, is the consistent presence of five species of ungulates: wild boar, roe deer, fallow deer, and mouflon. Between micro and meso mammals we can count 21 species present with certainty on the territory of the Biogenetic Reserves and therefore in the National Park itself, among which the fox, the hare, the European mole and the blind mole, the red squirrel, the porcupine and the hedgehog are very common. Among the mustelids, the presence of yew, weasel, marten and skunk is confirmed, while Martora needs to be confirmed. Regarding the Bats within the Park today we find 15 species that represent half of the national fauna. Among the birds, there are 139 nesting or nesting species present, of which 100 are present regularly throughout the year and 77 nesting. Among these, some present a purely Central European distribution such as the Alpine Rampichino and the Ciuffolotto, while others are Mediterranean like the Occhiocotto and the Sterpazzolina. Among the species of open environments we mention as nesting the Calandro, the small Averla, Tottavilla, the Strillozzo, the Allodola, the black Zigolo, the Fanello and the Prispolone, while as a species of step, the Culbianco, the Stiaccino and the Codirossone , species that were present as nesting in some highland meadows until a few years ago. Among the Piciformes we include 6 species, namely Torcicollo, Lesser Spotted Woodpecker, Great Spotted Woodpecker, Green Woodpecker and Black Woodpecker. Among the diurnal raptors we find a total of 22 species for which we have information, recent or past, for the Park area. Among these are seven certainly nesting species, that is: the Peckish Hawk, the Astore, the Sparrowhawk, the Buzzard, the Golden Eagle, the Kestrel and the Peregrine Falcon. It is not certain the breeding of the Lodolaio, sporadic the presence of the Biancone and the minor Albanella. Among the nocturnal birds of prey, in addition to Barbagianni, Civetta, Allocco and Owl, we find the important presence of the eagle owl, a species that is experiencing a dramatic decline in the number of people in the region. As regards amphibians and reptiles, there are 23 species of Amphibians and Reptiles, or one third of Italian amphibians and one fifth of Italian reptiles. Among the amphibians there are the salamed Salamandra, the spectacled Salamandrina, the Italian Geotritone, the Alpine or Mountain Triton, the common or dotted Triton, the Italian crested newt; among the amphibious anuri we mention the important presence of the yellow-bellied Ululone, Apennine endemism. Among the sultan reptiles disseminated in the Park the Biscia from the collar, the Colubro di esculapio, the Biacco, the smooth Colubro, the Colubro di curls, the Biscia tassellata and the common Viper. Among the invertebrates there are 230 species of Carabidae present in the area of ​​the Park (17% are people of Italian entities and 43% of those of Emilia-Romagna and Tuscany), 118 of Cerambycidae (over 55% of Italian entities and 78% of those of Emilia-Romagna), 845 of Butterflies and Moths (a rather large figure compared to those of the nearby Apennines).