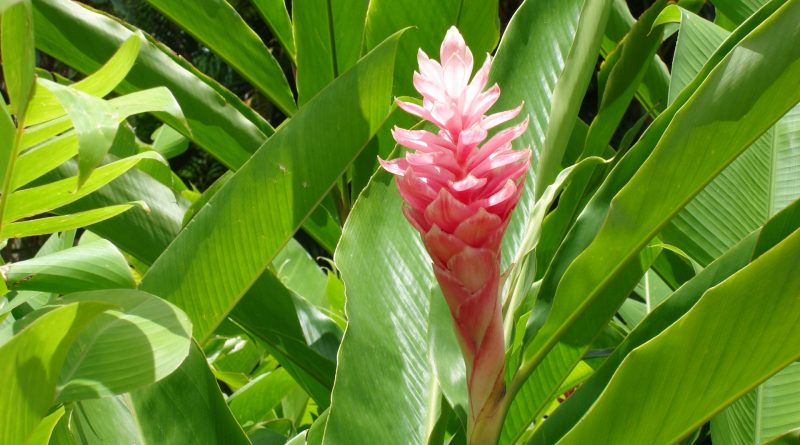 Ginger (Zingiber officinale Roscoe, 1807) is a herbaceous plant of the Zingiberaceae (the same Cardamom family) originating in the Far East. It is a plant cultivated throughout the tropical and subtropical fascia, is provided with fleshy and densely branched rhizome, from which there are both long sterile barrels and cables, formed by lanceolate leaflets, and short breeding fertile, carrying yellow-greenish flowers with purple spots . The fruit is a capsule divided into three logs

Etymology –
The term derives from the extinct Middle East language that used singular expression. When the plant came with the shadows of the Asian countryside of Alexander the Great, first in Greece and then throughout the Mediterranean, the various languages ​​changed the original name according to their own canons, which explains the notable difference between the various denominations of today.

Geographic Distribution and Habitat –
Ginger is a plant native to India. It is very cultivated in the tropical range, in Southeast Asia and especially in India, China and Africa. For its biological characteristics, vegeta well in humid, well-drained and fertile soils. 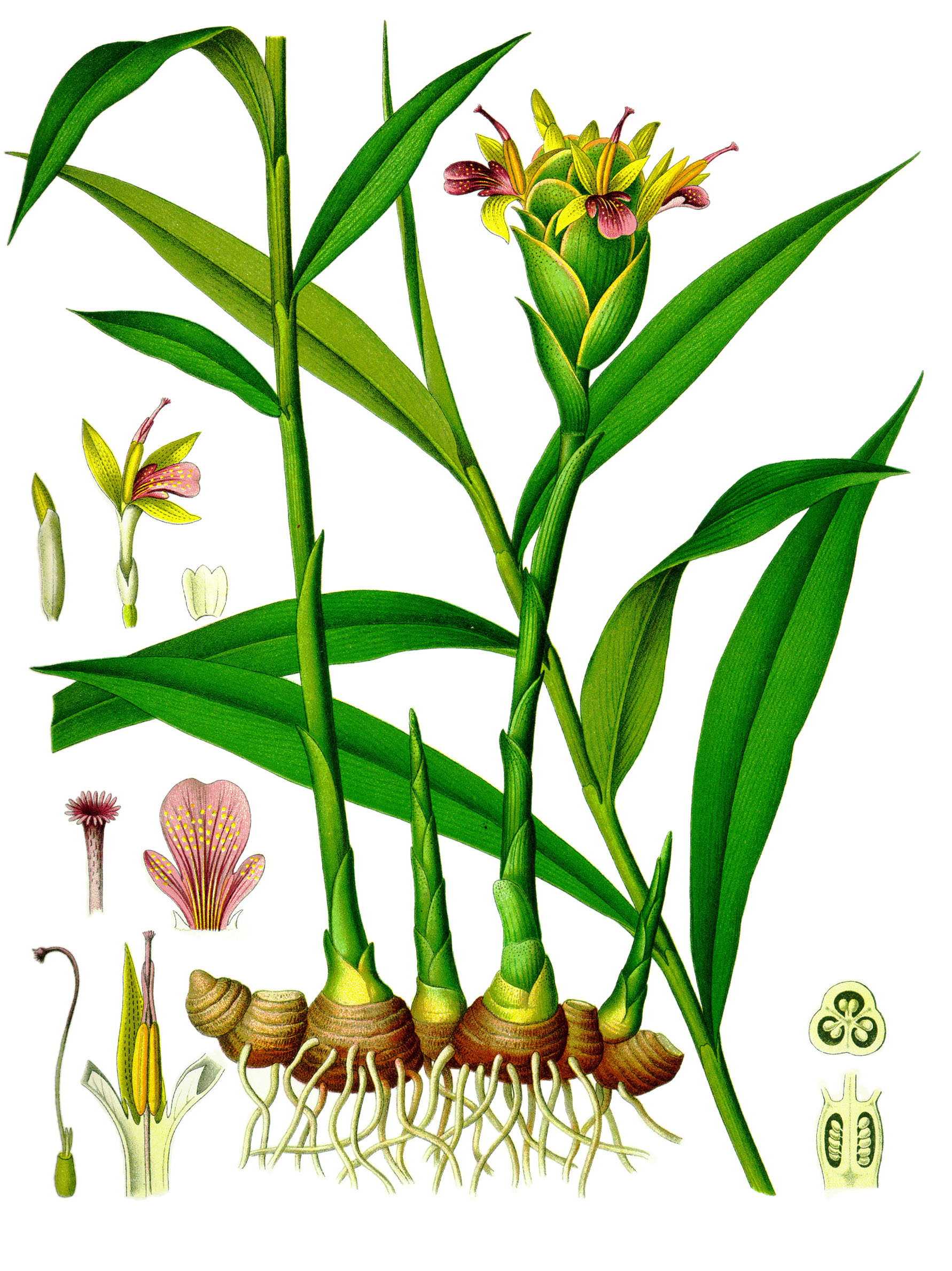 Description –
Ginger (Zingiber officinale) is a herbaceous perennial herb planted with tuberous rhizomes from which the stem is part. It is a perennial plant, that is, with gems in the underground, rhizomatic position, from which every year a new plant is born. The roots of ginger, with their irregular and dull form, seem to be jokes of nature. Rice, which is precisely the root of the ginger plant, grows horizontally in the soil and the plant itself looks like a robust grass. Its “pseudo-stalks” that can reach a height of one meter are actually so thick and narrow leaves that seem to stare. Here and there, elongated leaves protrude from pseudo-stems. They end with a yellow-whitish inflorescence made of orchid-like individual flowers.

Cultivation –
The Zingiber officinale is a herbaceous plant native to the Far East, but can adapt to our climate. Ginger crops in Italy have become popular for the properties of fleshy rhizome of this officinal plant. Ginger crops are distributed mainly in India, China, Nepal, Indonesia and Nigeria. Only in 2013 global ginger production reached and exceeded 2.1 million tonnes. Different ginger varieties are common in the countries of origin. For the cultivation of ginger in Italy we have to rely on the cultivars that best fit our climate.
Those who want to cultivate ginger in the garden would be better off to organize themselves with sacks or vases: ginger has precise climatic requirements and are not always compatible with the climate, especially for those who live in the center-north of Italy. In the south the thing changes considerably so we recommend cultivating only in these areas.
The ginger plant does not tolerate temperatures well below 10-15 ° C, even when it stays at lower temperatures, does not develop a fleshy and good quality rhizome.
The planting period must be between winter and early spring.
To get started, even in craftsmanship, you buy the classic ginger rhizome that you use in the kitchen or natural remedies, from here you can get the first sprouts. The only condition is to buy rhizome in a shop that sells only organic products because the ginger roots you find at the supermarket are often treated with substances that prevent germination.
Once you have obtained a biological ginger root, keep it in a ceramic container, at home, at room temperature. Within a few days, a first sprout should begin to grow. When the germination is complete, with a sterile and well sharp knife, cut the rhizome about 3 cm away from the sprout. From a single root you can get as many ginger plants as there are buds!
Ginger can also be grown in pots. Just make up the containers at least 40 cm wide and at least 30 cm deep. In each jar, place two pieces of roots at a distance of about 15-20 cm from each other.
The vessel is filled to 50 percent with a mature compost and the other half with a mixture of clay-sandy soil (medium dough). If you are not sure about the drainage qualities offered by the ground, put a couple of cm of expanded clay on the bottom of the jar: ginger does not bear water stagnation.
Gingerbread buds are buried at about 5 cm deep with the green tip pointing upwards. Irrigate the plant a few hours after settling.
Ginger dishes should be kept in a slightly shaded place where the sun gets filtered in the hottest hours of the day. The ginger plant will begin to develop when the soil temperature stabilizes steadily at 22-25 ° C.
Ginger is irrigated daily throughout the vegetative period (as long as you notice green leaves on the plant). In autumn, when the leaves begin to fall, it will be possible to collect the rhizome. Harvested rhizomes can be eaten fresh or after drying.
On average, the sprouting of the sprouts at the first harvest will go about eight or nine months, depending on the seasonal climate.
Although the ginger is a beautiful blossom, the flower will soon be eliminated, as it will extract nutrients to the rhizome which will be less developed and less intense.

Methods of Preparation –
Ginger is a root of a thousand beneficial properties: from digestion to slimming effects, from good circulation to aid against nausea. The thing we immediately recognize about this root is its fresh and biting flavor, which in the kitchen is very useful for re-balancing or giving a shade to the dishes. But let’s see how you can cook and use ginger in the kitchen.
First of all, let’s start by saying that most of the time you will want to grind it: as root you will be very good, and it will be much more practical for you to use it. And for conservation? Fresh ginger will last very long in the fridge: from 2 to 3 weeks if you repair it from moisture.
Here we give you some idea, more or less conventional, about how to use fresh ginger in the kitchen.
Ginger in the pasta: it is certainly not an Italian flavor of ginger, but with pasta it is a pity. Take for example a recipe that combines classical garlic lime and chili peppers with a nice dose of ginger. To create a ginger cream just boil the cream with chopped ginger and the game is done. But ginger is also perfect in some recipes that match the root to the taste of sea urchins.
The fresh flavor of ginger, combined with lime, can give a summer twist to all dishes, especially delicate fish carpas, which need some acidity to fully conquer the palate. Ginger can be used in cod carpaccio.
Another recipe is one that uses pumpkin and ginger. An autumn approach to be taken into account right now. Pumpkin and ginger together are one of the most interesting pairs of the kitchen, which is a risotto or velvet.
Another recipe is to use fresh ginger in the kitchen to make a sauce. Simply grate ginger finely, add some lemon and soy sauce and mix by adding soy cream (for a lighter effect) or vegetable milk. If you want, you can also use the eggless mayonnaise directly for a light version of the sauce, to be used on salads, fish, rolls or meat.
Ginger can be used to prepare candies, surely a healthier alternative to chocolates or candies. Beware however of what you buy at the supermarket: it might be full of added sugars. To be sure it’s healthy and good, it’s okay to do it at home.
Among the most famous recipes with ginger are definitely Christmas biscuits. Fresh ginger in general can be used in many cakes and desserts.
Always with the ginger you can prepare the centrifuges, including that with carrots, apples and ginger, but the root is great for all recipes, including smoothies.
Still, ginger in cocktails; In summer (or winter) cocktails is just perfect.
Finally, among the countless uses we recall ginger tea. It’s a tadpole especially after exaggerating a little at the table: a ginger herb helps digestion and is especially enjoyable to taste hot. Prepare it is easy: just boil 3 pieces of fresh ginger in a pan and let it rest and cool a little.

Caution: Pharmaceutical applications and surgical uses are indicated for information purposes only; they do not represent any prescription of a medical type; Therefore, no responsibility for their use for any curative, aesthetic or food use is considered.