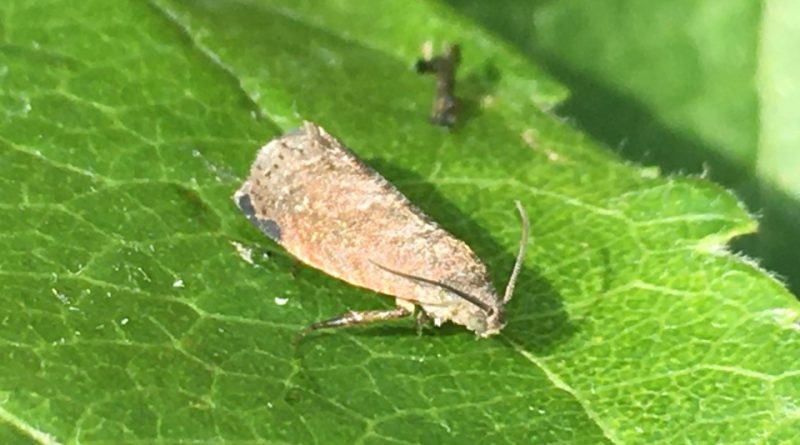 The oriental fruit moth or peach moth (Cydia molesta, Busck, 1916) is an insect belonging to the Tortricidae family.

Geographic Distribution and Habitat –
The oriental fruit moth is a moth native to China but has been introduced to Japan and North America and is now also found in Western Europe, Asia and South America and Hawaii, Morocco, Mauritius, South Africa, Australia, and New Zealand.
This insect appeared in Italy at the beginning of the twenties (between 1920 and 1921) causing the attack and subsequent devastation especially of stone fruit. Its habitat corresponds to the presence of plants such as: peach, other stone fruit, pome fruit and ornamental rosaceae.

Morphology –
Cydia molesta, in the adult state, is a medium-small size butterfly, with gray-brownish wings with whitish streaks and whitish marbling; the edges of the are finely fringed.
The larvae, which are pink or ocher in color, reach a length of about 10-5mm.

Attitude and Life Cycle –
The Cydia molesta overwinters in the mature larva stage and we can find it in the fields, protected by small pods in the crevices of the rind or at the base of the plants, in the ground; it can also overwinter in the warehouses, in the ravines of the collection and conservation structures.
At the beginning of spring or at the end of winter, depending on the climatic conditions, adults flicker; the flickering generally takes place from March to May, with a peak of presences in the second fortnight of April.
In this period the females lay oviposition on the young shoots or on the leaflets thus originating the 1st larval generation which is active, on the shoots, from the end of April to the end of May.
These larvae, having become adults, make their second flight, around the month of June, giving rise, after deposition, to the second larval generation, active mainly on fruits from the second half of June to the second decade of July.
These larvae originate the adults of the 3rd flight which generally flicker from the second decade of July to the first decade of August. Thus begins the third larval generation, always active on the fruits, which appears from the month of July to the beginning of August.
During the month of August the adults of the 4th flight flicker; these originate the fourth larval generation, which is active in August.
This latest generation of larvae, depending on the area and climatic conditions, can overwinter or give rise to a fifth generation, between August and September, which overlaps the fourth generation.
In this way, the Cydia molesta completes 4-5 generations a year, with overlaps at the end of the summer and with practically continuous flights.
The larvae carry out a trophic activity and therefore the related damage on the shoots and fruits. In particular, they are the first generation larvae which, by digging longitudinal tunnels in the medullary areas, cause wilting and loss of shoots. The damage on the fruits, even more serious, involves the leakage of a lump of rubber and often, the affected fruits are subject to drop, also due to the soft decay also due to the presence of fungal agents.

Ecological Role –
The larvae of Cydia molesta feed on peaches, apples, quinces, pears, plums, cherries, apricots and nectarines but also on other stone fruit, pome fruit and ornamental rosaceae.
At the start of the season, the larvae burrow into the tender twigs causing the twig to die. In the presence of high population densities, trees can take on a bushy appearance. Subsequent generations can feed on terminal growth and developing peaches. The larvae that attack the fruit often enter near or through the stem and penetrate directly into the fruit. Larger peaches may not show external damage. Fruit damage can cause an increase in the amount of brown rot.
The damages caused differ both for the period and for the part of the plant attacked.
The shoots are generally attacked by the larvae of the first generation which dig, inside them, longitudinal galleries in the medullary area; the attack causes a wilting with consequent loss of the shoot.
A single larva can attack several shoots, accentuating the already serious damage.
The attack on the shoots can be repeated even in summer and is particularly harmful:
– for young plants in breeding, because causing the awakening of lateral buds due to a lack of apical dominance, it determines the loss of the training system;
– for recently grafted plants, for the loss of the “grafted eyes” and therefore of the top of interest.
On the fruit, on the other hand, there is very serious damage, also due to the commercial aspect of the same.
The damage is generally caused by the generations following the first where the larvae dig tunnels in the pulp:
– up to the central area to reach the core, in the Drupaceae;
– generally superficial in the Pomacee; only in some cases, unlike the Carpocapsa which always penetrates the pulp, the galleries deepen up to the seeds.
However, both in the Pome fruit and in the Drupaceae, the entry of the larva takes place either in a point of contact of the fruit with another organ of the plant (branch, leaf, other fruit), or in the area of ​​insertion of the peduncle.
As a result of the trophic activity of the larvae, the fruits of the affected stone fruit emit a lump of rubber.
Infested fruits are often subject to droplets, especially if the larva enters the peduncular area; however the fruits undergo soft decay both for the direct activity of the larvae and for the subsequent attack of fungal agents of the rot of the fruits that enter from the holes of the larvae.
In order to combat the populations, and the relative damage of this moth, it is necessary to know the real density, distribution and period of presence of the insect.
For this reason it is necessary to monitor the population.
Monitoring is done with sexual traps; the execution technique includes:
– the installation of traps in the orchard in early April;
– trap density: 2-3 traps per hectare, for the first hectare, plus one for each hectare following the first; in the case of farms that are not very large and with uniform plots, 2-3 traps are sufficient for the whole farm.
After the data has been collected, the intervention threshold can be established: this varies from zone to zone and on average is 10 adults captured per trap per week (starting from the 2nd flight).
Sampling is performed on the shoots; on young plants in breeding, action is taken when the affected shoots are 10% of the organs sampled, as is the case for Anarsia.
In other cases, the determination of the threshold, both on the% of shoots affected and on the% of fruit affected, is evaluated each time.
Any interventions must be performed as follows:
– 7-8 days after the threshold for the 2nd generation is exceeded;
– 4-6 days after the threshold is exceeded for subsequent generations.
However, in the presence of continued infestations of this insect, the conditions that have determined these infestations must be evaluated (which should be done in replanting) such as: planting density, presence of more susceptible species, method of fertilization of orchards, presence of hedges and other crops that interrupt the homogeneity of the orchards and more, it is a question, in a nutshell, of creating agro-ecological conditions that discourage and reduce the proliferation of these infestations and their relative damage.
Under certain operating conditions, Bacillus thuringiensis ssp. kurstaki.
Finally, chitin inhibitor development regulators can be used at the beginning of flights.
Considering that the greatest damage from Cidia is produced by the summer generations on the fruits and that the first generation, on the shoots, can be controlled with cumulative interventions together with Anarsia, a high intervention threshold can be used for this first generation ( even over 20 catches per trap per week), while there is a tendency, for summer generations, to keep the threshold of 10 catches low.
The fight against Cydia molesta must therefore be carried out in the presence of Agronomists who are particularly specialized in the field, avoiding the immediate use of insecticides which, as a rule, compromise the delicate biocoenosis of other insects such as pollinators and deteriorate the delicate ecological balance of other organisms. , such as especially the birds, which feed on this insect.
In some operating conditions, where the characteristics of the orchard allow it, it is possible to apply the method of sexual confusion, placing the dispenser dispensers of the pheromone at the beginning of the flights (or just before) of the first generation, possibly combining the disorientation intervention also against Anarsia.
Until now, unfortunately, criteria of guided and integrated struggle have been carried out with chemical interventions based on Azinfos-methyl, Chlorpyrifos-ethyl, Carbaril, etc., when the threshold, which varies from 7-8 days, is exceeded for the second generation and 4-6 days, for subsequent generations.
If, at first, these interventions seem to have apparent benefits, in the long run they compromise the delicate equilibrium and the biocoenosis, already aggravating the attacks of this insect in the short term.