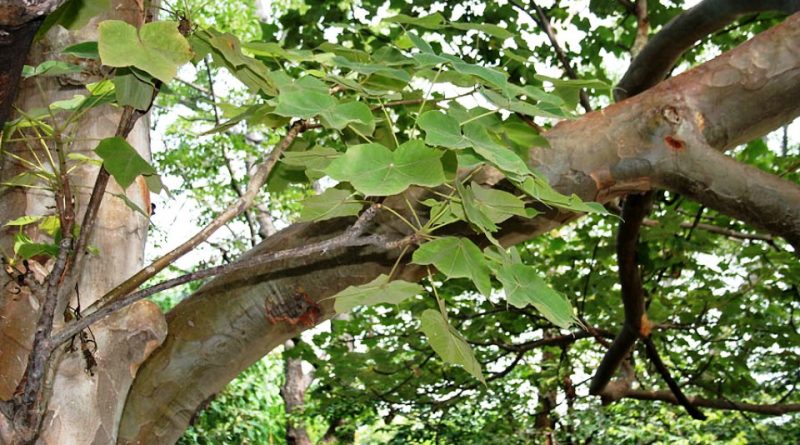 Etymology –
The term Sterculia comes from Sterculius / Sterquilinus, Roman god of excrements (from stercŭs dung, manure): due to the fetid odor emanating from some species of this genus.
The specific epithet urens veien da uro burn: due to the presence of stinging hairs.

Geographic Distribution and Habitat –
Sterculia urens is a plant native to the Indian subcontinent, Indochina and Malaysia but also introduced in Burma and present in East Asia and Sri Lanka.
Its natural habitat is that of the arid rocky hills in central and northern India, at altitudes between 300 and 750 meters but also present in dry and tropical deciduous forests, often associated with Boswellia serrata, on hills, exposed ridges, rocky crevices, eroded slopes and similar habitats. 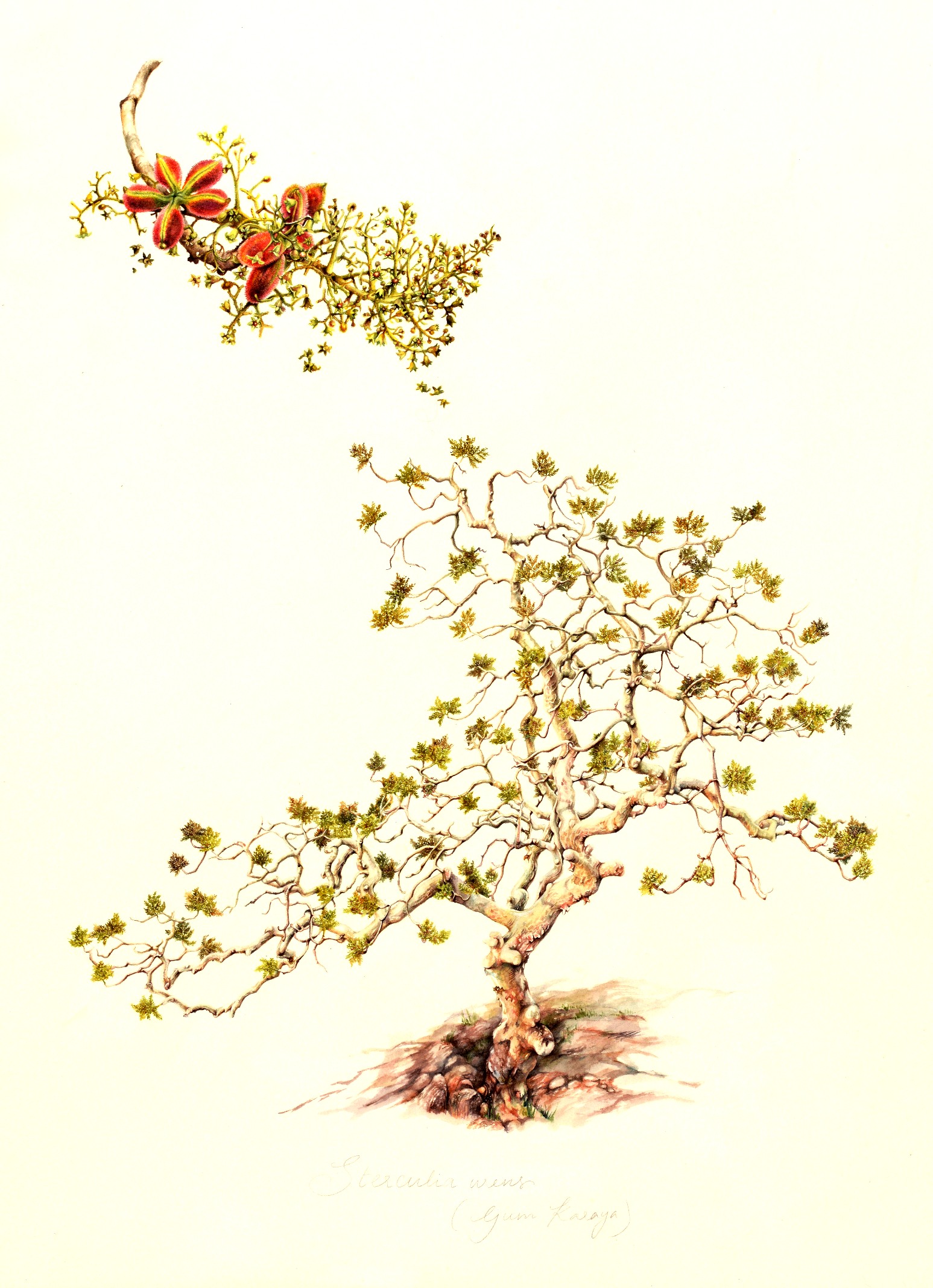 Description –
Sterculia urens is a medium sized deciduous tree with horizontally spreading branches that grow to a maximum height of around 15m.
The bark is smooth, fibrous and thick, greenish-gray in color, with the surface layer that comes off in large flakes.
The twigs are hairy at first.
The leaves are alternate, simple, hairy underneath and have three to five webbed lobes. They are clustered at the tips of the twigs.
The flowers are yellowish-green and carried in panicles at the axil of the leaves. They are polygamous (with male, female and bisexual flowers on the same tree) and are covered with sticky or glandular short hairs. The chalice has five lobes and there are no petals. Male flowers have a columnar head of ten stamens while bisexual flowers have a ring of anthers around the five free and radiant carpels that grow to 75mm when fully developed. They are pink in color and densely covered with red hair and stinging hair.
The plant is mainly pollinated by Apis indica while the wind has no role in pollination.
The fruits open when ripe, are brown or black in color and carry up to six square seeds inside.

Cultivation –
Sterculia urens is a deciduous tree that is sometimes grown in India and Sri Lanka for rubber, which is used medicinally.
It is a plant that grows at low altitudes in the arid to humid tropics, where it is usually found at altitudes between 300 and 750 meters and prefers areas with annual daytime temperatures between 30 and 42 ° C, although it can tolerate between 7 and 47 ° C, but cannot stand temperatures below -2 ° C.
It prefers an average annual rainfall of between 750 and 1,200 mm, but tolerates 200 – 2,000 mm, usually growing in areas with a distinct dry season.
To grow it requires a sunny location, although the seedlings tolerate shade. From a pedological point of view, it prefers light and well-drained soils and is very tolerant to poor and rocky soils.
It also prefers a pH between 6 and 7, but tolerates between 5.5 and 7.8.
Trees can be tapped about 5 times during their life to make rubber.
The trees are generally grown in a coppice system with a rotation of 30 – 40 years.
Propagation occurs by seed. Germination takes 10 – 15 days and yields nearly 100% of seedlings reaching 15 – 20 cm in height in three months.
Physical dormancy caused by the hard seed coat of mature seeds of many species of this genus can be overcome by scarifying the seed. It works by cutting or abrading part of the mantle of the seed to allow water to enter, although it is necessary to be very careful not to damage the embryo.
The aril surrounding the seed should also be removed; this is easier when it has been softened by soaking in water.
The seeds germinate optimally at temperatures between 20 – 30 ° C. They can be sown in nursery seedlings or in containers. A germination rate of approximately 95% can be expected, which occurs within approximately 2 weeks if the seed has been properly treated.

Customs and Traditions –
Sterculia urens is commonly known, among other names, as: bhutyā (भुत्या) in Marathi (meaning “ghost tree”), kulu, Indian tragacanth, karaya gum, katira, sterculia gum or kateera gum.
The tree exudes natural rubber, known as karaya gum, when the bark is damaged. This precious substance is traditionally exploited by cutting or detaching the bark, or by making deep cuts at the base of the trunk with an ax. Such crude extraction methods often kill the tree, but application of the plant growth regulator etephon has been found to stimulate gum production and, when used in carefully controlled quantities, increase gum yield and improve wound healing.
Karaya gum swells when it absorbs water and is used as a laxative because it adds volume to the contents of the intestine, stimulating the intestine to evacuate.
Karaya gum is believed to have aphrodisiac properties, but there is not enough evidence to support this.
Other uses of gum are as a thickener in cosmetics and drugs and as an adhesive for dental prostheses. It is also added as a binder, emulsifier and stabilizer in the preparation of beverages and foods.
For food use, the seeds are used that are roasted and eaten. The seeds are sometimes roasted and used as a coffee substitute.
In addition, the gum obtained from the trunk is eaten in curry.
However, it is a food that, especially in the past, was more commonly used as a food during times of famine.
Even the young and tender roots are eaten cooked but also these especially in times of famine.
In medicinal use, as well as as a laxative, gum is used to treat throat infections.
The main constituent of the resin is a flobatannin, containing 3 OH phenolic groups.
Other uses include agroforestry ones. It is a useful plant for the reclamation and reforestation of bare and rocky soils.
The fibers obtained from the bark are used for the manufacture of cordage. The bark can be easily torn from the tree and produces a useful fiber suitable for making textured fabrics and cords.
The sapwood is pale greyish-white in color; clearly demarcated by the red heartwood. The wood is heavy to very heavy, very strong and very hard, but poor in cracking and shape retention.
It is planed and turned until a smooth finish is obtained and it can also be suitable, after seasoning and adopting suitable joining techniques, for windows, furniture and joinery. It is considered suitable for use as poles, beams and tool handles.
Finally, the wood is used as fuel.

Preparation Method –
Sterculia urens is a plant that has many uses, from food to medicinal ones as well as as plants for agroforestry and the use of wood.
Pay attention to the presence of its stinging hairs, also present on the fruits.
The roasted seeds of this plant are consumed for food use and used in various ways.
In times of famine, even the young cooked roots are eaten.
For food use both uses rubber which is however also used in the medicinal and cosmetic fields.