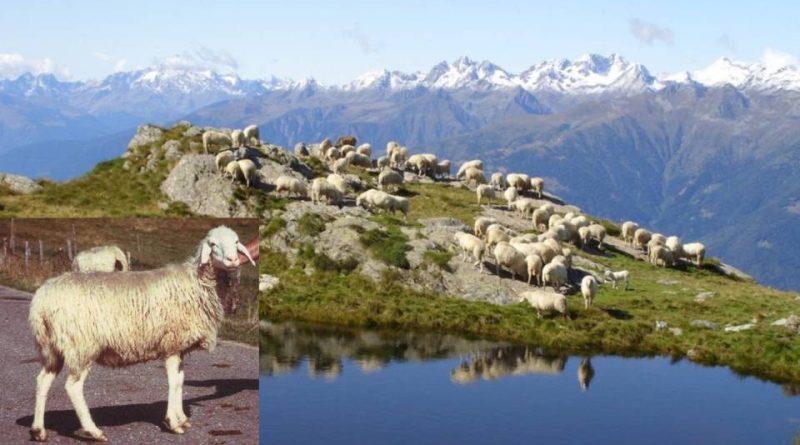 Corteno is an Italian sheep (Ovis aries Linnaeus, 1758), originally from the province of Brescia, with a main aptitude for meat production.

Geographic and Area Distribution –
The Corteno sheep is an indigenous sheep breed widespread in the territory of the municipality of Corteno Golgi (BS) and present in the Val Camonica, in the province of Brescia in Lombardy, in northern Italy.
This sheep takes its name from the municipality of Corteno Golgi, and is also present in the neighboring municipalities of Edolo, Malonno and Paisco Loveno, all of which are part of the Mountain Community of Valle Camonica.

Origins and History –
The origin of the Corteno breed is unknown, but it is probably shared with that of other breeds with hanging ears in the Alps such as the Bergamasca, the Biellese and the Lamon. The numbers were estimated at 4000 head in 1983, then dropped to around 1600 in 1995.
In 2006 the total number was estimated at 1500, of which 131 registered in the herd book. The conservation status of the breed was classified as “critical” by FAO in 2007. In 2013 the registered number for the breed was 295 head.
The Corteno sheep is raised according to traditional methods, with winter housing. This breed performs a complementary function, but perfectly connected to the local culture and tradition. In particular, the use of the meat of lambs and cull sheep stands out, with which the typical local dish (cus) is prepared. The conservation of genetic variability is extremely important for the management of reproduction.
It is one of forty-two autochthonous indigenous sheep breeds with limited distribution for which a herd book is kept by the Associazione Nazionale della Pastorizia, the Italian national association of sheep breeders.
To revive this breed, the Pecora di Corteno association was born, founded in Corteno Golgi at the Municipal Office, which brings together breeders, farmers, hobbyists, sector technicians, restaurateurs and processors, citizens of the Municipality.
The goal is to protect this biodiversity heritage of the Corteno Valley, also through the enhancement of CUZ, a food specialty based on Corteno sheep meat.

Morphology –
The Corteno sheep is characterized by a medium size with an open white fleece and with medium-fine wool and fine and elastic skin.
The head is short, with a slightly sheepskin profile that is not accentuated; the ears are hanging of medium development and is always devoid of horns.
The neck has a short and compact attachment.
The trunk is compact, quite deep with a straight profile; has well developed muscle masses especially in the buttock area and light bone.
The limbs are correct and robust.
It has a height at the withers of about 77 cm in males and 73 cm in females for a weight of about 70 kg for males and 60 kg for females.

Productive attitude –
Corteno is a sheep with little dietary needs, which allow it to exploit poor pastures.
Lambs reach a weight of 40 kg at twelve months. It is a polyestral animal capable of delivering 3 births in two years with a twinship of 50%
It is a breed with a preeminent meat aptitude. Typical production is lamb (generally whole) over six months of age, slaughtered at 40-50 kg of live weight.
Corteno meat is exceptionally fatty. It is traditionally used, as mentioned, to produce Cuz, a local type of preserved meat. Whole mutton carcasses are boiled in a cauldron for five or six hours with salt and a little water; the meat is then placed in clay pots with more salt and sealed with mutton fat.