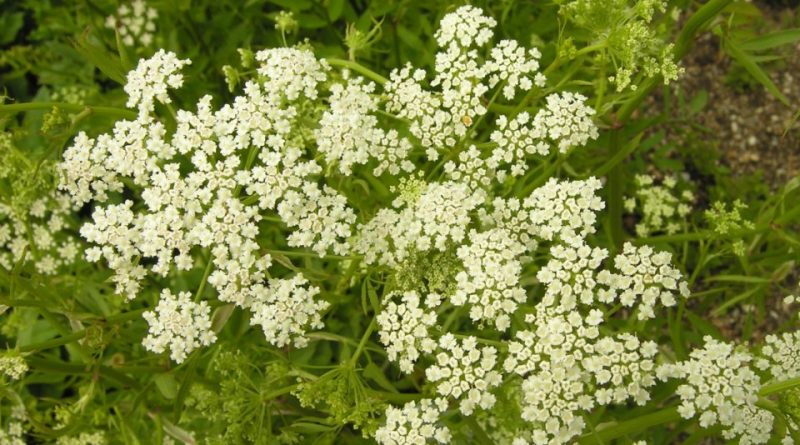 Skirret (Sium sisarum L.) is a herbaceous species belonging to the Apiaceae family.

Etymology –
The term Sium comes from the Greek σίον síon, the name of a genus of perennial plants of humid and swampy places in the northern hemisphere.
The specific epithet sisarum is the plural genitive of sisara heather: of heather, for sharing the habitat.

Geographic Distribution and Habitat –
Skirret is a plant whose place of origin is uncertain but most likely between Eastern Europe and Asia.
Its natural habitat, due to its ancient cultivation, is not known in spontaneous conditions but the plant grows easily in humid places, crop margins, partially submerged ditches, etc. 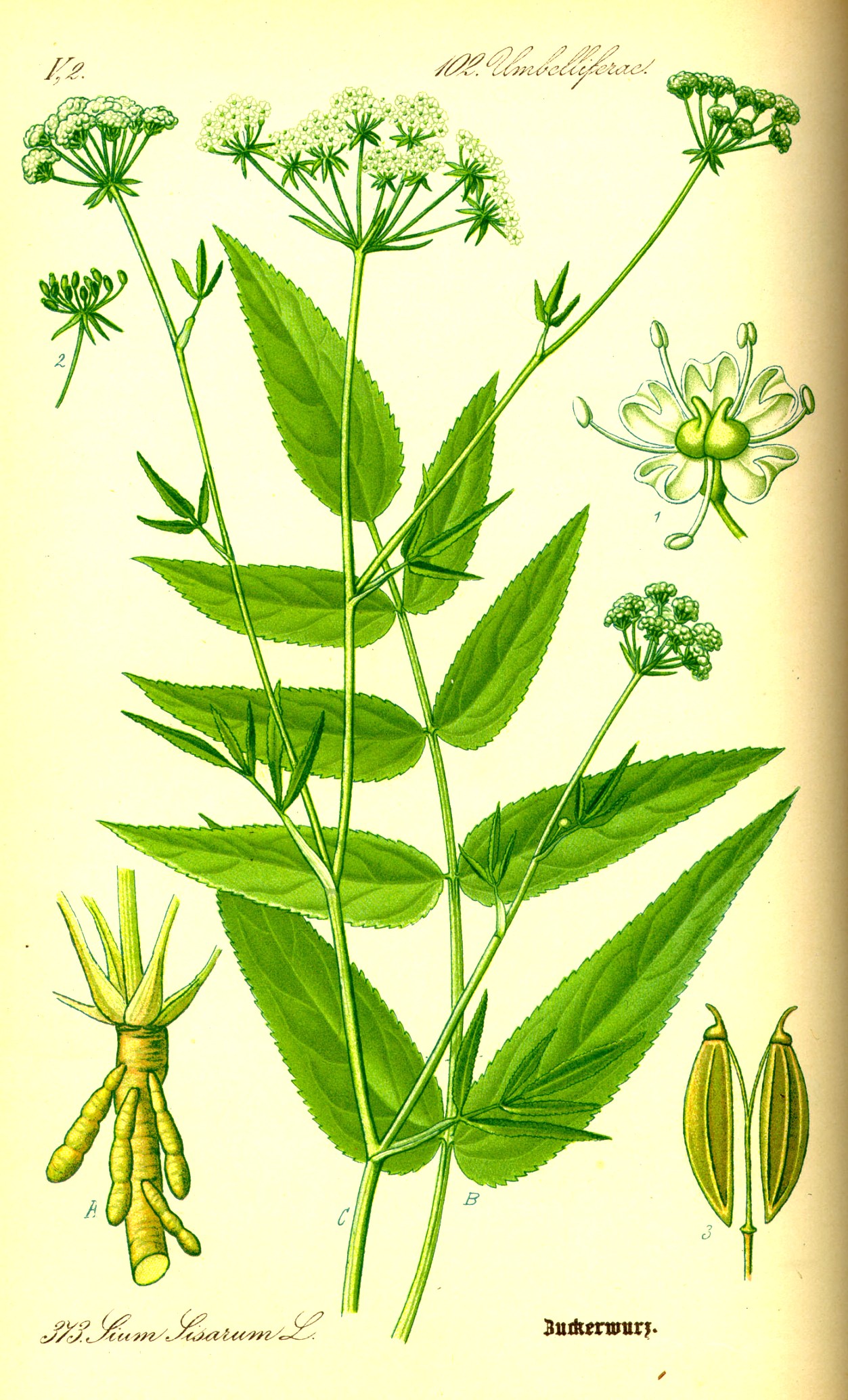 Description –
Sium sisarum is a perennial herbaceous plant that branches off from a cluster of bright white, sweetish, somewhat aromatic roots, each about 15–20 centimeters long.
The plant can reach a height of 1.00 meters and 40 centimeters in width.
The flowers are white, small and grouped in umbels; they are hermaphroditic and pollinated by insects. The plant is self-fertilizing.
The leaves are lanceolate, serrated and pinnate compound, dark green and shiny.
The fruits are achenes and the seeds have a thickness between 0.75 and 1 mm and a length between 2 and 2.5.

Cultivation –
Sium sisarum is a plant known for a long time and collected in the natural or cultivated state, both for food and medicinal use.
It has a tuberous cluster root a couple of centimeters thick with an inedible fibrous core. The meat is white and has a sweet flavor close to that of carrots and parsnips.
It is a hardy plant that grows well in the cold, humid climate of Central Europe.
The plant prefers a light, rich soil that retains moisture and full sun exposure.
For a greater tenderness of the roots, the plant must grow in conditions of soil moisture and moreover it can also grow in partially shaded areas.
Propagation occurs by seed; sowing should be done from late winter to early spring. In colder conditions it can be slow to germinate.
Sowing can be done in seedbeds, with transplanting in spring.
It can also propagate by division, at the beginning of spring, just before the vegetative period. In this case, lateral roots are used and the larger divisions can be planted directly in the open field.
The plants need a planting distance of about 30 cm and germinate at a temperature of about 20 ° C. The seeds should be covered with an amount of earth equal to about 1-2 times their thickness. However, it is advisable to avoid water stagnation during the first weeks. Transplant young seedlings when they are already vigorous.

Customs and Traditions –
Sium sisarum is a plant that was once often cultivated for its edible root; today, unfortunately, it has practically fallen into disuse despite having a very tasty root, easy to grow and relatively productive.
This plant is an ancient vegetable once considered a delicacy, grown in Europe until the 18th century. Due to the relatively high natural sugar content, the plant was also ground, refined and used as a sweetener before the much more productive sugar beet spread.
In edible use, both raw and cooked roots are used; it has a firm, sweet and floury consistency from which the central part of woody and fibrous consistency must be removed.
The roots have a very acceptable taste even when raw, a bit like a cross between carrots and parsnips but with a nutty flavor.
The roasted root was used as a coffee substitute.
The origin of the plant is not certain, it seems of Asian origin, and it arrived in Europe before or before the Roman era. It is assumed that it was mentioned by Pliny the Elder as a favorite of Emperor Tiberius, although this may also have been a reference to a parsnip or carrot.
The 12th-century Benedictine abbess Hildegard von Bingen discussed the medicinal properties of Sium sisarum in her work Physica:
please note that this plant should however be eaten in moderation due to negative effects on digestion and assimilation.
The plant has also found use in the cosmetic and medicinal fields.

Preparation Method –
The roots of Sium sisarum, above all in the past, had a particular space in the kitchen and in the relative recipes, of which the literature gives us a good confirmation.
In culinary use, they are cut into pieces, boiled and served as parsnips or carrots. The roots can be stewed, baked, roasted, fried in batter like pancakes or whipped, and even grated and used raw in salads. In some roots a fibrous core may be present, also linked to the conditions and soils in which the plant grows. in these cases the central part must be removed.
Furthermore, this plant has entered in the past in various national dishes and recipes mostly linked to popular traditions.