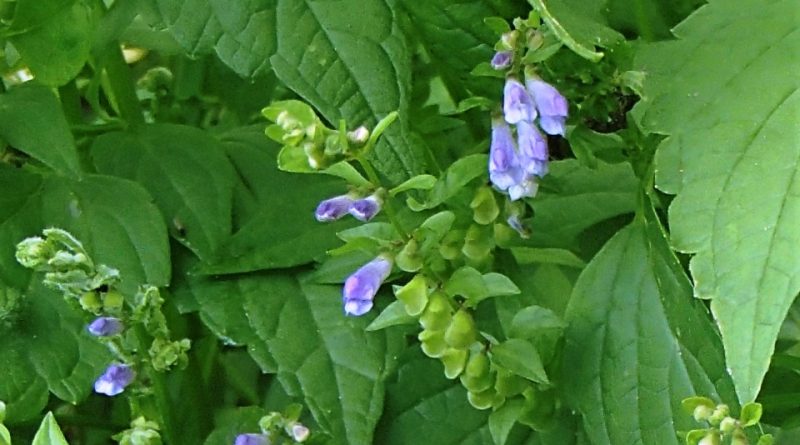 Etymology –
The term Scutellaria comes from scutellus (diminutive of scutus scudo): in reference to the small transverse scale that characterizes the calyx of the flowers in this genus.
The specific lateriflora epithet comes from látus, láteris lato and from flos, floris fiore: with flowers arranged on one side.

Geographic Distribution and Habitat –
Scutellaria lateriflora is a perennial plant native to North America and present in an area that mainly includes the western part of the United States and the north-eastern part of the same.
It is present but not very widespread, as it is imported, also in Italy and northern Europe.
Its natural habitat is varied and the plant can be found in moist sedge meadows, open woods and floodplains, wet groves, swamps, swamps, infiltrations and springs, edges of spring pools and ponds, humid depressions in limestone clearings and shaded areas. of cliffs. In wooded areas this plant benefits from any disturbance that reduces the density of woodland vegetation; it is typically found in partially shaded wetlands. 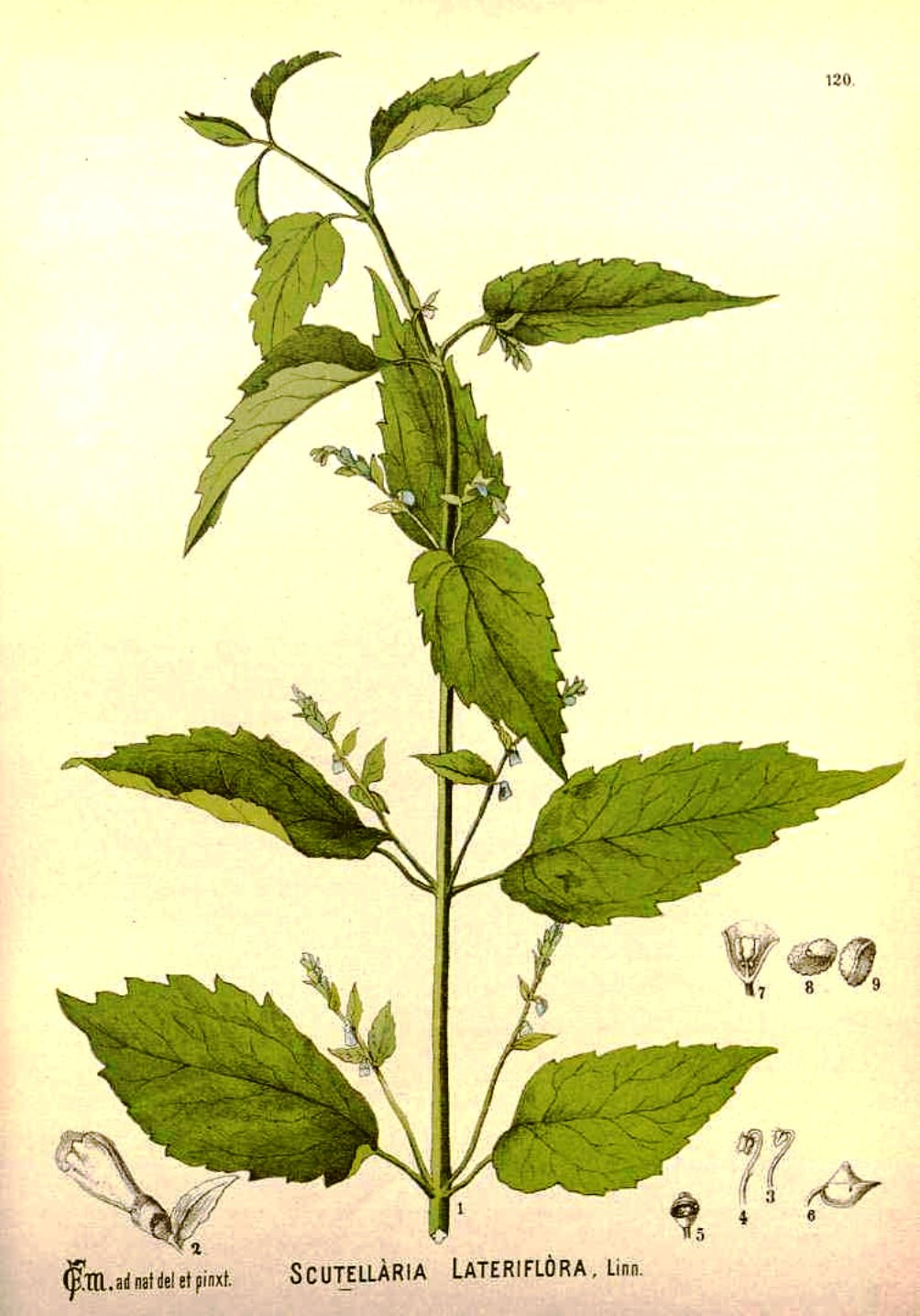 Description –
Scutellaria lateriflora is a herbaceous plant with an erect posture and a maximum height of 60–80 cm.
The stems are square and erect, generally hairless or sometimes with fine hairs, branched in the upper plant.
The leaves are up to 6.5 cm long and up to 3.8 cm wide, thin, with coarse teeth, mostly hairless or with few sparse hairs, on a stem up to just over 1.5 cm long. The lower leaves are broadly lanceolate, rounded at the base that taper to a point, typically withered (deciduous) mid-season. The upper leaves become smaller and more lanceolate.
The flowers are blue and are just under 1 cm long. Most of the flowers do not appear at the top of the main stem, but are produced along the lateral branches that grow from the axilla of the leaves.
The flowers are in pairs in racemes that emerge, as mentioned, from the axil of the leaves in the upper plant. At the base of each pair of flowers there is a leafy bract; the bracts get smaller as they rise up the stem. The flowers are small, irregular in the shape of a trumpet, from 0,6 cm to 1,7 cm long and covered with short hairs; the lower lip is flared slightly larger than the hood-shaped upper lip. The cup holding the flower has a small ridge-shaped protuberance at the top.
The fruit is a schizocarp.

Cultivation –
Scutellaria lateriflora is a plant that prefers an exposure ranging from light shade to full sun, in humid conditions and soils with abundant organic matter. It can also grow in shallow, rocky or gravelly soils as long as they retain moisture during periods of drought.
If the plant is grown for ornamental purposes, after flowering it is advisable to trim, to stimulate new vegetation and flowering.
It is also advisable to fertilize in spring with organic fertilizer and irrigate moderately during the dry heat period.
Propagation occurs both by seed and by division of tufts.

Customs and Traditions –
Scutellaria lateriflora is a plant of North American origin used since ancient times for medicinal use.
The Native Americans used this plant to treat gastrointestinal and respiratory inflammation. Cherokee women used it as an emmenagogue. It is still in use today in folk medicine.
Its use is useful in the treatment of:
– allergies and respiratory tract infections: relaxes the bronchial muscles and its flavonoids have an anti-inflammatory action
– prevention of heart attacks: two studies conducted on animals in Japan have shown that the active ingredients contained in scutellaria are able to increase the so-called good cholesterol (HDL) by decreasing the incidence of the cholesterol factor on heart problems.
In vitro it is neuroprotective: the ability to improve learning has been demonstrated
It is beneficial for the intestine: it seems to favor the restoration of damaged intestinal epithelia.
In addition, this plant is attributed with sedative and relaxing properties: this makes it useful in anxious states and insomnia. Some species of Scutellaria, including baicalensis and lateriflora, have shown anxiolytic activity in both animals and humans, thanks to components such as baicalin, wogonin, apigenin and scutellarin.
The root of Scutellaria lateriflora is rich in flavonoids, coumarins, terpenes.
It has been reported that a number of flavones present in S. lateriflora bind selectively with high affinity to central benzodiazepine receptor sites, suggesting that flavones exert anxiolytic and other benzodiazepine effects in rats.
Flavonoids are found throughout the plant but are more concentrated in the leaves and concentrations have been seen to decrease slightly as the plant matures. The dried leaf is said to contain around 50 milligrams of flavonoids per gram. Flavonoids are easily extracted using hot water.
The scutellarine is transformed by hydrolysis into scutellarine.
As for the contraindications in the intake of this plant, please note that there are no particular restrictions in the intake of Scutellaria lateriflora, however, upon medical advice, it may not be recommended to use it during pregnancy or breastfeeding, to children, in association with others sedative drugs.

Preparation Method –
Scutellaria lateriflora (as well as other sciutellarie) is found on the market first of all as a food supplement to be taken orally in the form of tablets.
It can be purchased in specialized shops and herbalists, both in the form of a dried plant to be able to make herbal teas and infusions, and as a mother tincture obtained from the maceration of the whole shredded plant, for three weeks in a mixture of food alcohol and water.
The scutellaria is also used in cosmetics.