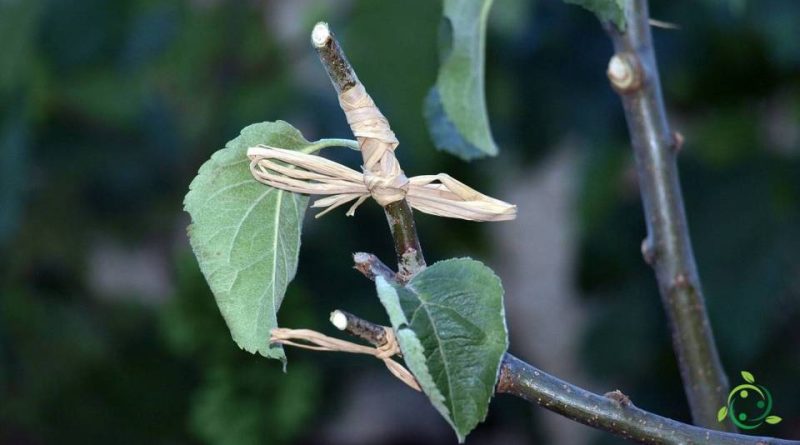 The term grafting means that agronomic operation of agamic multiplication carried out by man, which involves the intimate union of two different entities that are genetically quite similar. In grafting, the grafted plant (the one with the roots) is called rootstock while the part of the other plant (bud or sprig), induced to develop on the rootstock, is called graft or scion.
Grafting is therefore an agronomic practice adopted for the agamic multiplication of plants and carried out with the anatomical-physiological fusion of two different individuals (bionti), respectively called “rootstock” and “scion”, of which the first constitutes the basal part of the plant and the second the aerial part. In some techniques, grafting is carried out with three individuals, interposing a third bionte, called “intermediary”, between the rootstock and the graft.
The grafting technique consists in welding a part of the graft onto the rootstock, represented by a portion of a branch or a bud, in the latter case called “eye” or “shield”. In this way, a single plant formed by two different portions is obtained. The histological fusion takes place thanks to the callus that forms between the two cut surfaces, precisely where the meristems of bills meet.
Grafting is widely used in floriculture, gardening and fruit growing where it is widely adopted for the multiplication of woody plants, more rarely for herbaceous ones.
The success of the graft depends not only on a perfect technique, which consists in creating cuts of the graft and rootstock as much as possible the same or sometimes perfectly coincident (as in the case of the English double cleft graft) in the right period (usually in spring or at the end of summer, that is when the plants are “sucked”) but also from the knowledge of the affinities between the two individuals.
In addition to being a widely used agamic propagation system, the graft is mainly used for the following reasons:
– re-graft an arboretum to replace an outdated cultivar or to introduce one, old or new, preferable to the present one. In this case the graft is proposed as an alternative to the removal and replanting of the arboretum;
– regulate development, longevity, earliness: the rootstock is able to transmit specific physiological and phenological characteristics to the graft. The choice of rootstock affects the vigor, limiting the development of the aerial part (dwarf rootstocks) or strengthening it, the longevity of the cultivar and, finally, the earliness of production, anticipating or delaying the flowering period;
– adapt a cultivar to particular soil and climatic conditions: plant species and varieties have different sensitivities to certain physical and chemical properties of the soil (texture, limestone content, drought, etc.); the grafting of a sensitive cultivar on a less sensitive species or variety allows it to be adapted to specific conditions. Similar considerations can be made for climate adaptation;
– resistance to parasites, diseases and pests: the use of rootstocks resistant to particular adversities allows to avoid attacks on root systems or to contain their effects. The most striking example is the fight against the phylloxera of the vine by grafting European vines on American rootstocks more resistant to the pest;
– detect viroses and heal infected material: grafting on indicator plants is one of the means adopted to diagnose the presence of a virosis. In micropropagation, the micrograft technique is also used to heal virosis, as the meristematic and embryonic tissues are not yet infected by the virus;
– introduction of pollinators: in arboretums where pollination is noted, it is possible to resort to the re-grafting of a certain number of plants with cultivars that have a pollinating function;
– correct the skeletal structure of the plant: the graft can be used to correct defects in the development of the branches in the parts deficient for various causes.
– some clones of many species (arboreal and not) have difficulty in rooting, so grafting is the only method of propagation.

Types of Grafting
Depending on the needs, the characteristics of the two bionts and the objectives to be achieved, there are various types of grafting which are summarized below:

Bud grafting – bud grafting is done using only the buds present in the branches of the plant. Bud grafting techniques graft these structures onto the most vigorous branches of the mother plant, also called rootstock. Generally, the grafting of the bud into the rootstock takes place in the center of the branch or at the foot. Ideal for fruit trees, it is one of the simplest types of grafting to make. Depending on the moment in which they are carried out, they are divided into: vegetative bud, dormant bud, whistle and patch grafting.

Vegetative bud grafting – this grafting is performed in early spring, using buds that are taken from cut branches during vegetative rest and stored in the refrigerator. The court is engraved with the grafting knife until it affects the sapwood, making a transversal and a longitudinal cut in order to form a T. The buds to be grafted are then detached from the preserved branches, removing gem by gem with a portion of bark adherent with a small portion of sapwood (badges); the edges of the T-engraved subject are spread apart and the shield is inserted so that the gem remains clearly visible. Due to the appearance that the grafted gem takes, it is also called an eye graft.
Dormant bud grafting – is a graft that is performed in late summer, keeping the leaf petiole attached to the bud. In this way, rooting can be controlled, since if the petiole detaches spontaneously it means that the graft was perfectly successful.

Zufolo grafting – this grafting can be done in spring or late summer, depending on the plant you are working on. It is carried out with a special grafting tool with which the bud to be grafted is obtained by making two parallel transverse cuts above and below the bud three or four centimeters from each other, joined later by a vertical cut. The same operation is carried out on the rootstock, thus obtaining a cylinder of bark of the same width as the bud to be grafted. At this point the bark cylinder with the bud is inserted on the rootstock, it is tied with raffia and, after two or three weeks, it is cut to avoid bottlenecks.

Patch graft – this graft differs from the others in that a larger surface area of ​​bark with bud applied to the peeled rootstock of an equivalent surface is used. Three incisions are made on the rootstock, one upper transverse and two longitudinal ones, in order to delimit a rectangular surface. Starting from the transverse incision, the bark is pulled downwards for a stretch equal to the extension of the longitudinal cuts, then the piece is inserted so that it fits perfectly with the incisions made on the rootstock and then tied with the raffia.
Scion grafting – this type of graft differs from bud grafting because the graft (the part to be grafted) consists of a branch containing two or three buds. There are countless variations, from interlocking grafts to crown grafts. When the branch is wedged inside the triangle slot of the plant that acts as a rootstock, we will have the interlocking graft, when two or more branches are inserted between the bark and the trunk of the tree, we will have, instead, the crown graft.

English split grafts – English split grafts are used when you are guaranteed to bet on a potentially near-safe technique. To succeed, it is necessary to have seedlings of the same size as the scions that must be grafted in order to make them fit together almost perfectly. The diametrically split grafting consists in obtaining a round surface from the sturdiest branch of the rootstock, making a cut along its entire diameter where the scion, or the branch with the buds, will be grafted. One or two scions can be inserted into the cleft. In the first case, the scion will be placed in the center, in the second, on the sides of the cleft. In the lateral split grafting, the cut to graft the scion is made on one side of the rootstock. In simple English cleavage grafts, the diameter of the scion and the surface of the rootstock must coincide perfectly. In the English double split graft, another incision is made on the scion and rootstock in order to better fit the two parts.

Crown grafting – in this grafting technique, cuts are made at the edges of the rootstock surface. In these spaces will be inserted at least three slips with two buds, which will form a kind of crown that surrounds the circular surface of the mother plant. It is very useful in case you need to intervene on citrus plants. In this case, the scion will need to be inserted into the bark. The crown graft has a high percentage of engraftment.