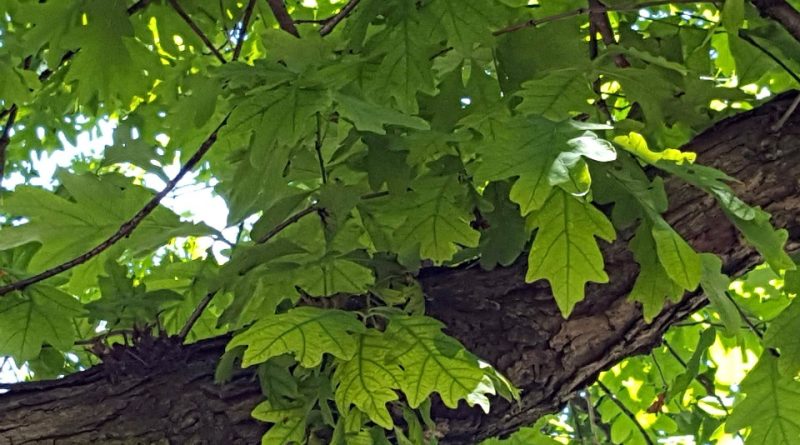 The white oak (Quercus alba L.) is an arboreal species belonging to the Fagaceae family.

Etymology –
The term Quercus comes from quercus, the Latin name of the oak, a plant sacred to Jupiter.
The specific epithet alba comes from the Latin albus, a, um, referring to the flowers, leaves, bark or other parts of the plant.

Geographic Distribution and Habitat –
White oak is a plant native to eastern and central North America and found in an area ranging from Minnesota, Ontario, Quebec and southern Maine to northern Florida and eastern Texas.
Its habitat is that of the arid woods of north-eastern America where it grows in gravelly areas, sandy plains, usually on deeper and well-drained clays, even on thin soils on dry mountain slopes, sometimes on arid soils; at altitudes up to 1,600 m. 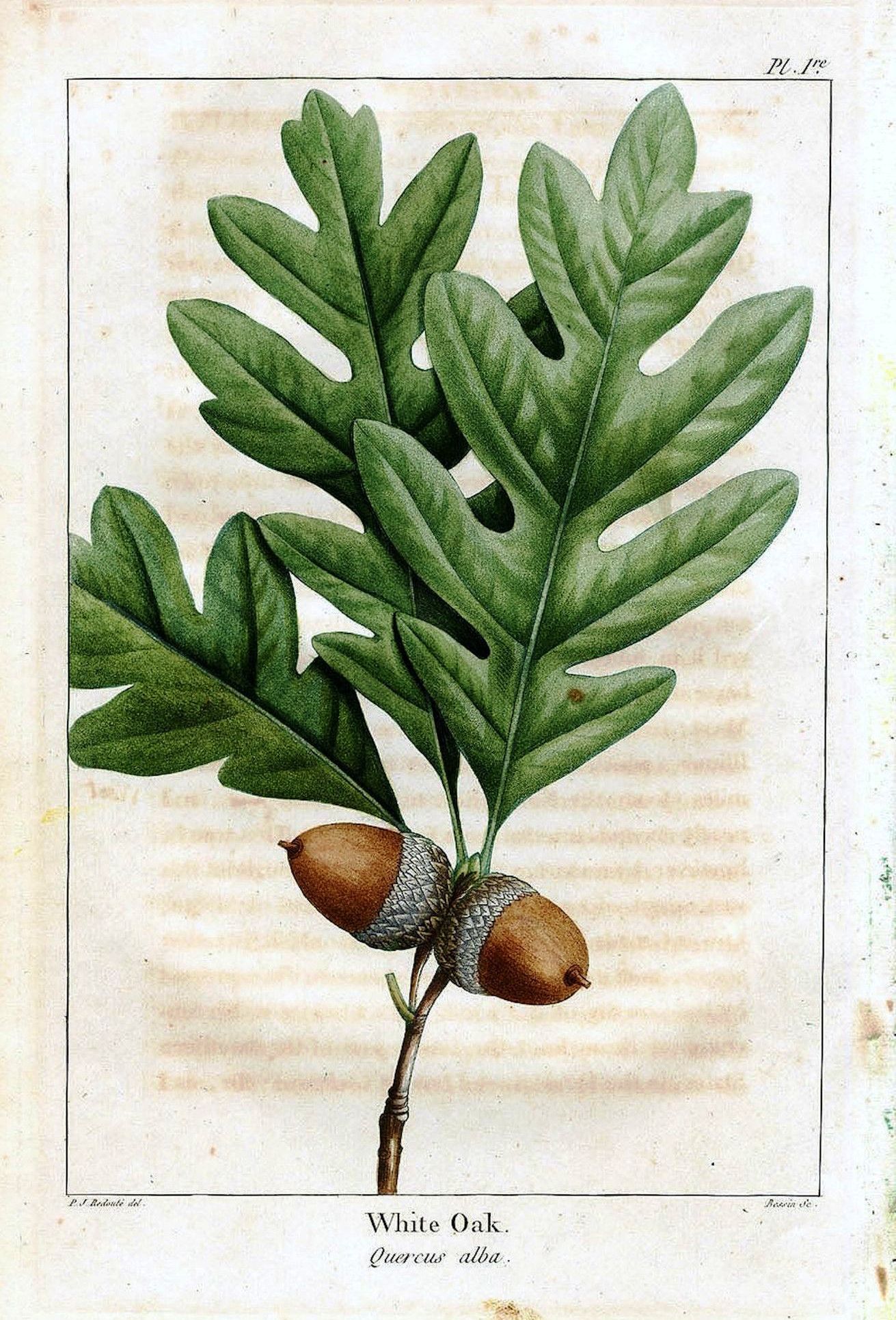 Description –
Quercus alba is a tree that can reach 35 meters in height.
It has a light gray bark with a scaly appearance; as the plant ages it becomes progressively more fissured.
The leaves are about 20 cm long and about 10 cm wide, narrower at the base, deeply incised and with different lobes, initially they have a pinkish color with a whitish down, then over time they become intense green and shiny on the upper page and green – bluish on the lower one. The species is deciduous and in autumn the leaves take on a very intense red color before falling.
The male flowers are yellow-green catkins, the female ones are not very showy and separated. They appear towards the end of spring.
The fruits are acorns about 2.5 cm long and are enclosed within the scaly capsule for about a quarter of their length.

Cultivation –
White oak is a fairly tolerant plant of a variety of habitats and can be found in both mountain peaks and valleys, in both dry and humid habitats and in moderately acidic and alkaline soils. However it is primarily a lowland tree, but reaches altitudes of 1,600m in the Appalachian Mountains. Frequent wildfires in the Central Plains region of the United States have prevented oak forests, including Q. alba, from expanding into the Midwest. However, a decrease in the frequency of these natural fires after European settlement caused a rapid expansion of oak forests in the Great Plains, negatively affecting the natural grassland vegetation.
This plant is grown as an ornamental tree somewhat infrequently due to its slow growth and ultimately huge size. It does not tolerate urban pollution and saltiness and, due to its large taproot, is not suitable for a road tree or parking islands.
Propagation occurs by seed even if this rapidly loses vitality if it is left to dry out. It can be kept moist and cool during the winter, but it is best to sow as soon as it is ripe in an outdoor seedbed, although it must be protected from mice, squirrels, etc. Small amounts of seeds can be sown in deep pots in an unheated seedbed.
The plants produce a deep taproot and must be transplanted as soon as possible, in fact the plants sown in the final positions will produce the best trees.

Customs and Traditions –
Quercus alba is a plant that in its natural state can reach a considerable height with a large crown and large branches.
Acorns, which are less bitter than other oaks, can be eaten by humans but are above all a valuable food for wildlife, especially turkeys, ducks, pheasants, grackles, jays, woodpeckers, thrushes, rabbits, squirrels and deer . White oak is the only food plant that caterpillars Bucculatrix luteella and Bucculatrix ochrisuffusa feed on.
The dried leaves of this oak are also occasionally eaten by some species of deer and other animals.
Acorns contain around 6% protein and 65% carbohydrates. They are low in tannin and require little or no leaching. They can be toasted and then eaten, their flavor is something like a cross between sunflower seeds and popcorn.
Acorns are usually cooked before being eaten, although they can be eaten raw. They can be eaten whole, although they are most commonly dried, then ground into a powder and used as a thickener in stews, etc. or mix with cereals to make bread.
Tannins are water soluble and therefore the easiest way to remove or reduce tannin levels is to soak them in water.
Roasted acorns are coffee substitutes and caffeine-free.
Quercus alba has also found use over the centuries in the medicinal field.
It was often used medicinally by several native tribes of North American Indians, who especially valued it for its antiseptic and astringent properties and used it in the treatment of many ailments. Instead, it is little, if at all, used in modern herbal medicine.
The inner bark contains 6 – 11% tannin, has powerful antiseptic and astringent properties and is also an expectorant and tonic.
As for the biochemical content of Quercus alba, it contains the following active ingredients:
– Hailin / roburin E, castalagine / vescalagine, gallic acid, glucose monogalloyl (glucogallin) and valoneic acid dilactone, glucose monogalloyl, glucose digalloyl, glucose trigalloyl, rhamnose of ellagic acid, quercitrin and ellagic acid.
The bark is boiled and the liquid drunk in the treatment of hemorrhoids and diarrhea, intermittent fevers, cough and cold, phthisis, asthma, loss of voice, etc.
The bark was chewed to treat mouth ulcers.
Externally it is used as a cleanser for rashes, burns, bruises, ulcers etc. and as vaginal douches.
It has also been used as a wash for muscle aches.
The oils obtained from the pressed acorns have been used to relieve joint pain.
Any galls produced on the tree are rich in tannins and therefore strongly astringent. They can be used in the treatment of various conditions including bleeding, chronic diarrhea, dysentery, as a scrub on cuts and wounds, as a mouthwash to treat toothache or gum problems, etc.
Other uses include agroforestry ones.
White oak is potentially valuable for use in reforestation projects and appears to have potential for use on other types of disturbed sites.
It was planted on degraded land in Ohio, Indiana, and Illinois and has shown good growth and survival on graded soil and mine shafts.
It adapts well to clayey and clayey debris with a pH between 5.5 and 8.0.
Furthermore, as the leaves of most species of this genus are more or less rich in tannins, a mulch of these can be placed around vulnerable plants to repel slugs, slugs, larvae, etc. Fresh leaves should be used with caution, as they can use some of the nitrogen in the soil and this inhibits plant growth.
Furthermore, both from the bark and from the galls, a brown dye is obtained that does not require mordant. If you use mordants you can get yellow, chrome and gold colors.
The wood of this tree is strong, very heavy, hard, tough, tough and fine-grained, durable.
Wood glues well, works very well and accepts a variety of finishes. It is one of the most important woods in North America; it is used for cabinet making, furniture, paneling, flooring, construction, mine props, agricultural tools, etc.
It is also very popular for making the staves of barrels for storing wine and spirits.
Wood is also a good fuel that produces a lot of heat. It should be noted, among other uses, that this oak is widely used in Japanese martial arts for some weapons, such as the bokken and the jo. It is prized for its density, strength, resilience, and relatively low chance of chipping if broken by impact, compared to substantially cheaper red oak.
Musical instruments are also made from this wood
Additionally, this plant was the official state tree of Illinois after being selected by a vote of school-age children.

Preparation Method –
White oak is a plant that in addition to finding use in the food sector with the use of its acorns, finds an interesting use in the medicinal sector.
For these purposes, the bark is used, which must be harvested in spring to have the best characteristics.
As for the use of acorns, in order to be able to consume them for food, they must be treated, preferably, in various ways.
Among the various methods, some are listed:
– A traditional method of preparing acorns was to bury them in swampy soil during the winter and allow the moist soil to gradually leach the tannins.
– Another method was to wrap the acorns in a cloth bag and put them in a stream for several weeks.
– Or they dry to powder before soaking, which speeds up the process. The fastest method is to use hot water, cooking the powder and changing the water several times until the cooking water is no longer bitter. Alternatively you can use cold water (which is said to produce the best quality flour). In this case, the powdered acorns must be immersed in cold water for 12 – 24 hours, then discarded. This process must be repeated a certain number of times until the soaking water is no longer bitter.