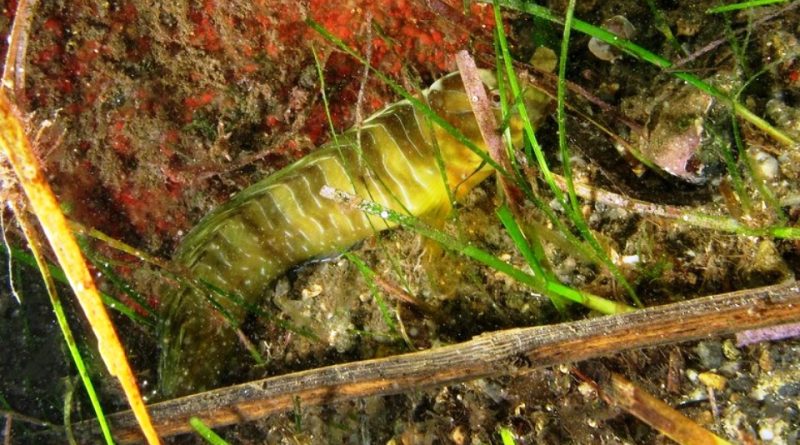 The basilisk blenny (Salaria basilisca Valenciennes, 1836) is a sea fish belonging to the Blenniidae family.

Geographic Distribution and Habitat –
Salaria basilisca is an endemic fish of the Mediterranean Sea. It was found in the western basin. It is a rare species everywhere, even in the Italian seas where it is present in Sardinia and cited for the Ligurian Sea, the island of Elba, the Adriatic, the Aegean and the Gulf of Naples.
As far as its habitat is concerned, it is a thermophilic species and also a stenoaline so it is never found in brackish waters. It mainly resides in the seagrass meadows and in summer it can be found in shallow water among the pebbles. 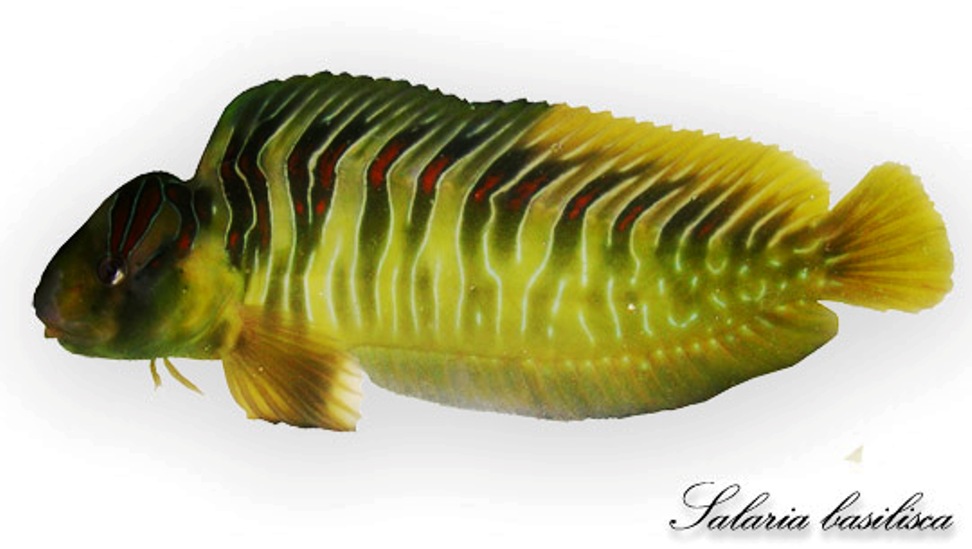 Description –
Salaria basilisca is a fish that can reach 18 cm and has an elongated body, somewhat compressed laterally and without scales. The lateral line is hardly visible.
It has an evident sexual dimorphism; the male has a more rounded cephalic hump than in the congener and in the reproductive period, it has a blue-green color with double reddish bands.
The females have a much smaller size than when, with age, they become male specimens (protogynous hermaphroditism).
It is recognized by the brownish-green color on the back and more yellowish in the ventral region. Characteristic are the blackish or purplish vertical bands with white margins, which at times continue on the dorsal, which has a gray-brownish tint like the other fins. The interradial membrane of the dorsal, in correspondence with the vertical bands, has darker bands that fade upwards. At the base of the caudal fin, sometimes, there may be white spots.
The head, which presents itself with characteristic brown spots, as mentioned has an arched profile conformation and in some specimens there is a crest, probably more evident for the males in the reproductive phase. Since this protuberance can also be present in small specimens, when in theory they are still females, the cause could be ascribed, however, to the reproductive phase in general.
The eye is small, rounded and set apart from the profile.
In males the muzzle is rounded while in females it is a little more pointed.
It has a rather uniform dorsal fin that starts from the nape and continues without indentation between spiny and articulated rays. The anal one develops uniformly and begins at the level of the last spiny ray. Both the dorsal and the anal fins end with a small membrane that joins the last ray with the caudal peduncle. The caudal has a rounded margin. The pecs are broad and rounded.

Biology –
In the Salaria basilisca there is protogynous hermaphroditism as the females after the reproductive phase and with age become male specimens.
Many females lay their eggs, which are sticky, in the same place, usually among the posidonia and are fertilized by a single male who then stands guard over the nest.

Ecological Role –
The Salaria basilisca is a fish that lives mainly in the seagrass meadows and in summer it can find itself in shallow water among the pebbles “walking” on the bottom, leaning on the ventral and pectoral fins.
This species feeds like the congeners of benthic invertebrates, therefore based on annelids and crustaceans.
It is caught with pots, lines, trammel nets and gangamelles.
However, it has little food value.
As far as the interest in aquarium is concerned, it is a very beautiful species but very difficult to breed and delicate, as well as rare.