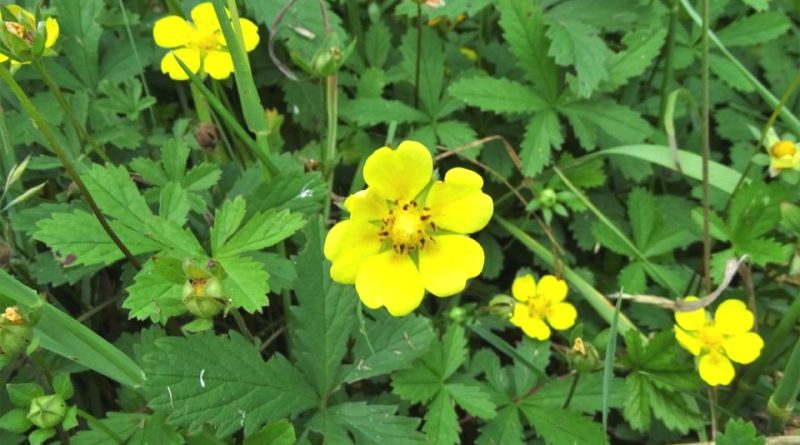 The creeping cinquefoil or European cinquefoil or creeping tormentil (Potentilla reptans L., 1753) is a herbaceous species belonging to the Rosaceae family.

Etymology –
The term Potentilla is the diminutive of potent potens: reference to the medicinal properties of some species of this genus.
The specific epithet reptans comes from repto crawl on the ground: creeping, reptant.

Geographic Distribution and Habitat –
The creeping cinquefoil is a plant of Paleotemperate origin typical of Europe and western Asia, which later became Subcosmopolitan.
In Europe it is present not only in the plains (in the north up to England and Norway) and also on the various reliefs between the Pyrenees and the Caucasus. It is also found in northern Africa as well as in Asia (Siberia, Himalaya and China). In North America it is not native but was introduced from Europe.
In Italy it is widespread everywhere and is a very common plant.
Its habitat is that of pioneer vegetation, along roads and paths, on the edges of crops and gardens, in lacunar marsh vegetation, on loamy-clayey, humiferous and fresh soils, rich in nitrogen compounds, from neutral to subacid, from sea level to the mountain range, up to 1,600 m asl. 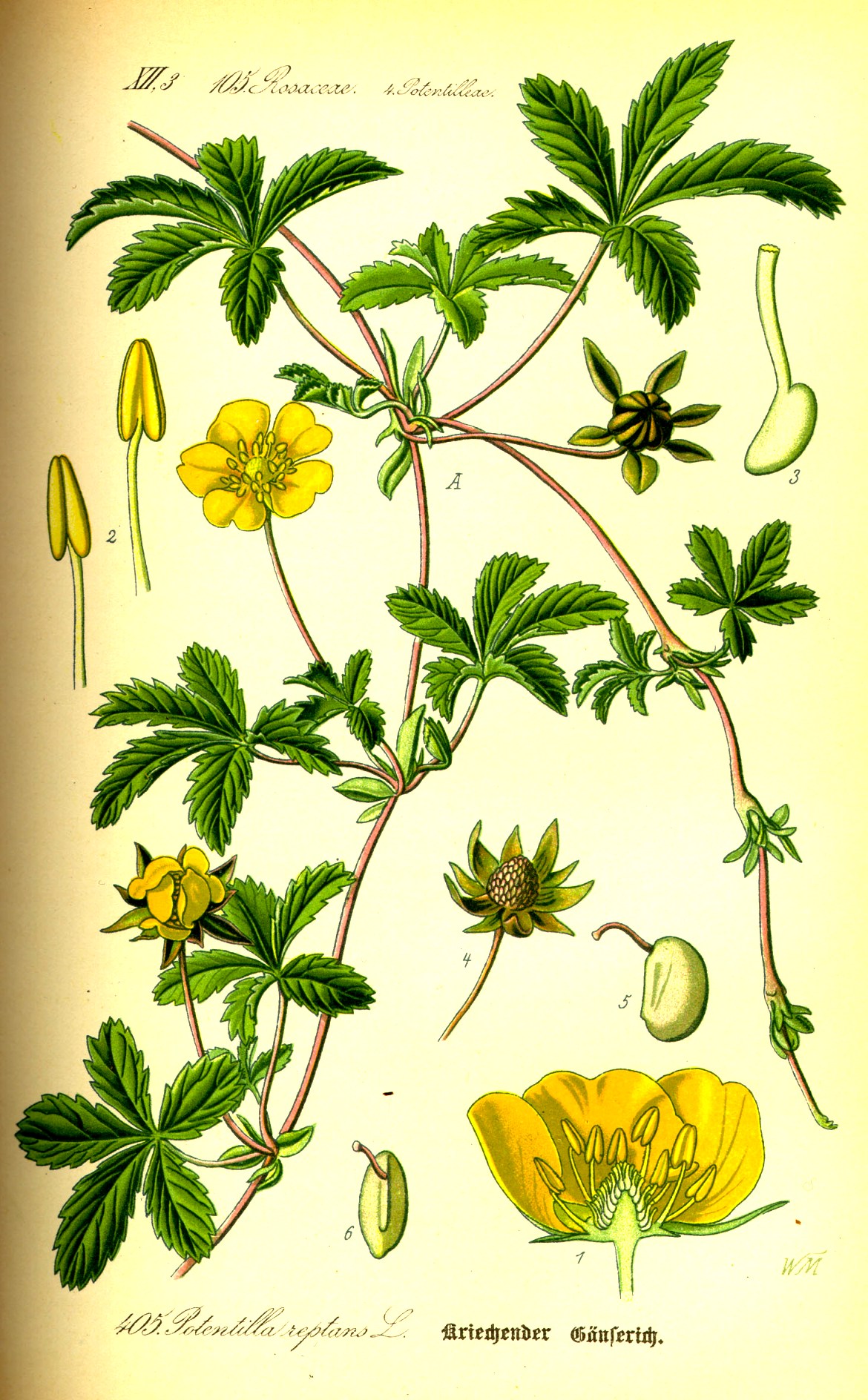 Description –
Potentilla reptans is a small perennial herbaceous plant with tap root, creeping stems, stoloniferous and rooting at the nodes, reddish stolons, up to 1 meter long; the whole plant has a ± scarce hairiness and has a height of 10 ÷ 30 cm.
The basal leaves are long pedunculated and deeply pinnate, divided into 5 or rarely 7 oblong-ovate lobes, green in color on both sides, they are glabrous or pubescent, with a roughly toothed margin with 6 ÷ 7 teeth per side. At the base of the leaves, adnate to the peduncle, there are leafy stipules. The cauline leaves are similar to the basal, but smaller and subsessile.
The flowers are solitary, hermaphrodite, actinomorphic, pentamer, axillary to the basal leaves, on erect peduncles, measuring 1 ÷ 2 cm of diameter, golden yellow in color.
The persistent green calyx is formed by 5 hairy, triangular-ovate sepals with obtuse apex, with the epicalyx present; ovary over.
The corolla is composed of 5 longer petals of the calyx, obstructed with a blunt apex; numerous stamens arranged in 3 series, hairy in the lower half and inserted directly on the calyx; ellipsoid anthers, first yellow then brown; numerous free carpels; fleeting, elicate styles.
The plant blooms between May and September, depending on the area where it grows.
The fruits are acheneti (poliacenes) with numerous ovoid achenes, 0.9-1.2 mm, wrinkled, tuberculous, glabrous, brown.

Cultivation –
Potentilla reptans is a plant that is harvested in nature for local use as a food, medicine and source of materials.
It is a plant that is easy to grow in a substrate that can be both calcareous and siliceous, while the pH is neutral; the soil must have good nutritional values ​​and be moderately humid.
The plant spreads vigorously and can be invasive.
Propagation occurs by seed, with sowing in early spring or autumn in a cold seedbed. Transplanting into individual pots should be done as soon as the plants can be handled and grown in a cold greenhouse for their first winter.
The transplant is then carried out in late spring or early summer, after the last foreseen frosts.
Alternatively, it can be sown directly in spring in more temperate climates.
Another method of multiplication can be by means of divisions to be carried out in spring or autumn. Larger divisions can be planted directly in their permanent locations.

Customs and Traditions –
The creeping cinquefoil is a plant used for both edible and curative use.
In the past, the whole plant enjoyed a reputation as an antidote to heal the bites of poisonous animals, the juice was attributed useful properties in the treatment of lung diseases.
In folk medicine it is mainly used in case of diarrhea, nosebleeds, gum inflammation and for baths in case of wounds that are difficult to heal.
The healing properties, such as astringent and anti-inflammatory properties, are linked to the content of tannins and other substances such as resin, rubber and calcium oxalate.
The parts used are: the roots and leaves in the form of a decoction or syrup.
In the food sector, young and tender leaves are used which can be used in the preparation of salads.
Other uses include those for the cosmetic industry that uses this plant to produce anti-wrinkle creams (it seems that the skin is relaxed by compresses prepared with some parts of the plant).
It is also used in gardening as it can also be used for rock and alpine gardens, taking care, however, to pay attention to where it is planted as it is invasive.

Preparation Method –
Potentilla reptans, as mentioned, is used in the food and pharmaceutical fields.
In cooking, tender leaves are used to add them to other salads and flavor them.
In the medical field, alcoholic extracts obtained from the roots are used which have shown moderate antimicrobial activity against common wound pathogens.
An infusion of the dried herb can also be obtained which is used in the treatment of diarrhea, etc; it is also used as a gargle for sore throats and is used externally as an astringent lotion.
A concentrated decoction obtained from the roots relieves toothache.
Among other uses, it should be remembered that the plant is an ingredient in many anti-wrinkle cosmetic preparations for the skin.
The cosmetic industry in fact uses Potentilla reptans in the production of anti-wrinkle creams.