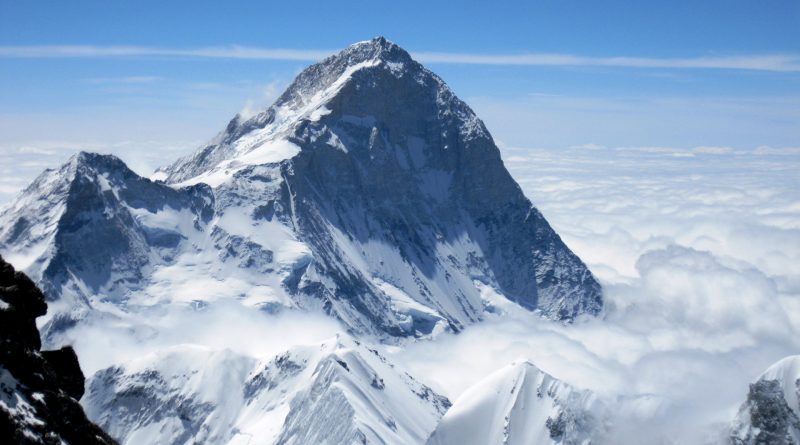 Mount Makalu (in the Nepalese language: मकालु, in China: 马卡鲁 山, in Pinyin: Mǎkǎlǔ Shān) is the fifth highest mountain on Earth.
This mountain has a height of 8,463 m a.s.l., belongs to the Himalayas and is located on the border between Nepal and Tibet, about 22 km east of Mount Everest.

Geography –
From a geographical point of view, Makalu is an isolated peak with an imposing appearance: this mountain is in fact made up of an almost perfect pyramid with four sharp crests. It is considered among the most difficult mountains to climb due to the complete exposure of its walls to the winds. Few climbs have been carried out and it is one of the last eight thousand to have been climbed in winter.
About 3 km north-northwest of the main peak but separated from it by a saddle called the Makalu hill (Makalu La), we find the secondary peak of Kangchungtse (also called Makalu II), of 7,678 m asl, another saddle separates instead the Kangchuntse from Chomo Lönzo (7,815 m asl). East of the main peak is the secondary peak called Makalu Southeast (8,010).
Makalu is within the Makalu-Barun National Park.

History –
The etymology of the name Makalu is not clear even if it is hypothesized that it comes from a deformation of the Sanskrit term Maha – kala (great time), one of the names by which the Hindu deity Shiva was called; according to other sources the term derives from a Tibetan lemma which translated means “big black” with evident reference to the color of the dark granites visible on the mountain slopes.
The first attempt to climb this peak dates back to the spring of 1954; it was operated by a US expedition led by mountaineering scientist William Siri (1919-2004). The expedition faced the southeast wall but stopped at 7,100 meters. A New Zealand expedition, in which Sir Edmund Hillary also participated, attempted to reach the top of the mountain in the same spring of 1954, but was also unsuccessful due to weather conditions.
The summit of Makalu was conquered on May 15, 1955 by Lionel Terray and Jean Couzy, belonging to a French expedition led by Jean Franco, Guido Magnone and Sirdar Gyaltsen Norbu who reached it the following day, followed by Bouvier, S. Coupe, Leroux and by A. Vialatte. The French team faced it from the north face and from the north-east ridge, through the saddle route located between Makalu and Kangchungtse (Makalu-La) from that moment called “French way”.
The first woman to make the climb was the American Kitty Calhoun Grissom, on May 18, 1990.
The first Italian woman to climb Makalu was Cristina Castagna, who reached the summit on 12 May 2008.
Finally, the first winter ascent dates back to 9 February 2009 and was operated by Simone Moro and Denis Urubko.
Unfortunately on 27 January 2006 the French climber Jean-Christophe Lafaille disappeared on Makalu attempting the first winter ascent, even solo.
Furthermore, on May 18, 2004, the Ukrainian climber Vladislav Terzyul met his death there; it is not known for certain whether he had reached the top, so his presence on the list of those who have climbed all the 8000ers is debated.
Mount Makalu boasts other climbs and from different sides.
The path to reach the base is not easy as it is a summit that implies the overcoming of the greatest difference in height, since it starts from 470 meters from Thumlingtar to reach the 8,462 meters of the summit. The long approach trekking also implies a continuous ups and downs that put a strain on the mountaineers who head towards the base camp, often not yet perfectly acclimatized in the first stage of the expedition.

Flora –
As mentioned, Mount Makalu falls within the Makalu-Barun National Park which has a high diversity of forest types that are characteristic of the eastern Himalayas, ranging from tropical forests with dipterocarpaceae at an altitude of 400 m to conifers subalpine reaching an altitude of 4000 m. Aspects of forests vary with seasonal availability of moisture, temperature, and snow cover at different altitudes and slopes. Forests below 2000 m are heavily influenced by subsistence agriculture, so that only a few fields of ecological importance remain there. Above 2000m, forests are generally extensive as the cool, humid climate suppresses agricultural activity. Forests extend over five bioclimatic zones:
– tropical – below 1000 m with Sal basements;
– subtropical – from 1000 to 2000 m with the bases of Schima and Castanopsis;
– lower and upper temperate – from 2000 to 3000 m with broad-leaved evergreen species of varieties of oak, lauraceae, laurel and broad-leaved maple and magnolia;
– subalpine – from 3000 to 4000 m with plantations of Himalayan birch and eastern Himalayan fir (Abies spectabilis); along a passage from the external, southern slopes to the internal valleys, these stands are dominated by conifers such as juniper and fir.