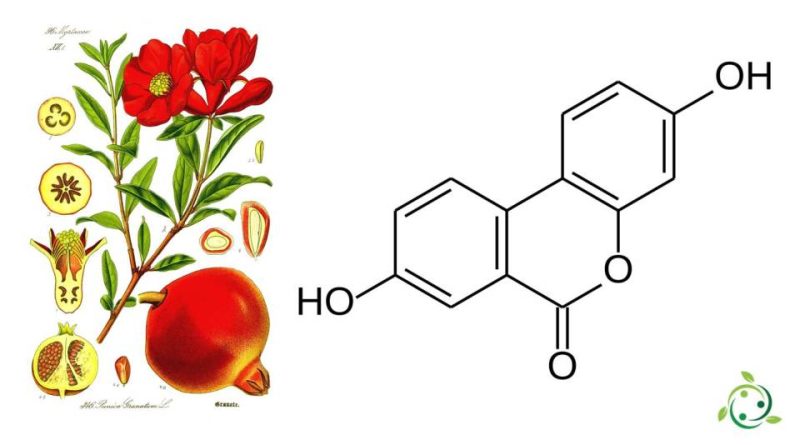 Urolithin A, whose term in the official IUPAC nomenclature is: 3,8-dihydroxy-6H-dibenzo [b, d] piran-6-one, also known by the acronym of Uro-A, is a substance that originates from the transformation metabolism of ellagitannins by intestinal bacteria.
Urolithin A has a brute or molecular formula: C13H8O4 and belongs to the class of organic compounds known as benzocoumarins or dibenzo-α-pyrones. These are polycyclic aromatic compounds containing a 1-benzopyran moiety with a ketone group in the C2 (1-benzopyran-2-one) carbon atom.
Its precursors – ellagic and ellagitannin acids – are ubiquitous in nature, including some edible plants, such as pomegranates, strawberries, raspberries, walnuts, etc.
The main sources are: pomegranates, walnuts, some berries (raspberries, strawberries, blackberries, blackberries), tea, muscat grapes, many tropical fruits and wines aged in oak.
However urolithin A is not present in any food source but its bioavailability depends mainly on the composition of the bacterial microflora capable of converting ellagitannins into urolithins
The ellagitannins are thus hydrolyzed in the intestine to release ellagic acid, which is further transformed by the intestinal microflora into urolithins through the loss of one of its two lactones and the subsequent removal of hydroxyl groups.

Biochemistry –
Since the 2000s, urolithin A has been the subject of preliminary studies on its possible biological effects.
Among others, a group of researchers from the Federal Polytechnic of Lausanne (EPFL), who carried out studies whose results have just been published in Nature Medicine, are interested in the substance.
In the laboratory, urolithin A was administered to worms of the Caenorhabiditis elegans type, model organisms on which the test of substances with presumed anti-aging effects is often conducted in the first instance because by living shortly (8-10 days), any results. In this case, the worms lived on average 45 percent longer than normal.
A result that led to experiment with the compound on mice: “elderly” animals, about two years old, showed a surprising recovery of strength and endurance, managing to run 42 percent longer than their companions of the same age who they had not received a diet enriched with the substance.
The specific effect of urolithin A would be precisely on muscle function. According to the researchers, the compound promotes the elimination of damaged mitochondria from muscle cells (mitochondria are the power plants where cell energy is produced), a process called mitophagy.
This process, which takes place efficiently in young cells, decreases with age, and would be the main reason why muscles lose strength as we age. According to the authors of the study, the compound contained in the pomegranate would help make mitophagy efficient again, causing decay to regress.

Contraindications –
In vivo studies did not determine any specific toxicity or adverse effects following dietary intake of urolithin A. Safety studies in elderly humans indicated that urolithin A was well tolerated.
In 2018, the U.S. Food and Drug Administration listed urolithin A as a safe ingredient for food or dietary supplements with a content of between 250 mg and one gram per serving.