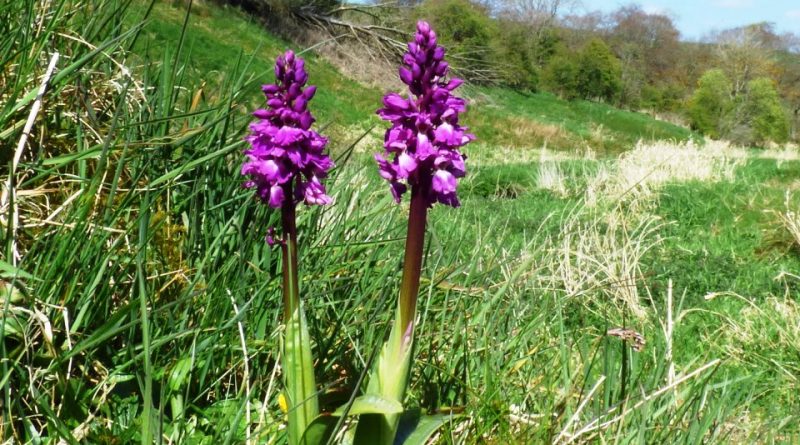 Geographic Distribution and Habitat –
The Early Purple Orchis is a plant with Euro-Caucasian diffusion and present in Europe, from Portugal to the Caucasus, in North Africa and in the Middle East, up to Iran.
In Italy it is present throughout the national territory except in Puglia; in Sardinia, as mentioned, the subspecies O. m is present. ichnusae.
Its habitat is that of lean meadows and mountain pastures, scrubs and chestnut groves, in full sun or in shaded areas, where it is present from sea level to 2500 meters above sea level. 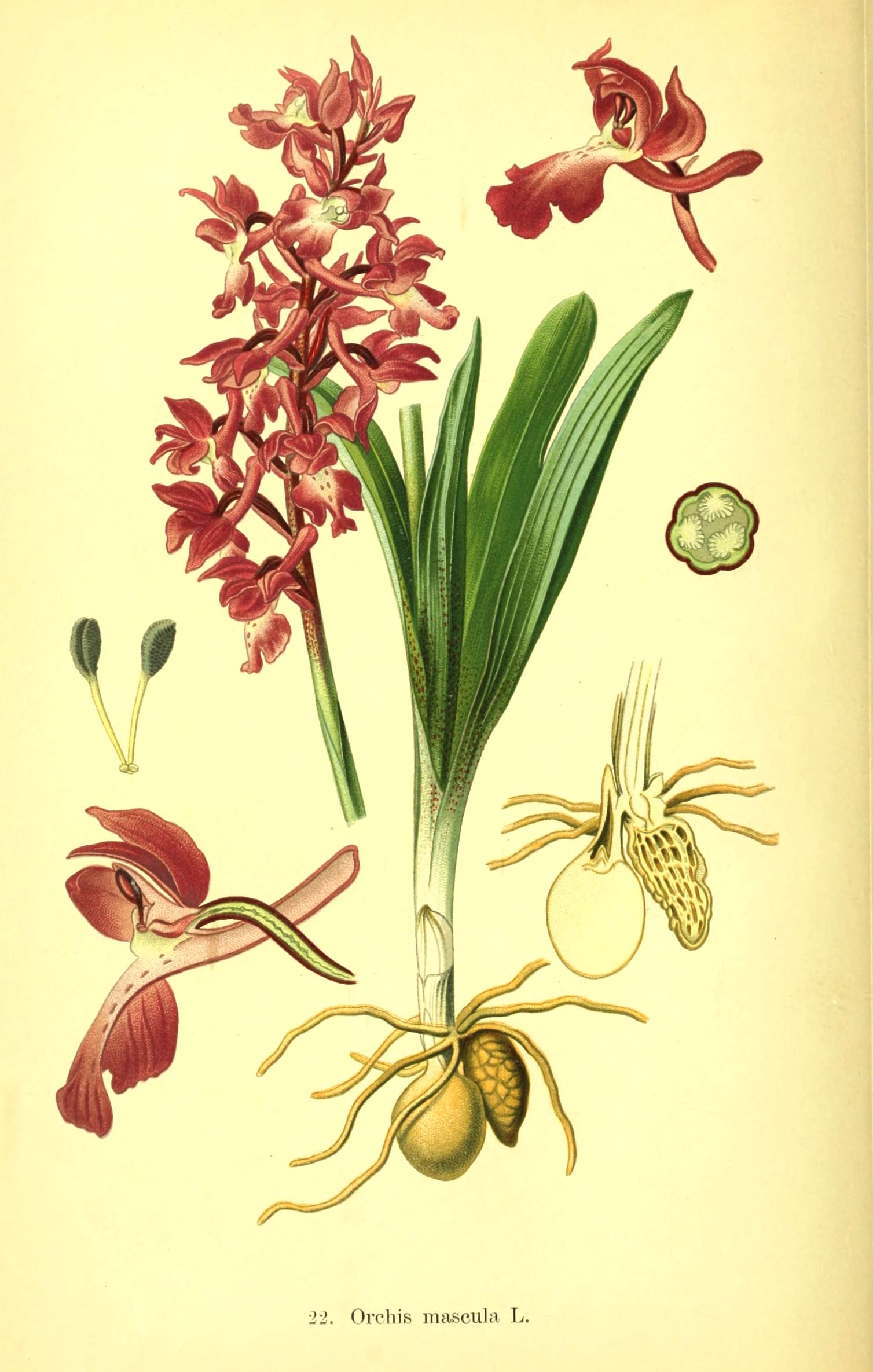 Description –
The Early Purple Orchis is a herbaceous plant with a stem up to 50-60 cm tall, green at the base and purple towards the apex.
It has a root system consisting of two round or ellipsoid rhizotubes.
The leaves are grouped at the base of the stem, oblong-lanceolate, green in color, sometimes with red-brownish speckles.
The flowers vary in color from pink to violet and grouped in cylindrical and dense inflorescences. The lateral sepals are ovate-lanceolate, erect, with the median together with the smaller petals covering the gynostemium in a helmet. The labellum is trilobed, convex in the longitudinal direction, with a median lobe longer than the lateral ones, with a crenulated margin and with the basal part lighter and dotted with brown-purple spots. The spur is cylindrical or claviform, horizontal or ascending. The gynostemium is short, with reddish-green anthers and dark green pollen masses.
The antesis is between April and June.

Cultivation –
Orchis mascula is a plant that has long been a bulb harvested in its natural state for local use as a food and medicine.
The plant grows in most soils, but prefers moist, deep substrates with decaying leaves.
It grows well in full sun or partial shade.
Orchids are, in general, shallow-rooted plants that live in low-fertility, well-drained soils. Their symbiotic relationship with some fungi in the soil allows them to obtain sufficient nutrients and to be able to compete successfully with other plants. They do not tolerate the use of fungicides as these can damage the symbiotic fungus and thus kill the orchid.
The symbiotic relationship can be an obstacle to cultivation and, furthermore, the transplant can damage the relationship and the plants may even thrive for a few years and then disappear.
Cultivated plants are very susceptible to the presence of snails.
As far as propagation is concerned, bulbs can be used, which must be taken while the plant is dormant, preferably in autumn. Bulbs can also be transplanted with a large ball of earth around the roots.
They can be propagated by seed knowing that it has a tiny embryo surrounded by a single layer of protective cells. It contains very few food reserves and depends on a symbiotic relationship with a species of soil fungus. The fungal hyphae invade the seed and enter the cells of the embryo. The orchid soon begins to digest the fungal tissue and this serves as food for the plant until it is able to obtain nutrients from the decaying material in the soil.
For planting it is best to use some of the soil that grows around the established plants to introduce the fungus, or to sow the seed around a plant of the same species and let the seedlings grow until they are large enough to be transplanted.
It is also possible to divide the rhizotubers when the flowers wither.
This species produces a new tuber towards the end of its growing season. If this is removed from the plant while its flowers are fading, the shock to the plant can stimulate the formation of new tubers. The tuber should be treated as dormant, while the remaining plant should be encouraged to continue growing to give it time to produce new tubers.
Division can also be done when the plant has a fully developed rosette of leaves but before it blooms.
The plant that will form will then be removed from the old tuber from which it arose and is potted, the cut is made towards the lower part of the stem but leaving one or two roots still attached to the old tuber.

Customs and Traditions –
Orchis mascula is a plant that was once used for both food and medicinal purposes but also for other uses.
Edible use involves the use of cooked roots.
From the plant a fine white to yellowish white powder is obtained which is obtained by drying the tuber and grinding it into powder.
This powder is a starch-like substance with a sweetish taste and a slightly unpleasant odor. It is said to be very nutritious and is made into a drink or can be added to cereals and used to make bread etc.
About 30 grams of this powder is said to be enough to sustain a person for a day.
This powder, called salep, is very nourishing, astringent, expectorant and demulcent.
For medicinal use it has been used as a diet of particular value for children and convalescents, being boiled with water and flavored.
It is rich in mucilage, forms a soothing and demulcent gelatin that is used in the treatment of irritation of the gastrointestinal tract.
One part of salep to fifty parts of water is enough to make a jelly.
From an ecological point of view, Orchis mascula is a plant devoid of nectar which however attracts pollinating insects (hymenoptera of the genera Apis, Bombus, Eucera, Andrena, Xylocopa and sometimes even beetles) thanks to the appearance of its flower which recalls that of other nectar species.

Preparation Method –
The tubers of the Early Purple Orchis are used for both food and medicinal purposes. These can be consumed cooked or after having reduced them to powder even for medicinal purposes.
The tuber, from which the salep is prepared, must be harvested when the plant dies after flowering and fruit set.