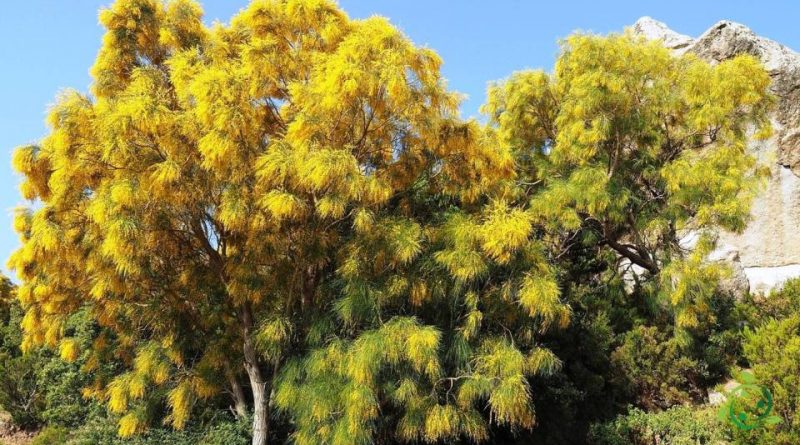 How the Etna broom is grown

The Etna broom (Genista aetnensis (Raf. Ex Biv.) DC.) Is a plant of the Fabaceae family endemic to Sicily (eastern side of Etna) and Sardinia (eastern side).
This plant grows spontaneously in Sicily, endemic to the hilly and mountain slopes of Etna, sometimes in association with Adenocarpus bivonii, and in eastern Sardinia.
The broom of Etna was introduced, for reforestation, on Vesuvius and on the Peloritani mountains.
Until the creation of the Etna Park it was used to obtain coal. In fact, it is possible to notice the typical growth of coppice plants in some areas.
Its reproductive structures are flowers that appear in late spring, yellow-golden in color and arranged in dense elongated racemes. The fruit is a brown, hairless, sickle-shaped legume, containing 2-4 small lenticular seeds.

Cultivation –
Genista aetnensis is a plant that prefers poor and dry soils.
It has an extraordinary ability to adapt and thrive in truly extreme substrate conditions. A typical soil on which it develops is the volcanic one of the newly formed lava fields.
Being an endemic species, its distribution range is extremely limited geographically, which does not prevent it from being cultivated elsewhere.
From the altimetric point of view it grows between 100 and 2000 meters above sea level, and seems to prefer the eastern slopes of the slopes on which it develops. Its typical habitat is that of bushes and scrubs on calcareous or crystalline soils as in Sardinia, or lava as in Sicily.
This plant therefore requires full sun exposure and is fully rustic. However, it does not tolerate salinity.
The Etna broom propagates by seed. The seeds must be harvested at the end of autumn, around November – December, starting from plants that are already fully developed and in excellent vegetative conditions. The already dried legumes are collected from the plant and the 2 – 4 seeds are extracted and stored dry throughout the winter season.
Sowing should be done in April, possibly preceded by mechanical scarification with sandpaper or, but usually not recommended, by chemical scarification (30 minutes in sulfuric acid).
Alternatively, you can proceed by cutting or grafting.
This plant reaches its final size in a period ranging from 10 to 20 years.
As for pruning, being an endemic species, it is advisable to let it grow spontaneously in order not to lose its typical characteristics even if in the juvenile period it can be pruned very sparingly, since it does not tolerate drastic pruning.
The Etna broom, if grown in this way, is an extremely beautiful plant, with a very abundant flowering, fragrant and showy, suitable for small and medium-sized gardens as isolated specimens or on the bottom of English borders.
It also attracts bees and pollinating insects and is therefore ideal in natural gardens where it helps to maintain the biodiversity of the microfauna high with a consequent improvement in the ecological balance and fruit setting of other fruits.

Uses –
Genista aetnensis was introduced in the 1950s, for forestry purposes, on the Peloritani Mountains and Vesuvius, but without great success. However, it is a very suitable ornamental plant for difficult and not very evolved soils, in environments not influenced by saltiness.