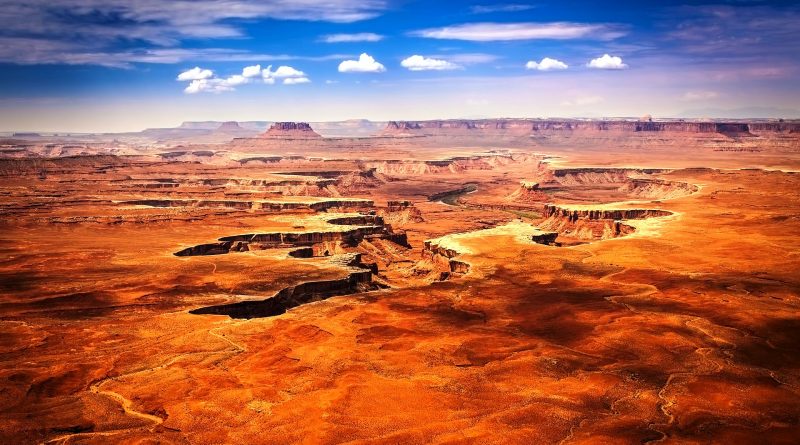 Canyonlands National Park, whose WDPA Code is: 982 is a protected area with an area of ​​1,366.21 km² of Utah in the United States of America.
This park was established on September 12, 1964 and is managed, like other parks in the United States, by the National Park Service.
Canyonlands National Park includes some of the landscapes characterized by the erosion of the Colorado River, upstream of Lake Powell, in a semi-desert environment.

Geography –
Since Canyonlands National Park was established it has been famous for its stunning red rock formations, and for being the breathtaking setting for so many western films. Crossed by the Colorado and Green Rivers, Canyonlands Park is divided respectively into three large areas called Island in the Sky (“Island in the Sky”), The Needles (“The Tips”) and The Maze “The Labyrinth”.
Canyonlands National Park is undoubtedly one of the wildest, boundless and most remote parks in the whole of the United States with some areas that are almost completely unexplored and that without proper preparation and organization certainly cannot be visited.
Among these areas we mention:
– Island in the Sky; it extends north of the two rivers Colorado and Green River, and is a sort of majestic plateau from which the other two areas can be seen in the distance. This is the most easily accessible and visited area, thanks also to paved roads, fantastic overlooks and simple hiking trails. The Visitor Center is open every day from 9 to 16 and inside you will find lots of information to better plan your trip. Among the simpler excursions we recommend that to discover the beautiful Mesa Arch of about 800 meters, simple and effective, or the panoramic Gran View Point that will take you away about 1 hour and a half covering a total (round trip) about 3 km . For Murphy Point, another spectacular route, it is about 6 km.
– The Needles; is an area located east of the meeting point between the Green and Colorado rivers, and is known for its orange pinnacles interspersed with white lines. The area also includes arches, canyons and ruins with early Native American rock inscriptions.
– The Maze; this area, characterized by labyrinth-shaped canyons, with high rocks and multicolored sandy fins, and located to the west of the two rivers. This is the most inaccessible and remote area accessible through the Hans Flat Ranger Station, 130 kilometers south of Green River. At Canyonlands Park it is possible to indulge in various activities such as cycling, hiking in the mountains both on foot and by jeep, and descents along the river with rubber boats. In addition to all this, there are travel agencies that offer tourists the opportunity to live on a ranch, savoring the adventure of the wild west. Plus, for first-time travelers, a great way to get in touch with the towering locations of Canyonlands is in the company of expert guides. In Moab, the town closest to the park, you can rent 4 × 4 Jeeps or take part in visits with expert guides. Lastly, to the northeast of Canyonlands is Dead Horse State Park, a small park that offers great views. 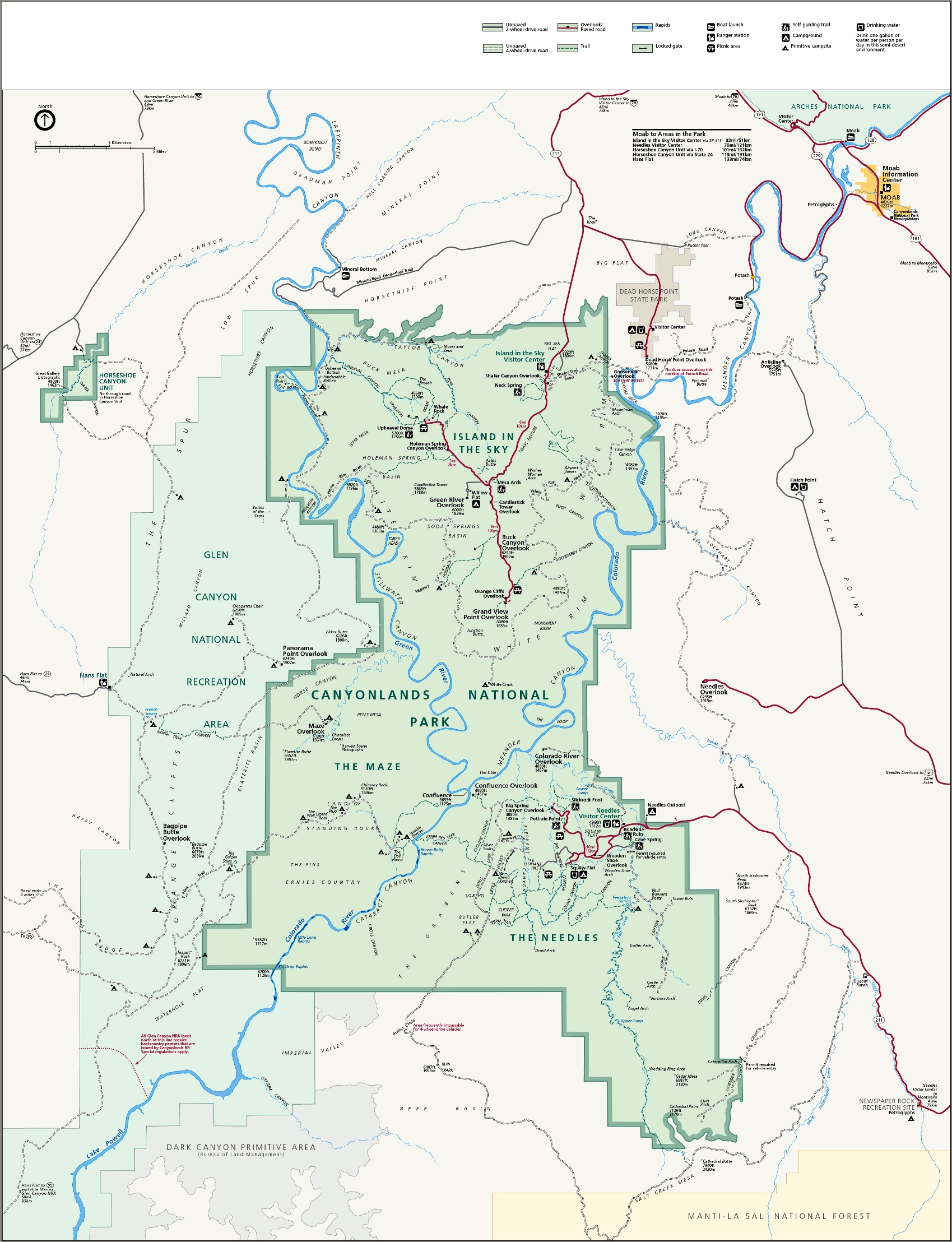 Geology –
Canyonlands National Park is a showcase of geological eras. In each of the park’s districts, visitors can see the dramatic effects of millions of years of erosion on a sedimentary rock landscape.
Most of the rock found in the Canyonlands today came from distant mountain ranges such as the ancestral Rocky Mountains and even the Appalachians. For millions of years, the rock was broken down and carried here by wind and water, creating deposits that eventually became distinct layers of sedimentary rock.
Some layers have been deposited by rivers, their sandy channels surrounded by swamps and lakes. The wind carried some of the thickest layers, creating vast sand deserts or dune fields on the shores of an ancient sea.
The accumulation of rock has created a geological layer cake, with most of the material hidden beneath the surface. There were no canyons: just vast plains that sloped gently into the distance.
Many of the exposed rocks in Canyonlands have been deposited near sea level. Today, the average elevation here is over 1,500 meters above sea level – a significant lift.
The Canyonlands are part of a region called the “Colorado Plateau”, an area that rises above the surrounding country. About 20 million years ago, movement in the earth’s crust began to alter the landscape of North America, building modern landforms such as the Rocky Mountains, the Nevada Basin and Range, and the Colorado Plateau. Some geologists believe that the plateau rose up to 3,000 meters since the start of the uplift.
These movements also created cracks where molten rock rose from the depths of the Earth. In some places, it cooled before reaching the surface, creating pockets of harder igneous rock within the surrounding sedimentary layers. Eventually, erosion exposed these harder deposits, creating the isolated mountain ranges visible from Canyonlands: Sals, Henrys and Abajos.
Today’s landscape is that of erosion. As this area gradually rose, rivers that once deposited sediment on the lowlands began to remove it from the emerging plateau. The Green and Colorado Rivers began to etch the pie of the geologic layer, exposing buried sediments and creating Canyonlands canyons.
However, rivers are not the only erosion force. Summer storms bring heavy rains that patrol the landscape. Some layers erode more easily than others. As softer rock dissolves, layers of harder rock form exposed shelves, giving the canyon walls their stepped appearance. Occasionally, a harder rock slab will protect a weaker layer beneath it, creating balanced rocks and towers. Great examples of this can be seen in Monument Basin on Island in the Sky and Land of Standing Rocks in The Maze.
The water also penetrates the crevices of the rock, eroding and widening them until only thin spiers remain, such as those found in The Needles.
As the erosion work continues, today’s geological manifestations will eventually disappear, giving way to future wonders.

Flora –
Many visitors are surprised by the amount of vegetation present in Canyonlands National Park.
Plants are critical components of all ecosystems and Canyonlands is no exception. Plants capture particulate matter in the air, filter gaseous pollutants, convert carbon dioxide into oxygen, provide animal habitat and have many raw materials useful to humans.
Visitors encounter a variety of plant species, from tiny lichens clinging to the sandstone to the majestic poplars that grow at the bottom of the canyons. Wildflowers bloom in spring, cacti appear between the gnarled crust of organic soil, and clustered grasses grow in the open countryside. These various communities and ecosystems allow scientists to research how plants adapt to a changing world.
Many adaptations in the leaves and roots allow the plants to survive the extreme temperatures and dryness found in Canyonlands. These adaptations are grouped into three categories: drought fugitives, drought resisters, and drought evaders.
Drought fugitives are plants that use favorable growing conditions when they exist. These plants are generally annuals that only grow when enough water is available. The seeds can lie dormant for years if conditions are not favorable. Spring annual wildflowers are fugitive. They sprout after the winter and spring rains, and sometimes again after the late summer rains.
Drought resistors are typically perennial. Many have small, thorny leaves that reduce the impact of solar radiation, and some may drop the leaves if water is not available. Thorns and hairy leaves work to reduce exposure to drafts and solar radiation, limiting the amount of water lost through evaporation. Cacti, yuccas and mosses are examples of drought resistance. Yuccas have extensive fictitious roots that are capable of using water beyond the reach of other plants. Moss, a plant not commonly associated with deserts, thrives because it can tolerate complete dehydration – when the rains finally return, the mosses immediately green.
Another extreme adaptation is found in Utah juniper, one of the most common trees in the Southwest. During drought, junipers can self-prune, diverting liquids from one or more branches to store enough water for the tree to survive.
Drought evaders, the last group, survive in riparian areas where water is abundant. Monkey flower, columbine, and maidenhair fern are found in well-shaded alcoves near seepage or dripping springs. Black poplars and willows require a lot of water and grow only along river corridors and intermittent streams where their roots can easily reach the water table.

Fauna –
Although the natural stillness of Canyonlands National Park often creates the impression of lifelessness, many animals live here. Birds, lizards, and some rodents are seen more frequently, although seasons and weather play an important role in determining which animals are active.
Desert animals have a variety of adaptations to cope with the temperature and humidity stresses found in Canyonlands. Most desert animals are nocturnal, being most active at night. This can be an adaptation to both predation and hot summer daytime temperatures. Mostly nocturnal animals include kangaroo rats, wood rats (also called pack rats) and most other small desert rodents, skunks, ring tails, foxes, bobcats, mountain lions, bats, and owls.
Animals that are most active at sunrise and sunset are called “crepuscular”. These hours of the day are cooler than midday. The penumbra makes the prey less visible, but the visibility is sufficient to identify the food. Some animals are crepuscular mainly because their prey is crepuscular. Crepuscular animals include mule deer, coyotes, porcupines, desert cottontail, black-tailed hares, and many songbirds.
Some desert animals are active mainly during the day, or “diurnal”. These include rock squirrels, antelope squirrels, squirrels, lizards, snakes, hawks, and eagles. Many animals have a temperature range in which they are active, so change their active hours of the day depending on the season. Snakes and lizards go into an inactive state of torpor during the winter, are active during the day during the late spring and early autumn, and become crepuscular during the summer heat. Many insects alter their uptime. For example, mosquitoes can stay outside all night, all day or at sunrise or sunset, depending on the temperature.