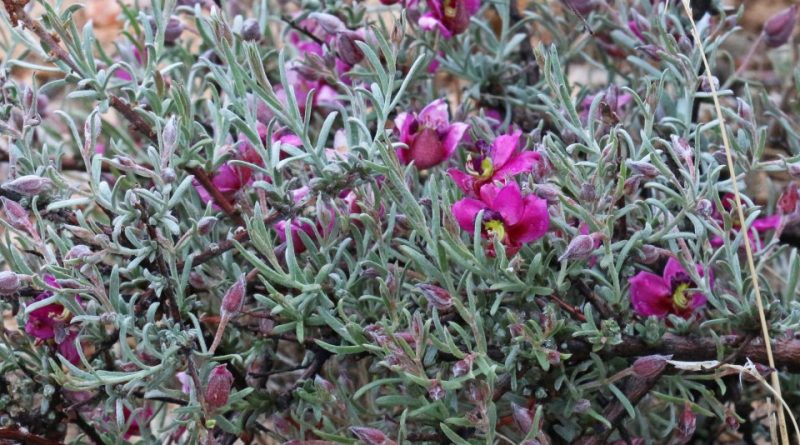 Etymology –
The term Krameria of the genus was dedicated by Linnaeus to the Austro-Hungarian physician and botanist János György Kramer (Johann Georg Heinrich Kramer, ~ 1688-1744).
The sepcific epithet lappacea comes from lappa (Latin name of lappola, in Virgil and Pliny; according to some the Latin name derives from the Celtic llap mano because the flower sticks to anything that touches it, as a hand would; according to others it derives from the Greek λαβεῑν labein stick): reminiscent of the lappola.

Geographic Distribution and Habitat –
The para rhatany is a plant native to the Andes, where it grows at a height of 900 – 1200 meters (but which can be found at higher altitudes), in dry, sandy or gravelly soils. It is found in the Andean areas of Peru, Bolivia, Colombia, Ecuador, Chile, and Brazil, and has also been observed in Central America and Mexico.
Its habitat is that of arid peaks up to 1200 meters above sea level. 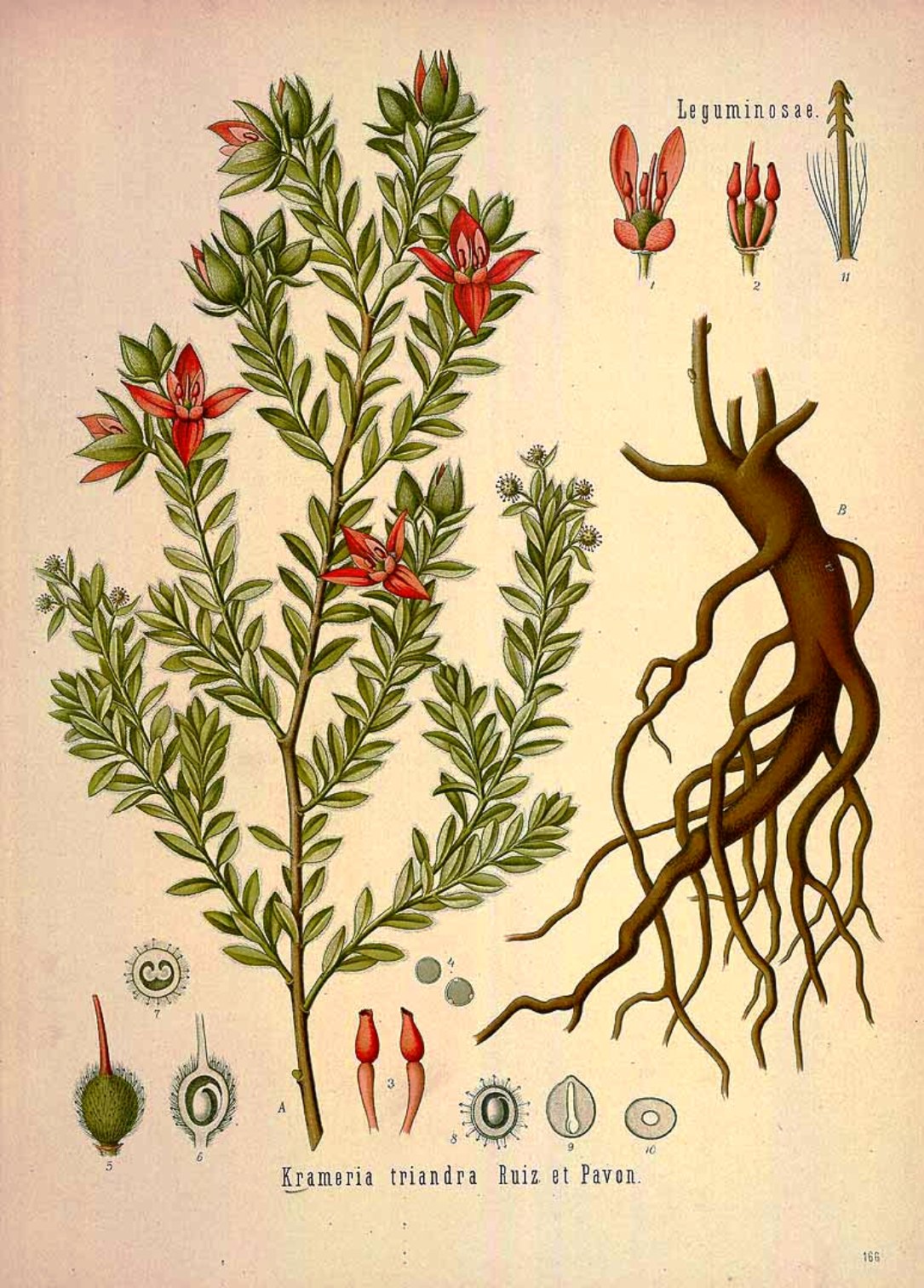 Description –
Krameria lappacea is a shrub with a very branched, horizontal and not very long root.
It has a thick, reddish-brown bark and its interior is red.
The stem is cylindrical and branched, with 50-80 cm long branches; which in youth are whitish and hairy and which in adulthood become dark and naked.
The leaves are alternate, sessile, oblong-ovate with a short petiole.
The flower is red and large with a calyx with four sepals and a corolla with four petals. The fruit is a dry, hairy, stinged drupe with one or two edible seeds inside.

Cultivation –
Krameria lappacea is a slow-growing plant species that grows in the semi-arid areas of the Andean region.
It is a plant that grows spontaneously and prefers well-drained, sandy or stony soil and a sunny position.
The plant can be propagated by seed.
However, it should be remembered that the cultivation of the plant was attempted, but it seems to have ended with poor results.

Customs and Traditions –
Krameria lappacea is a plant used as a very popular traditional herbal remedy in South America, where the root is harvested commercially in nature, mainly in Peru, and the roots are sold in local markets and also exported to Europe and America for medicinal use and as dye plant.
The plant can be used for food purposes; the extracts of the root have been used to improve the color, richness and astringency of red wine and was used until a few years ago to give body to Port wine.
The root is a strongly astringent, antimicrobial and tonic herb that controls bleeding; controls diarrhea and encourages healing.
It is particularly appreciated for the treatment of problems related to the gastrointestinal tract, in particular diarrhea and dysentery.
It is also taken internally to treat bleeding and excessive menstruation.
The root is also used for external use as a detergent, or in the form of a suppository or ointment, to treat vaginal discharge, hemorrhoids, chilblains, wounds, varicose veins and areas of capillary fragility prone to easy bruising.
It is a good mouthwash and gargle for treating bleeding and infected gums, mouth ulcers and sore throats and in powder form and added to proprietary oral hygiene blends.
There is also a red pigment in the root.
The active ingredients contained are: tannins, krameriatanin and rattanotanic acid. Deep red in color, it is commercially called ratania red. They react like catechetical tannins and have a structure similar to that of rubber. It also contains waxes, gums, sugars, lignin, catechic acid, calcium oxalate and starch.

Preparation Method –
The para rhatany has long been used for its medicinal properties and for its astringency due to its high tannin content; it is in fact a powerful astringent, used in the swelling of the lips, in the irritation and in the bleeding of the gingival mucosa.
Ratany is a herbal remedy that consists of the dried root of two Krameria species: Krameria lappacea and Krameria argentea.
It is used externally in the form of ointment in anal and mammary fissures.
The Peruvian Indians used to use the root of rhatany for the care and hygiene of the mouth. It is useful for mitigating inflammation of the mouth and pharynx and for strengthening the gums. It is advisable to rinse with the decoction filtrate.