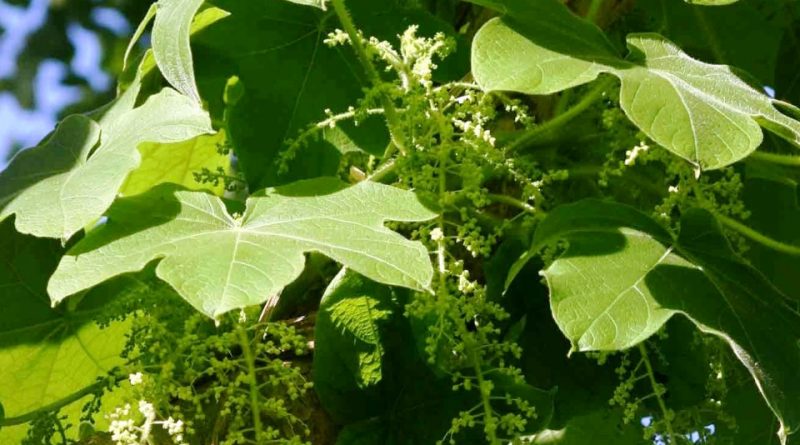 Etymology –
The term Jateorhiza comes from the Greek words iater, doctor, and rhiza, root, evidently in allusion to its healing virtues.
The specific palmata epithet comes from pálma palma, due to the shape of the leaves that resembles the palm of the hand.

Geographic Distribution and Habitat –
Jateorhiza palmata is a plant native to tropical eastern Africa and present in Kenya, Tanzania, Malawi, Mozambique and Zimbabwe.
Its habitat is that of the rainforest, a marginal forest; from sea level to altitudes of 1,500 meters.

Description –
Jateorhiza palmata is a tall, dioecious perennial vine that often reaches the treetops.
It has a tuberous root, large and fleshy, about 3-8 centimeters in diameter with a thick bark. The cross section is yellowish, externally greyish brown. The taste is very bitter.
The annual stems, one or two per root, are covered with hairs with glandular tips.
The leaves are large membranous, bright green, palmate, alternate and with a long petiole.
The flowers are insignificant and greenish white in color. The male flowers are grouped in panicles that are 30 centimeters long.
The fruit is a moon-shaped drupe.

Cultivation –
Jateorhiza palmata is a dioecious and climbing shrub that produces generally perennial woody stems from 2 to 5 meters in length that grow from a tuberous root.
In some areas, such as Mozambique, the stems can be annual.
The tuber is harvested in nature for local medicinal use.
The plant grows in its natural state but can be propagated by seed.

Customs and Traditions –
The root of Jateorhiza palmata has long been in use under the name of “kalumb” among the African tribes of Mozambique, who used it as a remedy for dysentery and other diseases.
Undoubtedly the drug was brought by them to the immediate knowledge of the Portuguese when they obtained possession in 1508. Through the influence of their traders, drug knowledge slowly spread among Europeans over the course of the 16th and 17th centuries.
The first certain information regarding the calumba root, however, dates back to the year 1671, when Franciscus Redi, 1626-1697, (538), born in Arezzo and doctor of the Duke of Tuscany, describing it under the name of calumba.
In 1695 the famous Leeuwenhoek (376), in his work “Arcana Naturae”, recorded some chemical experiments he had done with this root, which he calls radix indica, columba rays. He also introduced crystal illustrations seen in the study of this drug. Simultaneously with this physicist, J. C. Semmedus (592) (probably in 1689 or shortly before) mentions calumba in his writings as present among the drugs originating in India. This author’s work became more important in a later edition (1722).
Valmont-Bomare (656c) in the 1764 edition of his dictionary describes “calumbe” as the root of an unknown tree brought to us from India. He adds that in Bengal this root is considered specific in cases of colic, indigestion and against the effects of “mort-du-chien”, which is the ancient French name for colchicum.
However, only when the treatises on calumba root by Gaubius (257a), 1771, Cartheuser (129), 1773 and Percival (499), 1773 appeared in close succession, was there a very general spread of knowledge about this drug. In this regard it is perhaps interesting to note that in a previous translation (dated 1755) of Cartheuser’s root of Materia Medica calumba it was not found.
Thanks, in particular, to Percival’s recommendation, the drug quickly gained entry into European medicine, and since about 1776 traces of it can be found in many pharmacopoeias of European countries. However, the geographical and botanical origin of the calumba root still remained a mystery. The Portuguese, as already mentioned, having had the monopoly of trade in this article, seemed to have been careful not to reveal the origin of the drug and made it customary to bring it to India and then export it to Europe from India instead of African ports. . For this reason, for a long time, the general impression prevailed that the plant was native to India and that the capital of Ceylon (Colombo) gave its name to the drug.
By about 1770, however, there was a growing suspicion that calumba root was of African origin. In this sense Philibert Commerson, a French physician, collected a specimen of a certain plant that grew in the garden of M. Poivre in the Isle de France, which Lamarck in 1797 called Menispermum palmatum, stating that this menispermum (of which he described the male plant ) perhaps gave the root that is brought to us from India under the name of calombo or Columbus root. He adds, however, that “he appears to be from India”.
In 1805, marked progress was made in establishing its African origin. M. Fortin in that year brought the root of a male calumba plant from Mozambique to the city of Madras, where it was bred and cultivated by Dr. James Anderson. From this specimen Dr. Berry (63), in 1811, published a botanical description in the “Asian Researches”, in which he also gives certain information about the origin and uses in his native country. The specimen was later transported by him to the botanical gardens of Calcutta. De Candolle in 1818 named the plant Cocculus palmatus. However, the female plant was still unknown.
In 1825, Captain W. F. Owen brought a male and a female plant from Oibo, East Africa, to Mauritius, where it was grown and observed by Bojer. Finally, from this source, Sir W. J. Hooker (324) in 1830 was able to describe the entire plant, both male and female, under the name of Cocculus palmatus, Hooker.
Jateorhiza palmata contains isoquinoline alkaloids and is mainly used as a bitter tonic especially in cases of anorexia nervosa. It does not contain tannins, so it can be safely used in iron preparations for the treatment of anemia without the fear of precipitation resulting from in vitro interaction.
They are the roots that contain a series of medically active substances including the diterpenoids furanolactones columbin, palmarin and casmantine and several related glycosides including palmatosides A, G and the alkaloids protoberberine palmatin, jatrorrhizina, bisjatrorrhizina and colombamine. They also contain traces of the sapogenins diosgenin and cryptogenin. In addition, they contain about 1% of a greenish essential oil, consisting mainly of thymol, with a fragrance reminiscent of hay – older roots contain very little of the oil. The roots are rich in starch.
This plant, in its long history, has been used as a traditional medicinal use and has become very popular in Europe, where it has been particularly appreciated as a treatment for digestive problems for people with stomach problems.
Today its importance in the West has greatly diminished, but it is still sold and used in proprietary herbal blends.
The plant is grown in several countries as a medicinal plant.
The root is the source of folk medicine formerly named “radix calumbae” which was imported to Europe from Mozambique and Tanzania.
It was mainly used against dyspepsia and diarrhea.
Today the plant is still used in laxative herbal blends both in Europe and in herbal bitters in Italy and the United States.
Calumba has been shown to suppress the induction of adenocarcinomas in the colon by administering the carcinogen azoxymethane.

Preparation Method –
The root of Jateorhiza palmata is considered anthelmintic, antipyretic, bitter and tonic.
It is widely used as a treatment for diarrhea and dysentery; gastric irritability; vomiting during pregnancy.
Traditionally, it has been consumed as a treatment for snake bites, hernias and ruptures.
Root scrapings are applied to scarifications made in abscesses to make them mature.