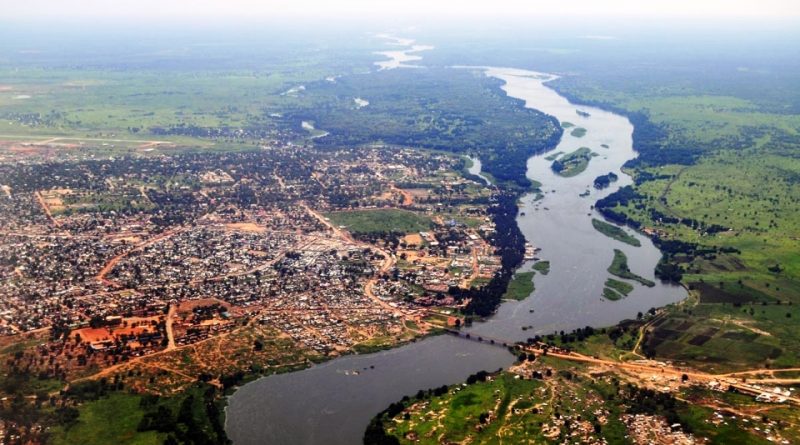 South Sudan or Southern Sudan is a state in central-eastern Africa.
This country has a population of 12,657,941 inhabitants (as of 2008) and its current capital is Juba, which is also its largest city, with a population of 372,410 inhabitants (as of 2011). In the future it is expected that the capital will be moved to the more central Ramciel.
From a border point of view, South Sudan borders Ethiopia to the east, Kenya to the southeast, Uganda to the south, the Democratic Republic of Congo to the southwest, the Central African Republic to the west and the Republic of Sudan to the north. It includes the vast swampy region of the Sudd, formed by the White Nile and known locally as the Bahr al Jabal.
The territories of modern South Sudan and the Republic of Sudan were both part of the kingdom of Egypt, under the dynasty of Muhammad Ali, later ruled as an Anglo-Egyptian condominium until Sudanese independence in 1956. After the First Civil War Sudanese, in 1972 the autonomous region of South Sudan was established, abolished in 1983. A second Sudanese civil war then developed, which ended with the Naivasha Agreement of 2005. In the same year, with the formation of an autonomous government of Sudan of the South the autonomy of the region was restored.
South Sudan became an independent state on 9 July 2011, following a referendum passed with 98.83% of the vote. It is a member country of the United Nations, the African Union and the Intergovernmental Authority for Development. In July 2012, South Sudan signed the Geneva Conventions.

Geography –
Southern Sudan is characterized by the vast plains and plateaus that are washed by the Nile River and its tributaries. This river system runs from south to north across the entire length of the central-eastern part of the country. In the heart of the country there is a clayey plain, the center of which is occupied by a huge marshy region known as Al-Sudd (the Sudd).
There are two very different highland regions. The Ironstone Plateau is located between the Nile-Congo watershed and the clayey plain; its landscape is characterized by the presence of inselbergs (isolated hills that suddenly rise from the plain). Along the border with Uganda there are impressive mountain ranges with peaks exceeding 3000 m. The Imatong Mountains culminate with Mount Kinyeti (3187m high), the highest point in South Sudan.
As mentioned, the Nile river system characterizes the geography of this country. All the streams and rivers of South Sudan flow into this great river or head towards it, giving a particular hydrographic connotation.
In 1978, construction began on the Jonglei (Junqalī) Canal, designed to bypass the Al-Sudd swamp and provide a well-defined straight channel to the Mountain Nile that would allow it to flow north to its confluence with the White Nile. Furthermore, it would have allowed the exploitation of the waters from the swamps of the Sudd for agricultural use. The project was suspended in 1983 due to the continuous interruptions caused by the civil war between north and south. After the 2005 Naivasha agreement, there was talk of a resumption of works on the canal, led by the Egyptian government and the Sudanese government of Khartoum, but the government of South Sudan (GoSS) hesitated to embrace the project and postponed any decision on of it until further studies have been performed; no decision has yet been taken on this matter since independence.
The southern plains consist of an alkaline soil formed as a result of the fragmentation of the clays. Al-Sudd clays settled in an area where drainage was impeded. 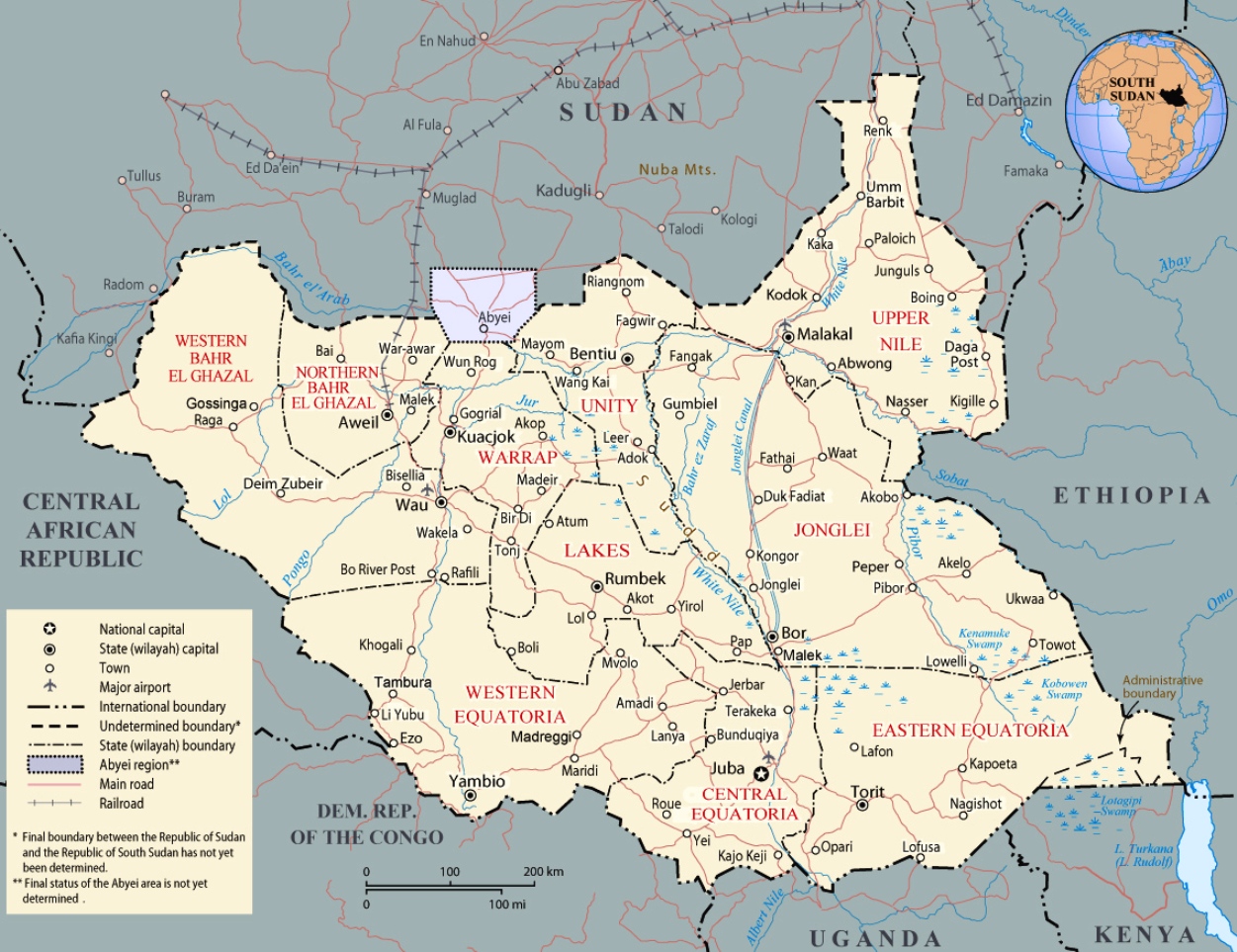 Climate –
South Sudan is characterized by a tropical climate with wet and dry seasons. The seasons are characterized by the oscillation, between north and south, of the atmospheric front between the southern moist air mass and the northern dry air mass. This phenomenon, more precisely, involves the seasonal migration and pulsation of the northern tropical continental air mass and the southern maritime continental air mass, separated from each other by the intertropical convergence zone. In winter, the northerly winds of the tropical air mass blow across the country towards the front, which then can be as far south as the Tropic of Capricorn. These winds are relatively cold and dry and generally do not carry rain. Beginning in April, the front begins to move north, and the moist southern air of the sea air mass is drawn into the area from the South Atlantic. Because of this, South Sudan has a rainy season, the length of which varies according to latitude and generally does not exceed eight to nine months of the year, which begins around April and can last until December at the latest.
The minimum annual temperatures in South Sudan are around 15-21 ° C in the center and north of the country, while in the peripheral areas they are slightly lower, between 10 and 15 ° C. The maximum annual temperatures of much of South Sudan generally vary between 26 and 32 ° C, although in some areas towards the north of the country they can vary between 32 and 37 ° C. The highest temperatures generally occur just before the rainy season.
As for the rainfall regime, South Sudan is characterized by rains that mostly fall during the summer months, with an amount that varies from one part of the country to another. Much of the country receives around 750-1000 mm of rain annually. Areas in the western part of the country receive slightly more, around 1000–1500 mm per year, while some areas in the northeastern and southeastern parts of the country receive less, around 500–750 mm. In some areas of the southeastern tip, less than 500 mm of rain per year fall.

Flora –
Unlike Sudan, most of the state’s territory is covered with tropical forests, swamps and meadows. There are many nature reserves that are home to large numbers of migratory species, such as Bandingilo National Park and Boma National Park. The main river is the White Nile. According to WWF, there are several ecoregions in South Sudan: the Eastern Sudanese Savannah (savannah), the North Congo Forest (tropical forest), the Sudd (swamps) and the East African Montane Forests (forests).
The main vegetation belts in South Sudan run in succession from north-west to south-east, more or less coinciding with the amount of rainfall. There is an arid savannah (prairie), a humid savannah, both with inland floodplains, and an area of ​​mountain vegetation.
Arid savannas are made up of grasses and thorny trees. Acacia trees dominate these savannas, and from one of these species, A. senegal, gum arabic is obtained, which has long been one of the main products exported from Sudan. The humid savannas of the south-central sector of the country are more lush, with rich pastures along the Nile that feed large numbers of domestic cattle. The scattered wooded areas that dot this belt gradually merge southwards with the rainforest proper, of which only a few fragments currently remain in the southernmost areas of the country.

Fauna –
Southern Sudan has an important wildlife including lions, leopards and cheetahs, as well as elephants, giraffes, zebras, buffaloes, hippos, warthogs and numerous varieties of antelope, such as gazelles, bullfights and harelopes. Chimpanzees, baboons and monkeys are widespread in the forests. Unfortunately, decades of civil war have seriously damaged some animal populations, such as those of elephants and hippos.
Birdlife includes ostriches, some species of partridge, cranes, storks, pelicans, plovers, weavers and shrieks.
Among the reptiles we find crocodiles and various lizards.
Insects are numerous. Mosquitoes infest river banks and swamps, and serut flies (large bloodsucking flies) are a plague during the wet months. The tsetse fly is generally present in wooded areas or near them or in the vegetation belts that develop along watercourses.