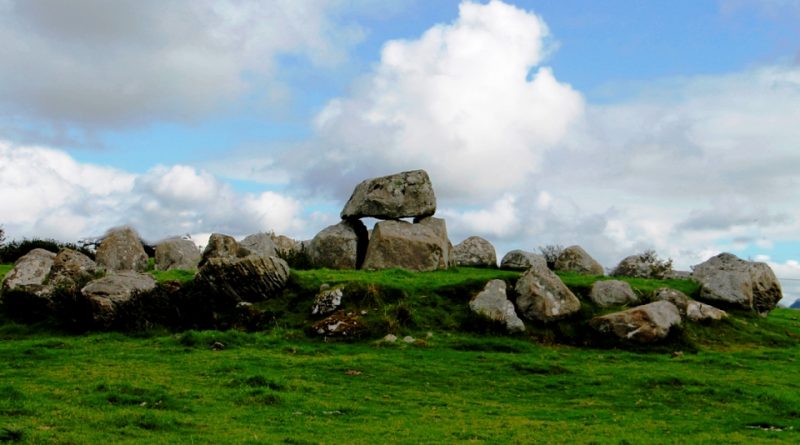 The Celts and agriculture

The Celts were a group of Indo-European peoples who, in the period of maximum splendor (V-III century BC), were settled in a large area of ​​Europe, ranging from the British Isles to the Danube basin, as well as some isolated settlements further south, the result of the expansion towards the Iberian, Italic and Anatolian peninsulas.
The Celts, united by ethnic and cultural origins, by sharing the same Indo-European linguistic background and by the same religious vision, always remained politically divided; among the various groups of Celtic populations the Britons, the Gauls, the Pannonians, the Celtiberians and the Galatians stand out, settled respectively in the British Isles, Gauls, Pannonia, Iberia and Anatolia.
The Celts were the bearers of an original and articulated culture, they were subject from the second century BC. to growing political, military and cultural pressure from two other Indo-European groups: the Germans, from the north, and the Romans, from the south. They were progressively subdued and assimilated, so much so that already in late antiquity the use of their languages ​​appeared in sharp decline and their retreat as an autonomous people is witnessed precisely by the marginalization of their language, soon confined only to the British Isles. In fact, there, after the great early medieval reshuffling, the historical heirs of the Celts emerged: the populations of Ireland and the western and northern fringes of Great Britain, speaking Brythonic or Goidelic languages, the two varieties of island Celtic languages.

Origins –
According to the majority of archaeologists and linguists, the Celts were the bearers of the culture of La Tène; culture developed during the Iron Age from the earlier Hallstatt culture. This identification makes it possible to identify the original homeland of the Celts in an area between the Upper Rhine (from Renos, a word of Celtic origin whose meaning is “sea”) and the sources of the Danube (from the Celtic Danuvius, whose meaning is “fast flowing”), between present-day southern Germany, eastern France and northern Switzerland: here the Protocelts consolidated themselves as a people, with their own language, linear evolution of a vast Indo-European continuum extended in central Europe since the beginning of the third millennium B.C.
According to some scholars it is believed that the first Celts colonized the British Isles already in the Chalcolithic period (culture of the bell jar).
In the area of ​​La Tène there has been a continuity in cultural evolution since the times of the culture of the urn fields (starting from the 13th century BC). At the beginning of the eighth century BC the culture of Hallstatt was established, the proto-Celtic civilization that already showed the first cultural characteristics that will later be typical of classical Celtic culture. The name derives from an important Austrian archaeological site about fifty kilometers from Salzburg. The Hallstatt Culture, with an agricultural base but dominated by a class of warriors, was part of a rather large commercial network that involved Greeks, Scythians and Etruscans. It is from this civilization of central-western Europe that, around the fifth century BC, the Celtic culture proper developed without interruption: in archaeological terminology, the Culture of La Tène. 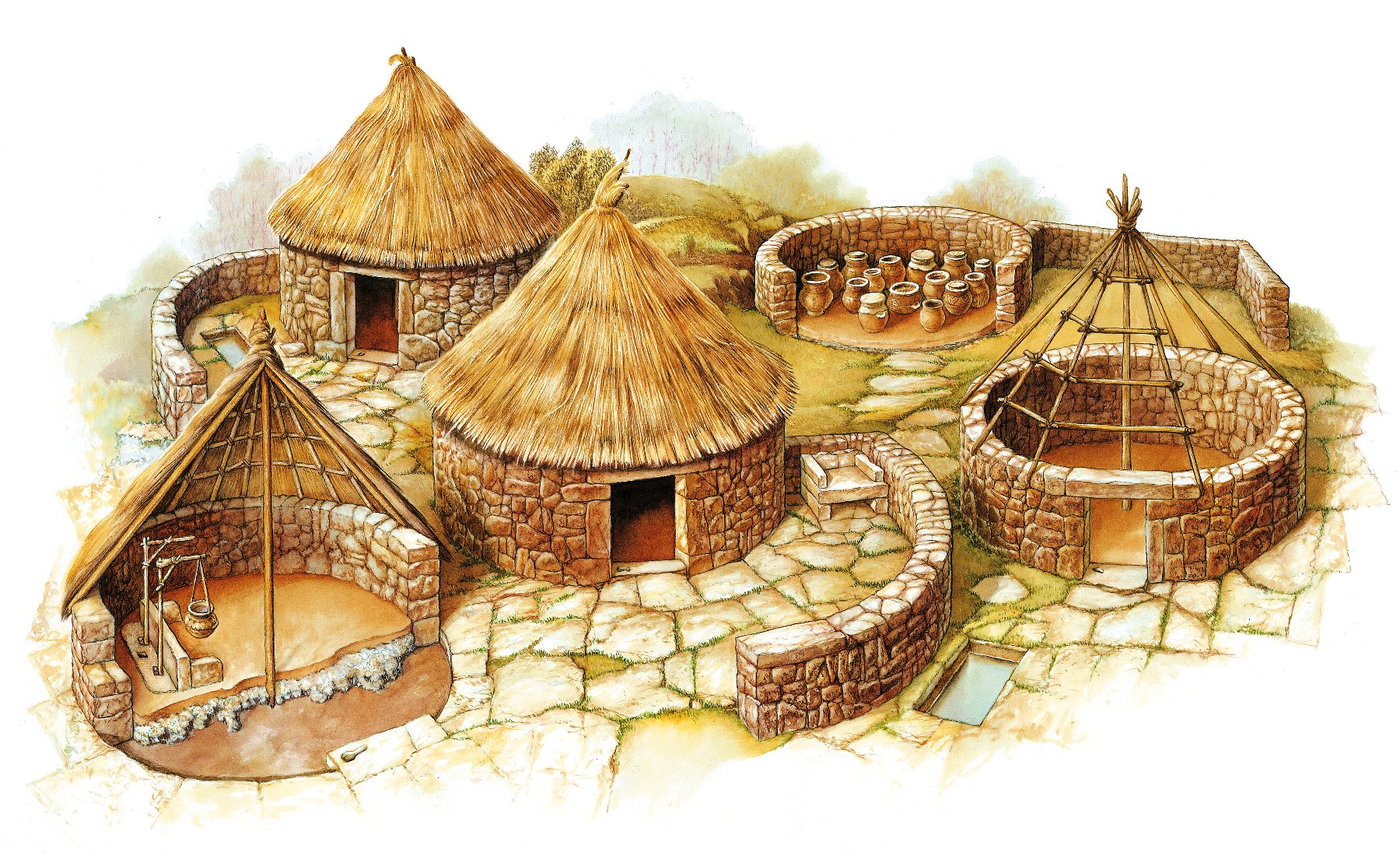 Agriculture –
The Celts were a people of skilled farmers; this population cultivated quadrangular fields, not very large: the average size was ten to fifteen ares, corresponding to what was possible to plow in a single day. The fields were bordered by hedges to protect them from the trampling of wild animals.
Cereal crops were the foundation of Celtic agriculture. Archaeological data attest that the Celts cultivated an ancient variety of small spelled (Triticum monococcum) as well as wheat, rye, oats, millet, perfectly suited to the soils of these regions with very high yields (up to three tons per hectare); but they also cultivated buckwheat (a cereal particularly suitable for poor soils and for a crop at altitude) and barley, used above all to produce a primitive form of beer, called in Gallic cervesia (according to the Latin transcription).
In the agriculture of the Celts, breeding played an important role. Livestock played a fundamental role in the nutrition of the Celtic people. Consequently, the rank of the various chieftains depended more on the number of cattle they owned than on the extent of their land used for cultivation. Small, long-horned cattle (Bos longifrons) were bred. Domestic pigs were much smaller in size than today’s boar or pigs, but their meat was particularly popular, especially at banquets. The archaeological finds of bone remains, found in their citadels, confirm that it was certainly the most consumed meat. Goats, on the other hand, were raised mainly for their milk; geese and chickens were also present in their villages.
It must be recognized, despite the claims of ancient authors (Strabo, Cicero or Tacitus) that the Celts together with the populations of central and western Europe were perfectly capable of practicing agriculture: their indisputable predispositions for war activities left more peaceful activities: the very nature of the lands they inhabited led them to consider differently from the Mediterranean countries the method, for example, of working the land, or even of basing on the resources available to them a economy a little different from the Mediterranean one, with original systems and techniques ignored or neglected elsewhere.
The Celts were, ultimately, a largely agricultural society, which had at their disposal two riches, elements of a landscape very different from those usual in the Mediterranean: the prairie and the forest.
The ingenuity of the Celts, when these populations lose their independence, one after the other, manifests itself in all fields and especially in agriculture, in which mechanical inventions must be ascribed to them, such as the large wheeled plow, a kind of adaptation of the cart, illustrated to us by Pliny, Naturalis Historia, XVIII, 171, 3: a curious harvesting machine, described by the same author (ibid., 296), with a box mounted on wheels and equipped with teeth, which detached the ears at the top of the stem.

Crafts and metallurgy –
The development of agriculture went hand in hand with the development and evolution of craftsmanship and metallurgists. As early as the 8th century BC, the ability to work iron allowed the Celts to make axes, scythes and other tools in order to clear out large-scale territories, previously occupied by impenetrable forests, and to work the land with ease. . The growing skill in metalworking also allowed the construction of new equipment, such as swords and spears, which made them militarily superior to their neighboring populations and enabled them to be able to move with relative ease, since they did not fear other peoples. Extracted in a spongy form, the iron was subjected to a first forge processing and distributed in ingots, weighing five to six kilograms and with a bipyramidal shape. In a later period, the ingots were replaced by long flat bars, ready to be worked into long swords; such bars were so popular that they were even used as money, along with copper and gold coins.