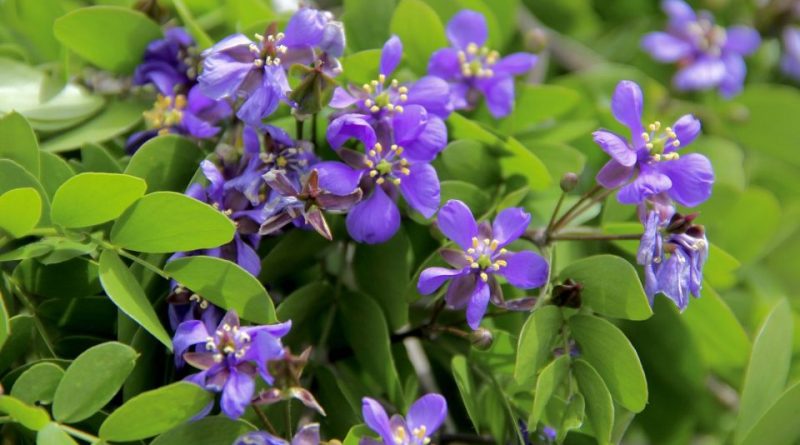 Etymology –
The term Guaiacum derives from the Spanish “guayaco” or “gayacan”, in turn derived from an indigenous name, “guaiac”.
The specific sanctum epithet comes from the Latin name lignum sanctum holy wood, which many botanists have attributed to this plant for its healthy medicinal effects, as a purifying agent.

Geographic Distribution and Habitat –
Holywood is a plant native to Central America and, more precisely: Bahamas, Belize, Costa Rica, Cuba, Dominican Republic, Guatemala, Haiti, Honduras, Mexico (Quintana Roo), Nicaragua, Panama, Puerto Rico, United States of ‘ America (Florida).
Once widespread also in the state of El Salvador where it is now extinct in its natural state.
It is a species considered close to threat and is rare throughout its range, above all due to the loss of its habitat and in some countries of the cutting to obtain wood and medicines. The species is included in the Appendix II of CITES and its trade is subject to control.
Its habitat is that of humid tropical lowland areas, where it is found at altitudes of up to 700 meters. 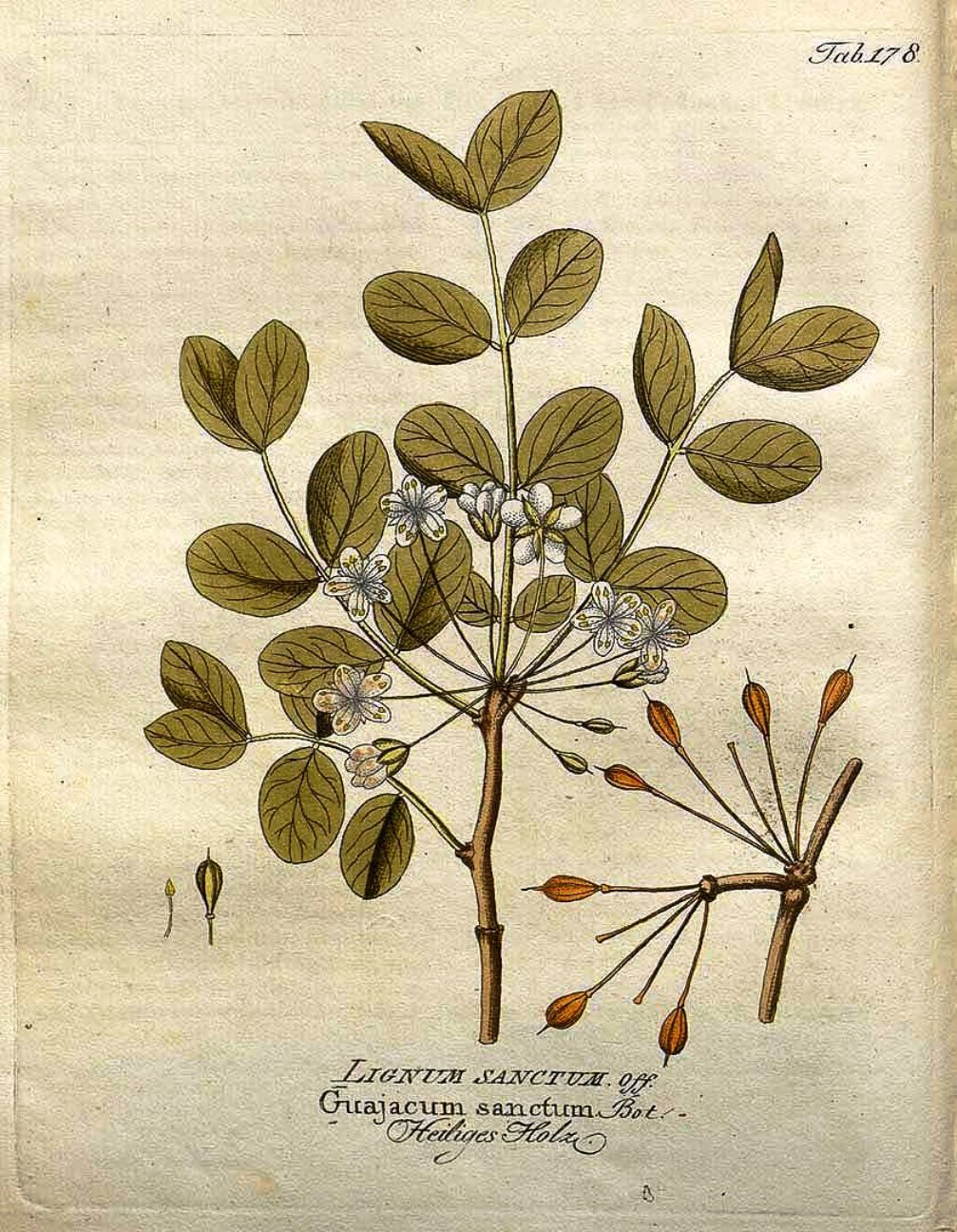 Description –
Guaiacum sanctum is a small, slow-growing evergreen tree that reaches 12m in height.
The trunk, which can reach 50 cm in diameter, is usually multiple.
The leaves are composed of leaflets 2.5–3 cm long and 2 cm wide.
The flowers are blue, with five petals and five sepals.
The anthesis occurs abundantly in the spring period.
The fruits are yellow, dehiscent, with a red pulp, inside which there are black seeds.

Cultivation –
Guaiacum sanctum is a plant whose natural populations have decreased due to indiscriminate harvesting and removal of natural vegetation for agricultural purposes or for the development of the tourism industry. For this reason the plant is classified as ‘in danger of extinction’ on the IUCN Red List of Threatened Species (2011).
This plant grows best in areas where annual daytime temperatures are between 22 and 28 ° C, but can tolerate 20 – 34 ° C, while it can’t stand temperatures of 1 ° C or lower.
It prefers average annual rainfall between 700 and 1,500 mm, but tolerates between 500 and 2,000 mm.
It can be grown in full sun or partial shade on a wide variety of soils, including alkaline ones.
The plants easily tolerate wet or dry soil, wind and salt, making it an ideal choice especially for plantations by the sea.
It grows well in shallow soils, especially in limestone areas, low well-drained areas, low hills subject to hot, dry winds and limestone rocky regions, where it prefers a soil with a pH between 5 and 7.5, tolerating 4.5 – 8.
Young trees start flowering when they are around 6-8 years old.
As far as propagation is concerned, this is done by seed.
The seed must be planted as soon as it is ripe; it is advisable to soak the seeds in running water (at 20 ° C) for 24 hours before sowing, which improves germination.
The seed is sown to a depth of 1 cm in containers of sandy loam. Germination begins 6 – 8 days after sowing and ends in 16 – 20 days.
Fresh seeds have a germination capacity of 40-60% in the nursery.
When the seedlings are 6 cm high, they are transferred to nursery bags. The seedlings are ready for transplanting 1 year after sowing, when they reach 30 – 40 cm in height.
The seeds can be stored for 1 month at 5 – 8 ° C. They lose vitality in less than 1 month if stored at room temperature and humidity.
To find the seeds, the fruits must be collected from the ground very early in the morning to avoid predation of the seeds by rodents. The fruits are placed on the ground and dried for 7 days in the shade; subsequently the pericarp of the fruit is removed with running water to extract the seeds. The seeds are then dried in the shade and stored in airtight containers.

Customs and Traditions –
This plant, although considered less useful than Guaiacum Officinale, both wood and resin are used in medicine in much the same way.
Wood, in particular, is used as a mild laxative and diuretic. For tonsillitis it is given as a powder. It is particularly useful for the treatment of rheumatoid arthritis, even in cases of chronic rheumatism and gout, where it relieves pain and inflammation between attacks and can decrease their recurrence if doses are continued. It acts as an acrid stimulant, increasing body heat and promoting circulation. When the decoction is taken warm and the body is kept warm, it acts as a diaphoretic, and when cold it works as a diuretic. It is also widely used for the treatment of secondary syphilis, skin and scrofula diseases.
Resins obtained from wood, bark, leaves and flowers are used in some pharmaceutical preparations.
The resin obtained from the heartwood is diuretic and slightly laxative.
Among other uses, a brown to reddish-brown resin is obtained from heartwood. It is used to make small objects where strength and heaviness are required.
The resin contains guaiaconic acid, guaiaretic acid, vanillin and guaiac yellow.
The resin is obtained by drilling a log longitudinally, then heating it in an inclined position. This causes the resin to melt and flow from the trunk.
The wood can also be cut and then boiled in water, which causes the resin to float to the surface.
The leaves are sometimes used as a soap substitute.
It should be remembered that one of the heaviest wood is extracted from the Guaiacum sanctum which sinks in water under its weight instead of floating.
The heartwood ranges from a dark greenish brown to almost black, becoming even darker after exposure to air and light.
It is easily distinguished from the narrow pale yellow or cream colored sapwood.
The wood is extremely hard and heavy; very fine and uniform texture with a very intertwined grain; oily, for a resin content (guaiac content) which constitutes about 25% of the dry weight; turns and shapes well and takes polishing well; it is also very resistant to the attack of decaying fungi, termites and borers.
Due to the oily resins present, the wood requires special surface treatments to have a satisfactory bond. It does not need to be stored due to its high content of guaiac resin and the high density of the wood.
Wood is used in bearings, bushings, pulleys, sledge hammers and turning works. It was once popular for use in the manufacture of bowling balls. Its best known use is in bearings and bushings for ship driveshafts due to its self-lubrication and hardness.
It can also be used as wood to make pipes.
Guaiacum sanctum is the national tree of the Bahamas.

Preparation Method –
Both the wood and the resin of Guaiacum sanctum are used in medicine.
Wood, in particular, is used as a mild laxative and diuretic.
A decoction is prepared which, taken hot, acts as a diaphoretic, while if cold it works as a diuretic. It is also widely used for the treatment of secondary syphilis, skin and scrofula diseases.
Resins obtained from wood, bark, leaves and flowers are used in some pharmaceutical preparations.
The resin obtained from the heartwood is diuretic and slightly laxative.