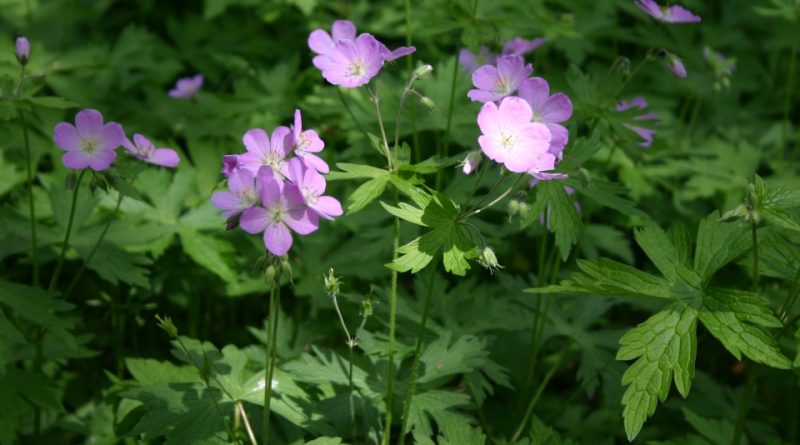 Etymology –
The term Geranium comes from the Greek γεράνιον gheranion geranium in Dioscorides, derived from γέρανος ghéranos gru: due to the fruits similar to the beak of cranes.
The specific epithet maculatum comes from macula stain: due to the presence of spots on leaves, petals, stems, etc.

Geographic Distribution and Habitat –
Wild geranium is a species native to woodlands in eastern North America, from southern Manitoba and southwestern Quebec south to Alabama and Georgia and west to Oklahoma and South Dakota.
Its habitat is that of wet places in the woods, wet rocks, meadows and swamps where it grows abundantly when found. 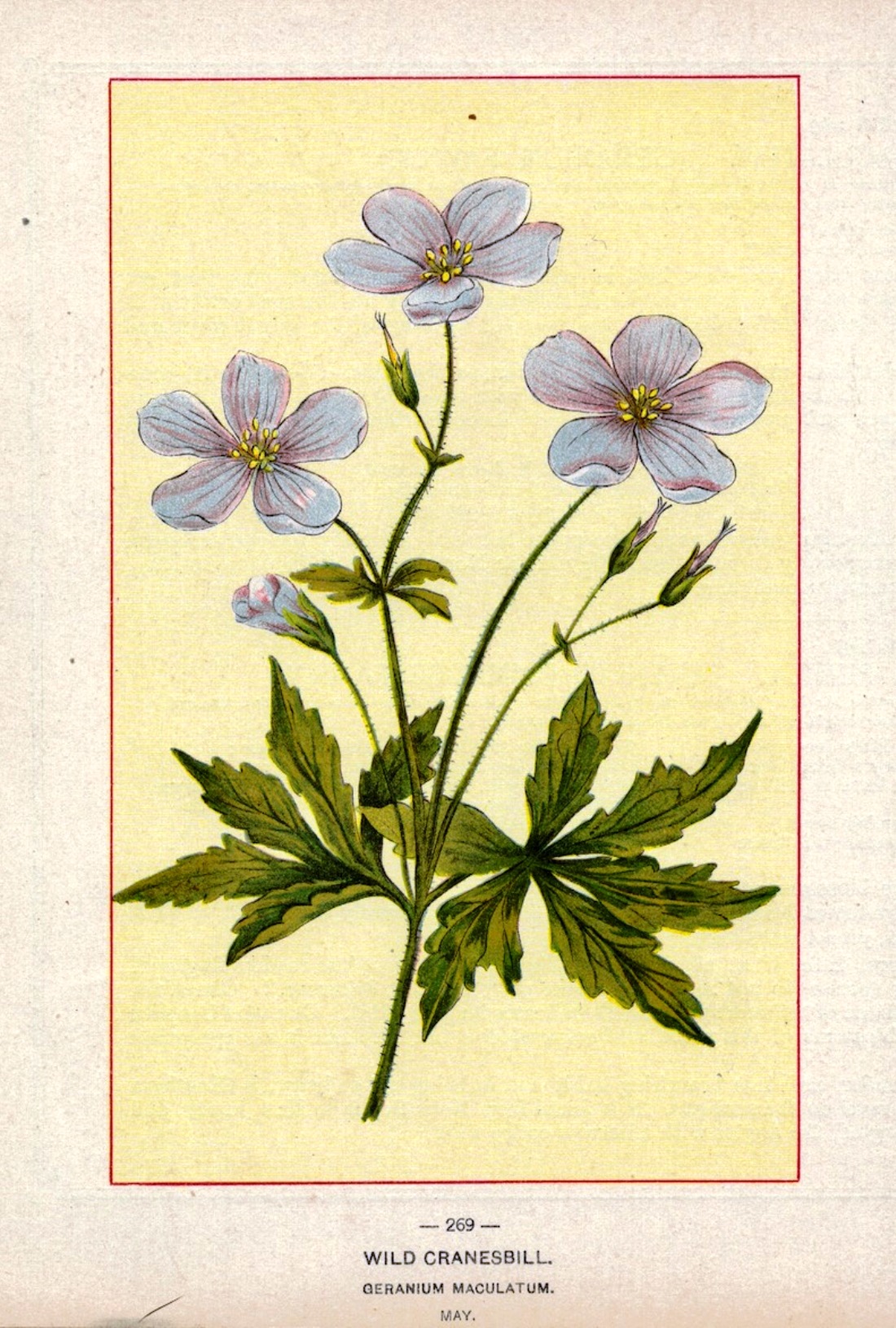 Description –
Geranium maculatum is a herbaceous perennial that grows up to 60cm tall, producing erect stems and flowers, usually unbranched in spring to early summer.
The rhizome is 5 to 10 cm long and thick, with numerous branches. It is covered with scars, showing the remains of the growth stems from previous years. Once dry, it has a purplish color internally.
The leaves are palmate and lobed in shape with five or seven deeply incised lobes, each of which is again split and toothed and are 10-12.5 cm wide, with a petiole up to 30 cm long.
The flowers are 2.5–4 cm in diameter, with five pink-purple, pale or purple-violet (rarely white) petals and ten stamens. They are grouped in loose corymbs or two to five umbels at the top of the flower stems.
Flowering can go from April to June, depending on the latitude.
The fruit is a capsule that opens when ripe, and is composed of five cells each containing a seed joined to a 2-3 cm long beaked column (similar to the beak of a crane) produced from the center of the old flower.

Cultivation –
Geranium maculatum is a well known species in cultivation and of which numerous cultivars have been developed.
This plant grows in any soil, as long as it is moderately fertile and in a sunny position.
Plants are resistant to about -25 ° C.
Propagation occurs by seed, with sowing in the spring. When the plants are large enough to handle they can be transplanted in the summer.
It can also be propagated by division in spring or autumn. The larger clumps can be replanted directly into their permanent locations, although it is best to settle the smaller clumps and grow them in a cold greenhouse until they root well, transplanting them in the spring.

Customs and Traditions –
Wild geranium has been used in herbal medicine and is cultivated, as mentioned, also as a garden plant. Wild geranium is considered an astringent, a substance that causes tissue to contract and stops bleeding.
The Mesquakie Indians made herbal tea from the root for toothache and sore nerves and crushed the roots to cure hemorrhoids.
The whole plant, but especially the root, is antiseptic, strongly astringent, diuretic, haemostatic and tonic.
An infusion of the whole plant, or the roots alone, is used in the treatment of diarrhea (especially in children and the elderly), dysentery, irritable bowel syndrome, cholera, kidney disorders, bleeding and a wide range of other ailments.
It is often used in conjunction with other herbs.
In external use it is used on purulent wounds, hemorrhoids, vaginal secretions and inflammation of the mouth.
The plants are rich in tannin, contained in the root around 10-20%.
Among other uses, it should be remembered that a brown dye is obtained from the flowers.

Preparation Method –
The roots of Geranium maculatum can be harvested in the fall, then dried and stored.
It is advisable to collect the roots when the plant comes into flower since it is then that it carries out the greatest medicinal active.
The leaves are also harvested when the plant blooms and dried for later use.