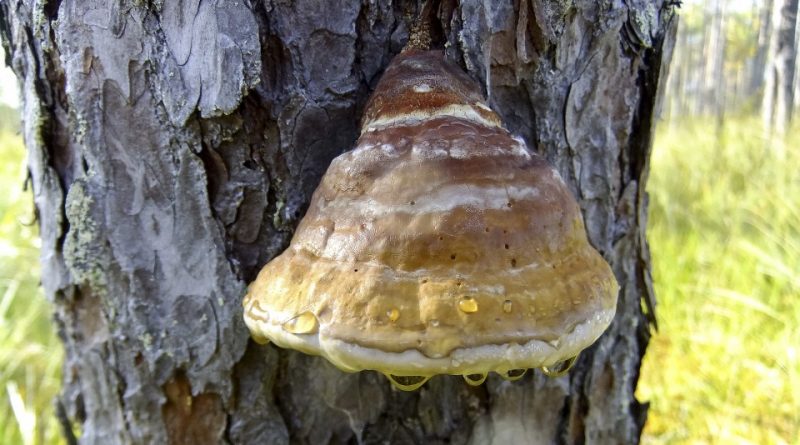 The tinder fungus (Fomes fomentarius (L.) J.Kickx f., 1867) is a fungus belonging to the Polyporaceae family.

Geographic Distribution and Habitat –
The tinder fungus is a species found in Europe, Asia, Africa and North America.
Its growth habitat is that of broad-leaved trees, both living and dead, in summer-autumn, for several years. This parasite or saprophyte of broad-leaved trees is able to degrade wood very quickly.

Recognition –
Fomes fomentarius is a perennial, sessile mushroom, with a hoof-shaped fruiting body of 10–40 cm in length; in the first stage of growth the cap has concentric and wavy furrows, with a soft and ash-colored crest; then rounded rim, light rusty; when ripe, the crest is hard, massive, ocher or brownish in color, with a rough edge.
The tubules are long, multi-layered, rusty.
The pores are fine, round, small, creamy white to brownish and very fragile.
The meat has a subery or spongy consistency, hard, reddish-brown in color, with a markedly fungal or woody odor, very pleasant, especially near the pores.
Under the microscope, oblong and yellowish spores are observed in mass.

Cultivation –
Fomes fomentarius is not a cultivated mushroom but which lives on live trees (poplars, alders, oaks, beeches) in correspondence with “wounds” as a parasite, propagating its mycelium inside the wood and generating the typical cantilever carpophores, the mushroom continues its existence as a saprotroph highlighting the phenomenon of geotropism, that is the ability of this type of fungus to orient the fertile part parallel to the soil by screwing on itself, thus ensuring an excellent dispersion of the spores.

Customs and Traditions –
The tinder fungus is not an edible, especially due to its consistency practically equal to that of wood.
This mushroom, as well as for triggering the fire, was used in the past for its high absorbency (kitchen paper effect); it is still used today, for example, as an accessory for fly fishing with the name of “Amadou” (derivation of Amadouvier, vulgar name in French for Fomes). It is used, in particular, to dry artificial “flies”.
The Mummy of Similaun, also known as Man of the Similaun or Man of the Hauslabjoch and generally nicknamed Ötzi, anthropological find, found on 19 September 1991 in the Ötztal Alps, and lived about 5,000 years ago, was found with finds of pieces of Fomes fomentarius ; the fact that this material was well preserved in the bag, together with flint objects, suggests that it was a mushroom used as a fire bait.
But the Fomes fomentarius was also used to make clothes and other objects and, moreover, for medicinal and other uses.

Preparation Method –
The method of preparing the fire involved cutting the mushroom to expose the internal flesh, initially compact but easy to defibrate with a knife or a sharp stone.
After being gently scraped, the fibers form a small mass of spongy wads called amadou, perfect for holding a spark or embers created using traditional friction methods.
Amadou, if prepared well in advance of lighting the fire, had to be stored with care: it is a material with a high water absorption power and its effectiveness can also be compromised by excessive atmospheric humidity.
The most convenient and effective solution to protect it from water was to carry whole pieces of mushroom to prepare them only when needed. In this way, the hard outer rind protects the internal fibers from moisture attack.
Once lit, Fomes fomentarius and amadou begin to burn slowly but steadily without ever generating a flame. The combustion reaches high temperatures and can last for some time depending on the size of the mushroom fragment.
These characteristics made it an ideal material for transporting embers over long distances: by placing an ember in a special niche made in the flesh of the mushroom, it could be carried for hours without running the risk of weakening or extinguishing it.