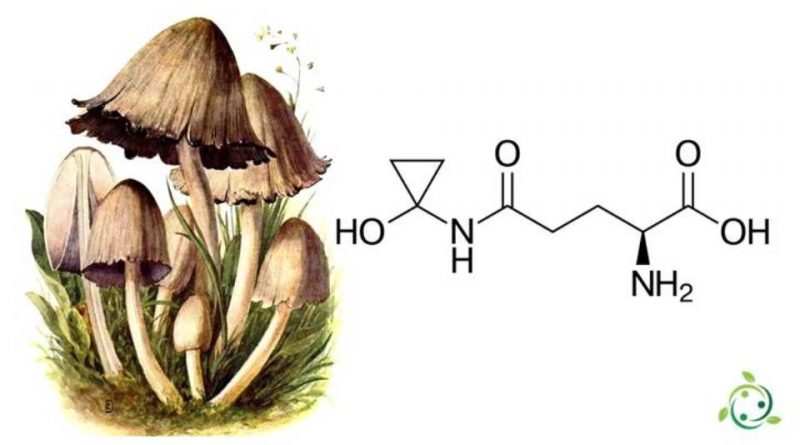 The coprine, whose term in the official IUPAC nomenclature is: N- (1-hydroxycyclopropyl) -L-glutamine is an alkaloid with the brute or molecular formula C8H14N2O4.
Coprine is a toxin present naturally in Coprinus atramentarius (ink fungus) and Coprinus micaceus, and some species of other genera, together with alcoholic beverages.
The intake of the cover is followed by so-called Sheinin Symphony, caused by the consumption of the fungi in combination with alcoholic beverages.
This syndrome occurs because, when these mushrooms are ingested together with alcohol, the cover (a molecule in them) gives rise to the synthesis of a metabolite (1-aminocyclopropanol) which blocks the degradation of the alcohol itself.

With this altered metabolism the acetaldehyde (toxic), metabolite of ethanol, no longer converts into acetate and accumulates in the blood stream and in the liver, causing a series of symptoms affecting the cardiovascular system, from vasodilation to the consequential facial redness , from tachycardia to arterial hypotension, from headache to a state of fever with tremors and marked sweating.
Coprin syndrome, however, does not have a fatal outcome, but it can involve serious risks in subjects such as heart patients or the like. The malaise can last for a few hours in the absence of further consumption of alcoholic beverages.
Typically, the incubation of this syndrome occurs after 15 to 30 minutes after alcohol intake and the duration of the malaise 2 h in the absence of further alcohol consumption.