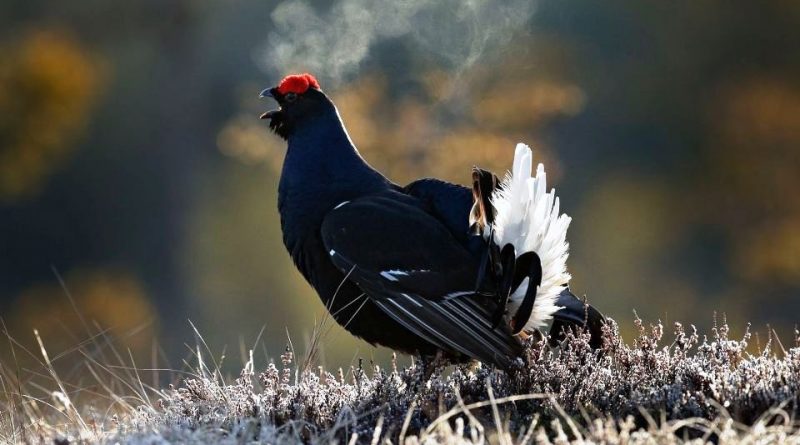 The black grouse (Lyrurus tetrix Linnaeus, 1758) is a bird belonging to the Phasianidae family.

Systematics –
From a systematic point of view it belongs to:
Eukaryota Domain,
Kingdom Animalia,
Phylum Chordata,
Subphylum Vertebrata,
Aves class,
Order Galliformes,
Family Phasianidae,
Subfamily Tetraoninae,
Genus Lyrurus,
Species L. tetrix.
The term is synonymous:
– Tetrao tetrix L.
The following subspecies are recognized in this species:
– Lyrurus tetrix brittanicus – present in parts of Great Britain, Scotland, Wales and northern England; it is the smallest and the darkest;
– Lyrurus tetrix tetrix – widespread mostly from Scandinavia and western Europe to north-eastern Siberia;
– Lyrurus tetrix viridanus – present in northern Kazakhstan, Russia in south-eastern Europe and south-western Siberia between the Don and Irtysh rivers, including the Ural mountains; it has whiter wings and brown streaked upper parts;
– Lyrurus tetrix tschusii – spread from the Irtysh River to Lake Baikal, north to Tomsk and Krasnoyarsk and south to Altai and Sayan mountains;
– Lyrurus tetrix mongolicus – present in Kyrgyzstan and Tien Shan in the east to the mountain ranges of the Altai, Sayan and neighboring areas and in western Mongolia;
– Lyrurus tetrix baikalensis – in south-eastern Siberia, from Lake Baikal eastwards to Amurland and southwards to northern Mongolia and north-eastern China (Inner Mongolia); perhaps the largest, with luster is lighter blue color;
– Lyrurus tetrix ussuriensis – widespread in the far east of Russia, Amurland, north-eastern China (sp. Heilongjiang and Jilin) ​​to the Ussuri river and north-eastern Korea; smaller than baikalensis.

Geographic Distribution and Habitat –
The Black Grouse is widespread over a vast range throughout Europe (especially in the Italian-Swiss-French Alps, from Great Britain (but not in Ireland) through Scandinavia, Estonia and Russia. In Eastern Europe it is found in Hungary, Latvia, Lithuania, Poland, Belarus, Romania and Ukraine. There are scattered populations in the Alps and isolated remains of them in Germany, France, Belgium and the Netherlands. It was previously found in Denmark but the Danish Ornithological Society (DOF) considers it extinct since 2001. Furthermore, the species disappeared from Bulgaria in the 19th century.
In Asia, a substantial population can be found in Russia (particularly in southern Siberia), although it is also present in parts of Kazakhstan, Mongolia, China, and possibly Korea.
Its habitat is very diverse. In Eurasia it has adapted to a vast typology of habitat even if most of the time it uses the transition zones between forests and open clearings, in particular steppes, moors, prairies and pastures, especially if adjacent to agricultural fields. Depending on the season, they will overwinter in large flocks in dense forests.
In Italy it is present only in the Alps, although sporadic and accidental sightings have been reported in some areas of the northern Apennines (it is not excluded that some individuals, in late autumn, may also travel over great distances and, coming from the Alps or the Prealps overlooking the Po Valley, can end up on the Tuscan-Emilian Apennine reliefs).
This bird, throughout spring and summer, tends to prefer open spaces to seek potential mates and raise broods; it also avoids the most extreme desert and polar regions. 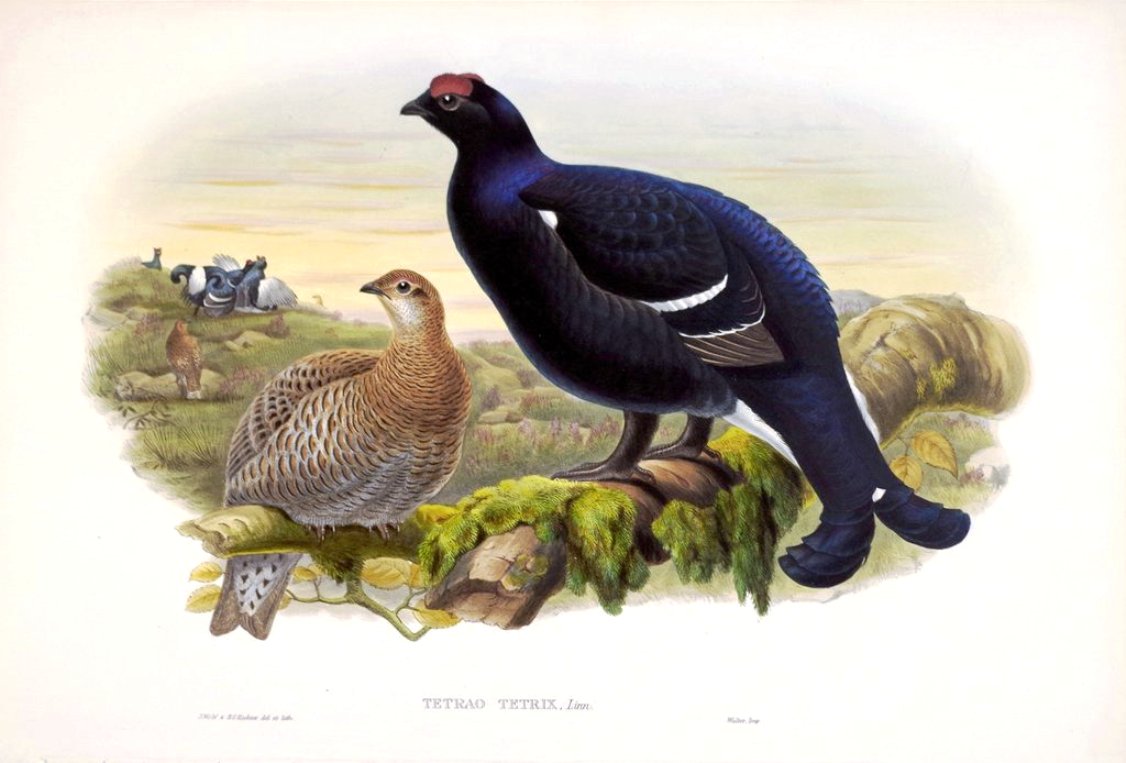 Description –
The Black grouse has an evident sexual dimorphism; the males have a length of about 60 cm, with a wingspan of about 90 cm, while the females have a length of about 45 cm, with a wingspan of about 80 cm.
They have a generally black plumage, with the head, the neck and the lower part of the back of a bright blue-steel color, drawn in white bands when the wings are gathered; the feathers of the undertail are very white.
The eye is brown, the black-blue pupils, the black beak, the brown fingers, the top of the eye and the naked periocular space are bright red.
The female of this species resembles that of the capercaillie, and her dress is a mixture of yellow-rust and brown-rust with black stripes and transverse spots.
The plumage in young subjects is very similar to that of females until late summer; later, in the males, the first black feathers appear.
The voice, which varies with sex, in the cry of call consists of a characteristic breath, and is enriched in the mating season to an extent that would seem disproportionate in birds like these, generally rather taciturn.
It also has a fast flight accompanied by frequent glides, even for long stretches.

Biology –
The Lyrurus tetrix is ​​a polygamous species; the male fertilizes more females and the reproductive period arrives at the beginning of spring, although in the central regions of Europe the period begins in the second half of March and lasts until May and on the hills and in the Nordic countries even later, and can last until July. In these periods the males gather in more or less numerous groups and perform in morning fights, even very violent, to determine which rooster will mate. The fixed places where these daily parades take place are called “singing arenas”. If there is no disturbance, the arenas are preserved for many years.
After a few days from mating, the females build the nest, at ground level and often hidden among the rhododendron or juniper bushes, in the woods or in clearings.
The nest consists of a rudimentary depression dug in protected places.
In this nest 4 to 10 eggs are laid, light yellow in color with small brown spots.
The hatching period lasts about 28 days and in this period the female leaves the nest only to feed.
The little ones stay in the company of their mothers until late autumn and leave only after having dressed the adult plumage.
The young ones make short flights as early as 15 days but are able to fly well only at one month of age.

Ecological Role –
The black grouse is more agile than the capercaillie, much more skilled in the movements: it runs more quickly keeping the body less tilted backwards, on the trees it is now erect now horizontal, and, despite the shortness of the wings, flies well, in line straight and often for long stretches, lighter and less noisy than the similar. His senses are very acute, and great wisdom that he explains in all circumstances: he is alarmed by the slightest shadow of danger, he mistakes the real risk with the apparent one, immediately seeking escape in the escape, and he is always rather difficult to surprise.
Its feeding is characterized by leaves, buds, berries, seeds and insects; during the summer it feeds on raspberries, blueberry fruits and blackberries; in winter it feeds on juniper berries and the seeds of heather, birch, alder and beech trees. In addition to vegetables, they feed on small snails, worms, ant larvae, flies and the like, and the small ones in particular are fed almost exclusively on tender insects. In Siberia, when the frosts begin, they are seen resting on the tops of the poplars and intent on running through the dry branches with their beaks to gather their buds: they too need mineral fragments to facilitate digestion.