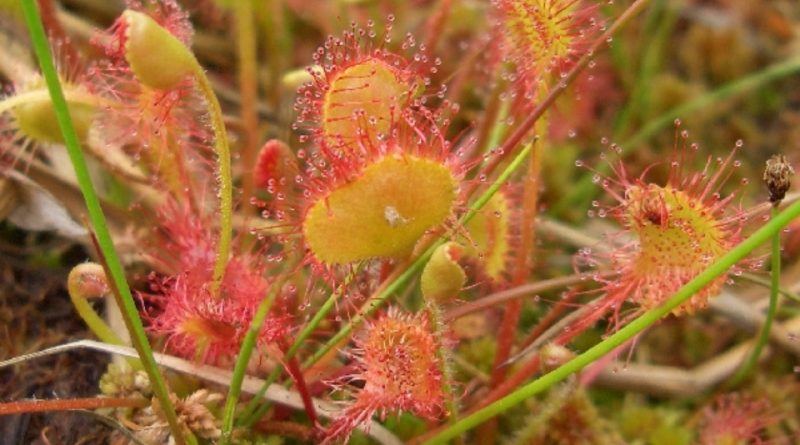 The Roundleaf sundew (Drosera rotundifolia L., 1753) is a carnivorous herbaceous species belonging to the Droseraceae family.

Etymology –
The term Drosera comes from the Greek δροσερός droserós dewy, which has droplets.
The specific rotundifolia epithet comes from round rotundus and folium leaf: with rounded leaves.

Geographic Distribution and Habitat –
Roundleaf sundew is a plant with a cosmopolitan distribution, limited to the northern hemisphere.
We find it in North America, southern Alaska, in most of Canada, in the north-eastern United States, along the Appalachian range and as far south as Georgia and Louisiana.
In Asia, it is reported in Siberia, the Kamchatka Peninsula, Japan and South Korea, as well as in areas of Turkey and the Caucasus region. Some populations have also been found in New Guinea.
It is also present in most of Europe, including Great Britain, Iceland, the northern part of Spain, most of France, the Benelux countries, Germany, Denmark, Switzerland, Poland, Romania, the Baltic countries (Estonia, Latvia and Lithuania) Sweden, Finland, the southern regions of Norway and Greenland. It is infrequent in Austria and Hungary.
In Italy, where it was once a very common plant, it has become very rare and it is possible to occasionally meet it along the Alpine and pre-Alpine arc. The southern limit of its distribution is in Tuscany, within the Natural Park of Migliarino, San Rossore, Massaciuccoli.
Its habitat is that of sphagnum peat bogs and at the edges of swamps and marshes with acidic waters, from sea level to the alpine belt (up to 1600 m) on very acidic and nutrient-poor substrates, which it obtains by digesting the small insects that they remain entangled on the leaf glands. 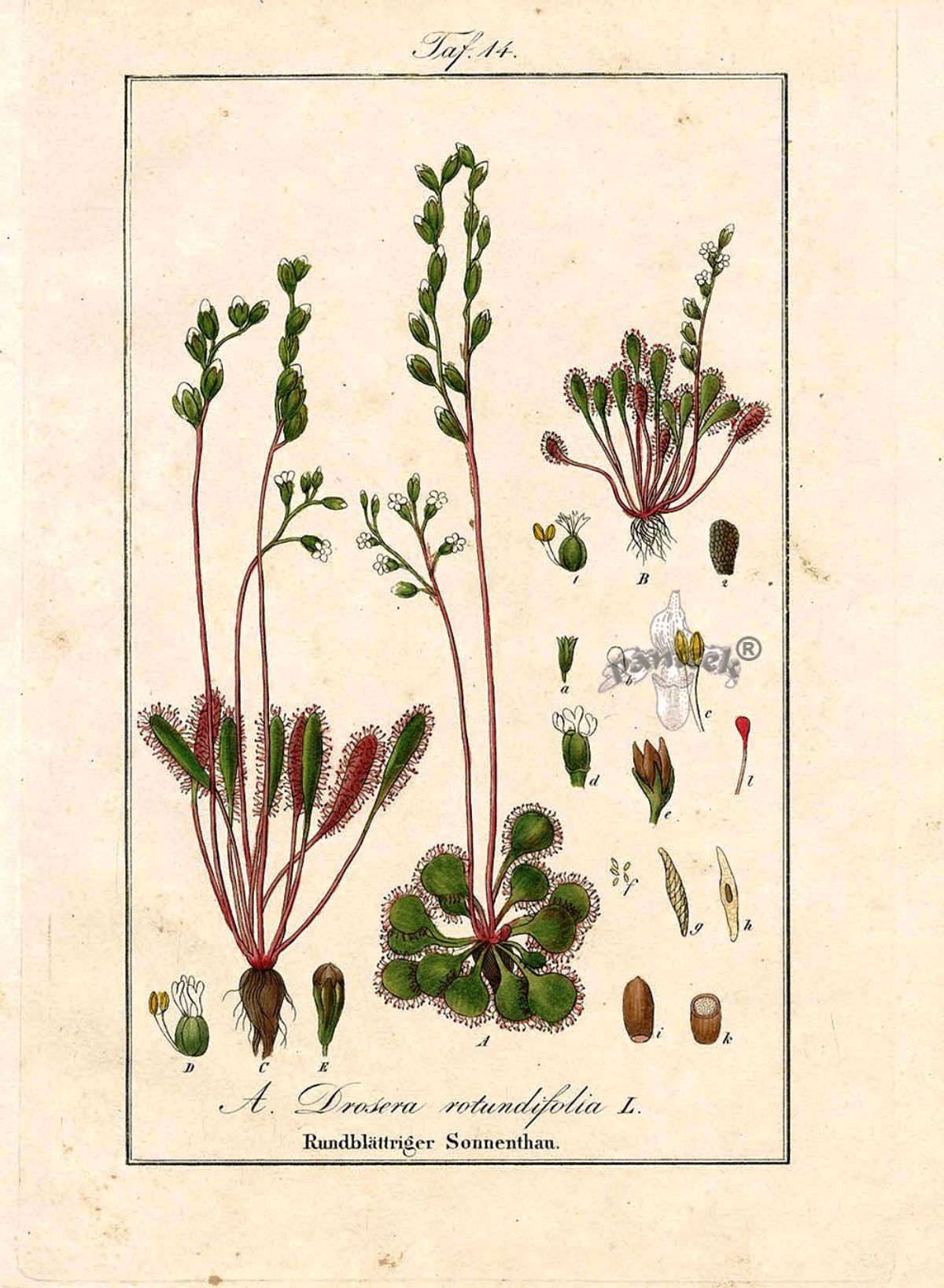 Description –
Drosera rotundifolia is a herbaceous plant that reaches a height of 10–20 cm.
The leaves are obovate in shape, carried by a long petiole, arranged in a basal rosette, with long tentacles with purple hairs which secrete drops of a viscous liquid, in which small insects remain trapped. The tentacles fold over the prey after capture.
The flowers are small and white, and the anthesis occurs from April to September.
Flowering occurs copiously and carried by long floral stalks.
The fruits are loculicidal capsules, ovoid, smooth, 5-6.5 x 3-2.5 mm.
The seeds are fusiform, about 1.5 mm, reticulated.
During the winter months, the plant closes in a sort of hibernacle to face the rest period.

Cultivation –
Roundleaf sundew is a plant that prefers a peaty sandy soil, succeeding in poor soils and swamps where it requires a sunny position.
Being an insectivorous plant, it can survive in nitrogen-poor soils because it receives the nutrients it needs from insects.
Propagation can occur by seed to be sown with little substrate coverage as soon as it is ripe in pots (autumn – winter period), with draining soil with the addition of a little charcoal and with a layer of finely chopped sphagnum moss.
The seed usually germinates in 1 – 2 months at 20 ° C. Ensure that the soil does not dry out.
The transplant should be done in their permanent positions in late spring.

Customs and Traditions –
Drosera rotundifolia has a long history of use in herbal medicine, having been popular for its fortifying and aphrodisiac effects.
This plant is used in herbal medicine for its expectorant properties, as a calming cough, in the treatment of chronic bronchitis and in asthma. It is also used with advantage in the treatment of pertussis, exerting a peculiar action on the respiratory organs.
Externally it is used for the treatment of calli, warts and bursions.
However, it must be used with caution and its internal use causes a harmless staining of the urine.
An extract of the plant contains antibiotic antibiotic substances against a wide range of pathogens.
Drosera rotundifolia contains significant amounts of polysaccharides, polyphenols including: hyperoxide, quercetin and isoquercetin plus various secondary metabolites.
The leaves were collected to prepare various medicinal preparations useful in important cough (whooping cough) and for various respiratory diseases, thanks also to the presence of flavonoids and derivatives of ellagic acid. In addition, the antimicrobial activities of aerial parts extracts against various bacterial types are investigated. Drosera produces various secondary metabolites among which the most abundant of these compounds are naphthoquinones. The interest in naphthoquinones stems from the fact that they exhibit interesting fungicidal and antibacterial properties.
Chemical analyzes of Drosera extracts have shown that they possess anti-inflammatory properties, this effect which can be attributed to the presence of naphthoquinone and / or flavonoids. Ellagic acid plays an important role in the antiangiogenic effect of Drosera extracts. The anti-inflammatory properties in vitro are also attributed to the inhibition of the production of PGs
Drosera rotundifolia also produces a wide range of chitinolytic enzymes.
According to a 2009 Japanese study at Tokai University, Drosera is said to be able to suppress the inflammatory response on mast cell and T cell membranes in response to ATC-m.
In a research on animals, conducted in 2004 at the University of Vienna, the antibronchospastic property of Drosera was discovered for a mediated action on muscarinic type 3 receptors (M3), this effect seems to be attributable to the presence of ellagic acid. This figure confirms, among other things, a previous German research in 2002.
From an ecological point of view, it is emphasized that Drosera rotundifolia has become rather rare and therefore, in nature, it should never be harvested.
In fact it is classified as Least Concern in the IUCN red list. In North America, it is considered endangered (Illinois and Iowa), vulnerable in New York State, and threatened in Tennessee.
In other areas, such as in Italy, it has become quite rare.

Preparation Mode –
For its uses, this plant is harvested in the summer and can be dried for later use.
The whole fresh plant, harvested when it begins to bloom, is used to prepare a homeopathic remedy.
There are some edible uses of Drosera rotundifolia.
The juice of the plant is used to curdle vegetable milk; in this case, just heat the milk and leaves together to curdle the milk.