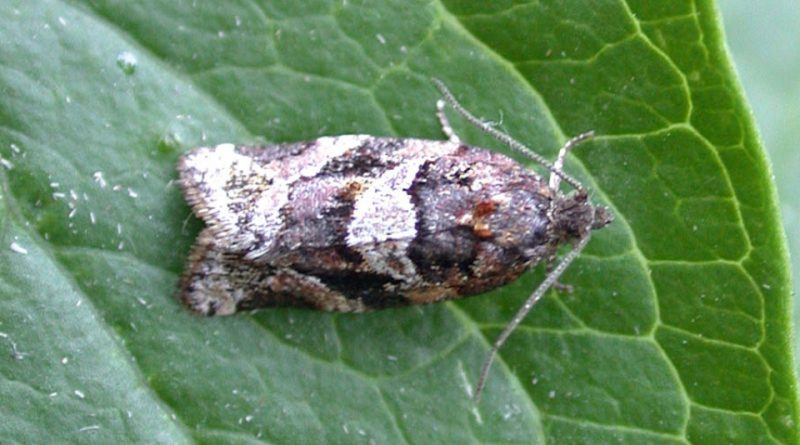 Morphology –
The Eulia is a small butterfly, with a wingspan of about 15 mm.
The front wings are light ocher in color with broad brownish transverse bands.
There is a sexual dimorphism which is limited to the larger size of the female.
The eggs are yellowish-white and spheroidal or slightly flattened, and are laid close together in ooplaces of 3-4, or 10-12, or 30-120 elements, usually near the leaves or on the aerial parts of the host plant .
The mature larva is greenish in color and almost hairless; in the head a pigmentation is observed only in the ocelli III, IV and VI. The hooks arranged in a circle can be seen on the pseudo legs.
The pupa is adectic, obtecta, with several mobile abdominal segments. It is hairless, with tiny spinules and a color that varies from reddish to dark brown. The cremaster is moderately developed.

Attitude and Life Cycle –
Eulia overcomes the winter at the chrysalis stage within shelters of various kinds (especially dry leaves) and, in the southernmost belt of its range, also at the larval stage. In the northernmost regions, this winter rest takes on the physiological characteristics of a real diapause, as is usually observed in other members of the family.
The flight of the first adults can already be seen between March and April in the regions at higher latitudes, and between February and March further south.
The oviposition, which occurs after mating, is carried out on the leaves of the nourishing plants but can also occur on twigs and aerial parts in general.
In the deposition on the apple tree, the young caterpillars remain collected in a sparse web near the median rib, on the underside of the leaf.
Initially, small rosures can be observed along the rib, better appreciated in transparency, but only in a second moment the leaf is folded on itself using closer silk fibers, and can also be welded to the small fruits in formation, of which it is exclusively affected the epicarp below the leaf itself.
The pupation phase takes place inside the damaged parts themselves.
Argyrotaenia ljungiana is a bivoltine species in colder latitudes, as in Switzerland and trivoltine in Northern Italy and quadrivoltine, with an incomplete last generation further south.
The second generation appears towards the end of June and arrives until mid-August. The latter provides the wintering larvae in Northern Italy, or a further fourth summer generation in the South, which will eventually lead to the hibernating generation.
The optimal parameters for the development of the various phases include a temperature of 22-28 ° C and a relative humidity of the air of 70-80%; the minimum temperature to guarantee the hatching of the eggs is about 15 ° C.

Ecological Role –
The larvae of this moth are distinctly polyphagous and in conditions of massive infestations they can cause serious damage to both arboreal plants (for fruit and not) as well as herbaceous plants, even cultivated ones.
The damage varies according to the affected plants.
– on the Pome fruit it manifests itself as for the other embroiderers, to whose group it is associated, damaging the buds, the flower bunches and the fruits.
– on the Vine it is very similar to that of the Moths; generally it is determined by the last two generations and consists of attacks on the berries that are superficially damaged, also creating the conditions for a fungal attack and consequent rot.
Under certain conditions, small erosions can occur on the leaves, which however do not cause serious damage.
The fight against the Argyrotaenia ljungiana follows the guided and integrated fight methodologies, carrying out a monitoring with sexual traps.
The procedure foresees that the traps are placed in the orchard in the middle of March; the number of sex traps is one or two per farm.
It should be remembered that there is no specific intervention threshold for the many variables to which this insect is subject and the damage threshold is evaluated cumulatively with that of the Moths.
For the Pome fruit a threshold of 50 adults captured per trap can be considered from the beginning of the 2nd and 3rd flight respectively. In the case of specific infestations, 5% of the infested castings sampled (for 1st, 2nd and 3rd generation) can be adopted as the intervention threshold (also cumulative with the other embroiderers).
Finally, it is reported that forecasting models have been developed for this insect that can give useful information on the time of intervention.