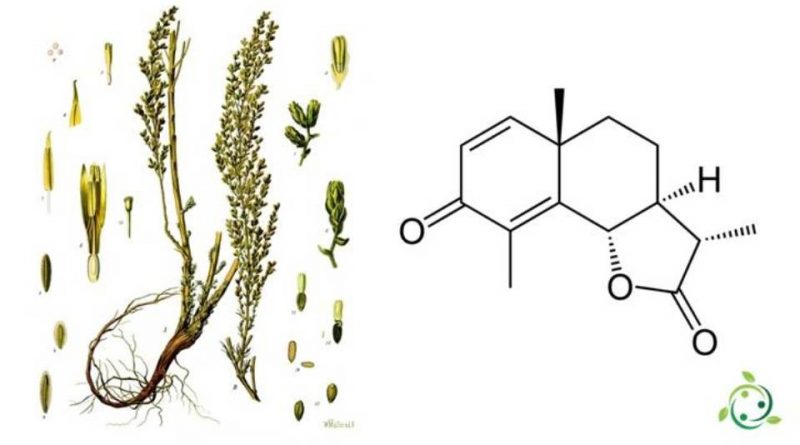 Santonin, whose term in the official IUPAC nomenclature is: (3S, 3aS, 5aS, 9bS) -3,5a, 9-trimethyl-3a, 5,5a, 9b-tetrahydronafto [1,2-b] furan-2, 8 (3H, 4H) –dione is an organic compound having the brute formula C15H18O3.
Santonin belongs to the series of sesquiterpenoid compounds.
This compound is obtained in nature from the unexpanded flower heads of Artemisia maritima var. Stechmanniana, while others have it obtained from the holy seed (Artemisia cina Berg & CF Schmidt ex Poljakov), a plant that was widely used in medicine for its powerful anthelmintic action, but which is now almost completely abandoned due to the collateral disorders that can cause (vomiting, abdominal pain, etc.).
Santonin paralyzes parasitic worms (helminths), allowing them to be expelled from the body. Santonine has the effect of paralyzing the anterior (anterior) end of the worm, while it has a stimulating effect on the posterior end, depending on the concentration. Because of this, the worm cannot coordinate and loses its ability to maintain its position in the host.
From a chemical point of view, santonin can be converted into santonic acid (C15H20O4) by base-catalyzed hydrolysis followed by a multi-step rearrangement process.

Furthermore, santonina is an optically left-handed compound.
This anthelmintic drug is presented in the solid state as colorless flat prisms, which turn slightly yellow due to the action of light and are soluble in alcohol, chloroform and boiling water.
Santonin dissolves in alkali with the formation of carboxylic acid salts. Santonine, in acetic acid solution, if exposed to sunlight for about a month, is converted into photosanthonic acid (colorless) (C15H22O5) which is generally considered less toxic The ethyl ester of the latter is obtained when an alcoholic solution of santonina is exposed to sunlight (Sestini). A yellow color develops when the santonina is exposed to light.