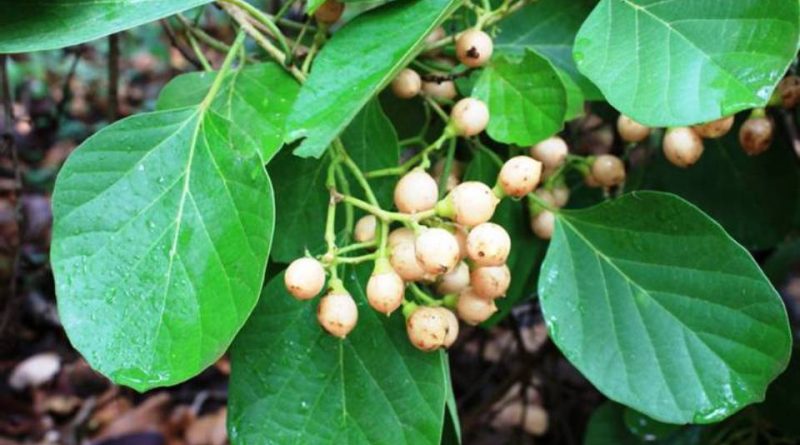 Lasura (Cordia myxa L.) is an arboreal species belonging to the Boraginaceae family.

Etymology –
The term Cordia of the genus was dedicated by Linnaeus to the German physician and botanist Valerius Cordus (15145-1544); according to other authors this genus also recalls Euricius Cordus (1486-1535), poet, professor of Medicine and botanist, father of Valerius.
The specific epithet myxa comes from the Greek μύξα myxa mucus, mucilage, due to its viscous consistency, especially in the gelatinous layer around the seed, similar to glue.

Geographic Distribution and Habitat –
Cordia myxa is a plant that grows mainly in Asia, as well as around the world, especially in tropical regions that have the right kind of geophysical environment. It grows abundantly from Burma in the east to Lebanon and Syria in the west.
Its habitat ranges from about 200 m above average sea level in the plains and rises to an altitude of about 1,500 m in the hills in dry deciduous woods, mainly on alluvial soils. 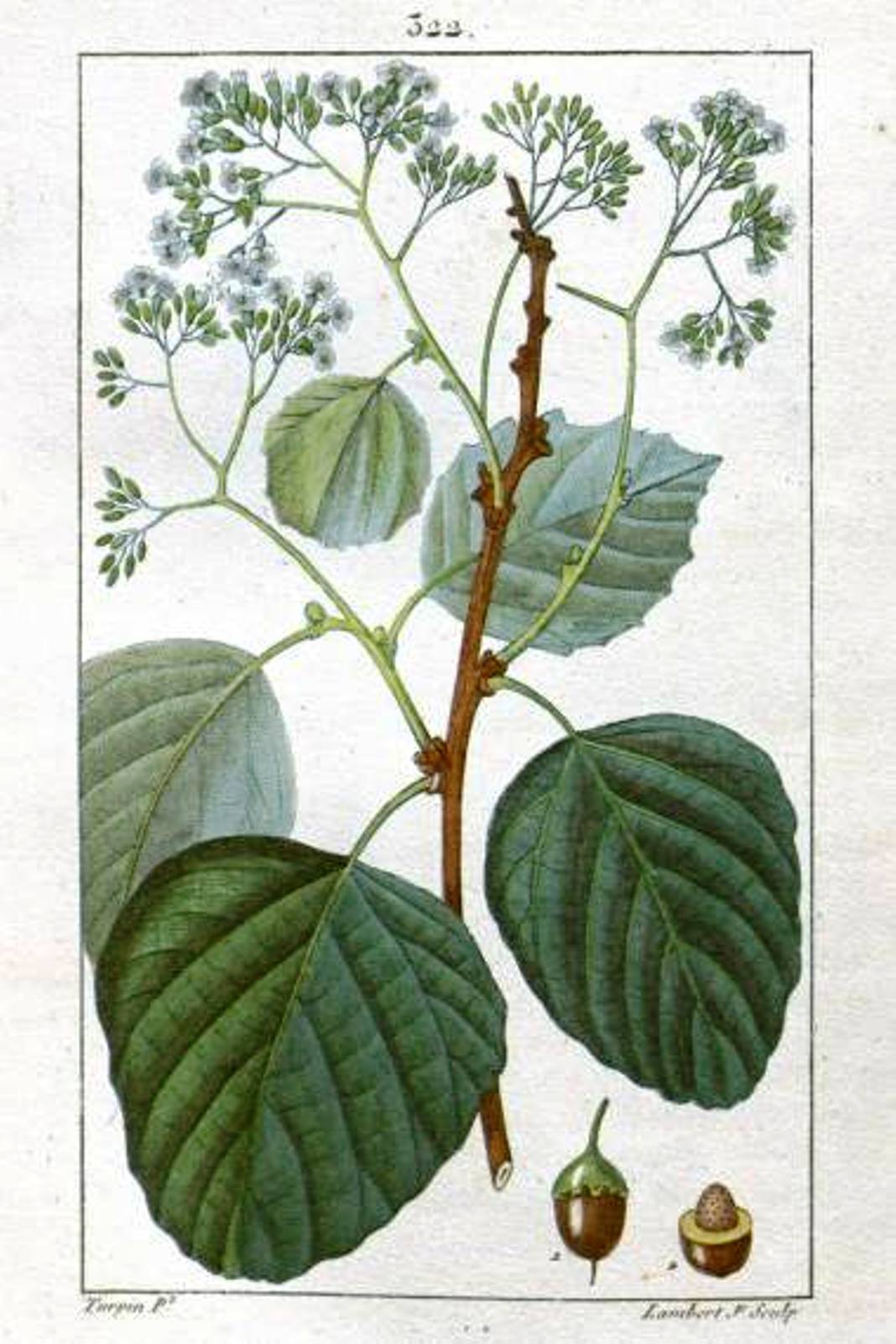 Description –
Cordia myxa is a plant that grows in the form of a large evergreen shrub or tree with a dense crown, up to 12 meters in height.
The plant reaches full maturity in about 50-60 years when its circumference at a man’s height measures about 1 – 1.5 m. Its main trunk is generally straight and cylindrical, reaching a height of about 3-4 m. The branches spread in all directions by virtue of which its crown can take the form of a beautiful dome upside down like an umbrella.
In less favorable climatic conditions, however, it has less growth and can reach a somewhat crooked shape. In even worse environments, a stunted shrub may even remain.
The bark is grayish brown with longitudinal and vertical cracks. The tree can be easily identified from afar by looking at the cracks that are so prominent in the bark of a tree’s main trunk as it approaches maturity.
The leaves are broad, ovate, alternate and pedunculated with a size between 7 and 15 cm x 5-10 cm. As for the external appearance, they are hairless above and pubescent below. Young leaves tend to be hairy.
The flowers are collected in inflorescences, mostly terminal, of white color. The individual flowers are almost 5mm in diameter. In some places these are slightly hairy and white. The calyx of a flower is about 8 mm long and hairless, but not pubescent. It splits irregularly at the opening of its flowering bud. The filaments are hairy.
Cordia myxa blooms from March to April.
The fruit appears in the months of July and August. It is a light to light brown or even pink drupe. The appearance tends to darken as ripening approaches. Being full of slimy glue like mucilage, the pulp is somewhat translucent.

Cultivation –
Lasura is a plant that can be successfully grown in temperate and tropical areas and can tolerate even a little frost.
It prefers a sunny location but can tolerate moderate shade. From the pedological point of view, it prefers a moist and draining clayey soil and stabilized plants tolerate drought.
In certain conditions it is a plant that often escapes cultivation but there is no certain information if it invades and damages the native environments.
It has a fairly rapid growth and can start flowering at 3-5 years. In the arid regions of India, an eight-year tree plantation produces an average of 32.4 kg of fruit per tree per year. The individual fruits weigh about 5 g.
Remember that it is a dioecious species for which, in order to have fruit, it is necessary to cultivate at least one male plant for every 5 females.
Propagation can occur by seed which is very slow to germinate, the process can be accelerated if the seed is scarified by slightly abrading the coating of the same to allow easier entry of water. It is recommended to soak the seed in cold water for 6 hours before sowing – a germination rate of 50 – 80% can be expected, with the seed germinating within 40 – 60 days.
Young plants can be planted in their final locations 4-6 months later.

Customs and Traditions –
Cordia myxa is a plant known by several names: Assyrian plum, lasura, pidar, panugeri, naruvilli, geduri, spistan, burgund dulu wanan and ntege.
It is a multipurpose plant that is often harvested in the wild for local use as a food, medicine, and source of materials. It has been cultivated for its many uses since the time of the ancient Egyptians, and is sometimes still cultivated today for its edible and medicinal fruits in many areas of the tropics and subtropics.
Fresh foliage is very useful as livestock fodder, especially during pasture famines.
The fruits, when the pulp is fully ripe, become quite sweet in taste and are appreciated by children. The pulp of a half-ripe fruit can also be used as an alternative to paper glue in office work.
Ripe fruits can be mixed with honey to make a dessert or to sweeten gruels and porridge.
Unripe fruits, as well as flowers and young shoots, are eaten as a vegetable.
They have a nutty flavor.
The seed is oily and contains palmitic, stearic, oleic and linoleic acids and β-sitosterol.
In the leaves there are stereoles and a gum.
The leaves and fruits contain pyrrolizidine alkaloids, coumarins, flavonoids, saponins, terpenes and sterols.
As for its medicinal uses, the bark, leaves and fruit have healing properties, are variously used as diuretics, emollients and in the treatment of stomach pains, coughs and chest disorders.
The juice of the bark is taken internally in the treatment of fevers; also combined with coconut oil, it is used to treat colic.
Powdered bark is applied to the skin in case of broken bones before applying a patch to improve healing. Bark powder is used externally in the treatment of skin diseases.
A macerate of the leaves is used as a treatment for sleeping sickness taken internally and applied externally as a lotion after fly bites.
The juice from the leaves is applied to the forehead to relieve headaches. The leaves are applied to wounds, sores and ulcers.
The sticky, mucilaginous pulp of the fruit is the source of a well-known medicine in the Near and Middle East. Called “sapistan”, it is useful in the treatment of cough, sore throat and chest ailments for its emollient properties.
The fruit is also used externally as an emollient patch for the maturation of abscesses, to calm rheumatic pains and as a pesticide on ringworm.
Cordia myxa also has agroforestry uses: the plant is used in protection belts in semi-arid regions to prevent soil erosion. It is also used as a shade tree in Yemen’s coffee plantations.
Further uses see the use of a fiber that is obtained from the bark of the stem and used to make twine and ropes. This fiber is also used for caulking boats.
The leaves and fruits are used as dyes.
The ash from the young branches is used to make soap.
The sticky, mucilaginous pulp of the fruit is used as a glue.
Wood was used as fire sticks.
The yellow-brown wood is soft but strong, easy to polish, and is used for making furniture, cabinet making, well curbs, boats and agricultural tools.
As for the possible toxicity, it should be remembered that this plant contains: pyrrolizidine alkaloids tumorigenic.

Preparation Method –
Cordia myxa is a plant of which practically everything is used for both medicinal and food uses and for obtaining various materials.
In the food field, sir still remembers that young shoots, unripe fruits, as well as flowers are eaten as vegetables.
The fruits, when ripe, can be mixed with honey to make a dessert or to sweeten gruels and porridge.