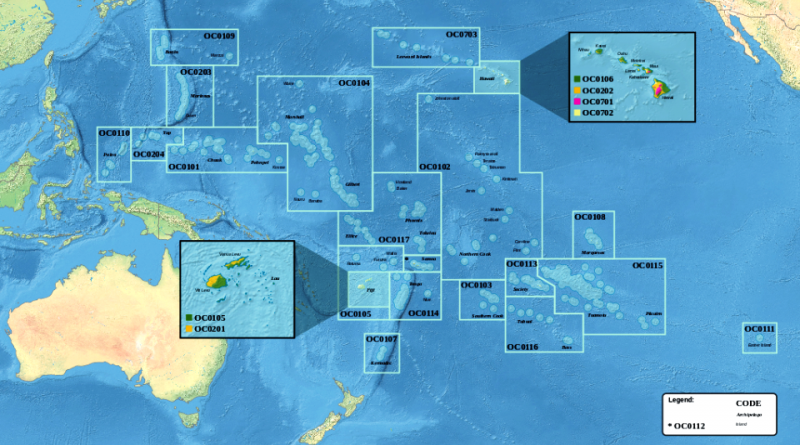 The Oceanian Ecozone is one of the planet’s ecozones that include Polynesia (with the exception of New Zealand), Micronesia and the Fiji Islands. This area has an extension of 1.0 million km2.
The Oceanian Ecozone is completely located in the Pacific Ocean and is the only ecozone that does not include any continental territory and is also the smallest of all recognized ecozones.
Geologically, the Oceanian Ecozone is the youngest of all ecozones. While all other ecozones include at least one continent or a part of it or at least a fragment, this ecozone is mainly made up of volcanic islands or coral atolls that have emerged from the sea in geologically recent times, mostly dating back to the Pleistocene.
These are formations whose origin is linked to hot spot volcanism or volcanic arc islands pushed up by collisions or subduction linked to tectonic movements.
From the climatic point of view this ecozone is tropical or subtropical, and varies from humid to seasonally dry. The wettest part of the islands is covered in tropical rainforest, while the driest areas, including the leeward coasts and many of the lower coral islands, are covered in arid tropical forest or savannah and shrubland areas. The slopes of the great Hawaiian volcanoes, Mauna Kea and Mauna Loa, are home to tropical mountain grasslands and shrubs with rare and sometimes unique flora.

Flora –
The presence of plant species and their diffusion within this eco-zone takes place through various methodologies. Some, mostly ferns and mosses but also some phanerogams, entrust their tiny spores to the wind or produce feathered seeds which can remain suspended in the air for a long time and be carried over a great distance; this technique is used by the Metrosideros trees, which in this way spread from New Zealand over the entire Oceania region. Other plants, such as coconut palms and mangroves, produce seeds that can float in salt water for a long time and be carried by currents to distant beaches; with this system, the coconut palm has colonized the entire area of ​​Oceania.
Among the vectors of diffusion and propagation of the species are included. Of course, the birds too. Some plants produce sticky seeds that stick to the legs or feathers of birds, others produce fruits whose seeds are able to pass through the digestive tract of birds unaltered and can then be expelled to areas far from the original ones. This is the system used by Pandanus trees, which are widespread throughout the oceanic range.
Most of the flora of the Oceanian Ecozone originally derives from the flora of the Malay Peninsula, the Philippines and New Guinea; other plants come from Australasia and the Americas, especially Hawaii. On Easter Island there are plants from South America such as totora reeds.

Fauna –
Terrestrial animals, indigenous to this eco-zone, given the difficulty of spreading through water, are limited in number.
Some types of animals important in other continental ecozones, such as large terrestrial predators and herbivorous animals, were originally completely absent from these areas and were subsequently introduced by man. Birds are obviously common, as are seabirds and some land bird species whose ancestors probably arrived on these islands following some storm. Some of these later evolved into flightless species, such as many rails.
Some islands have indigenous species of lizards, including geckos and skinks, whose ancestors probably came here by floating on elements of vegetation brought to the beaches by storms. With the exception of bats, there are no known indigenous species of mammals.