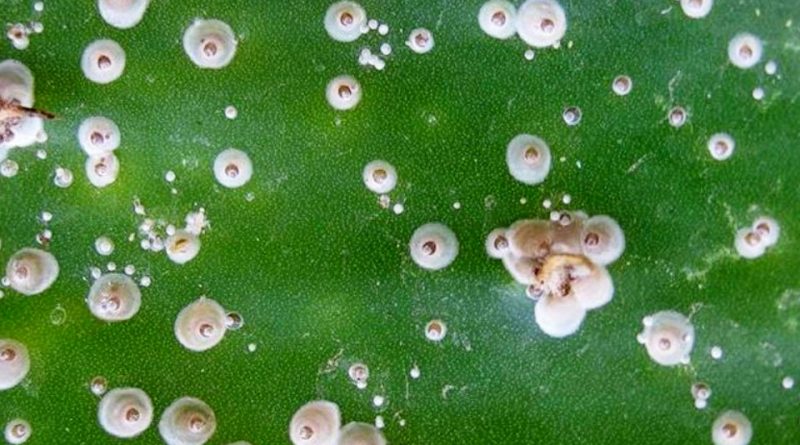 Geographic Distribution and Habitat –
The San Jose scale gets its common name from the city of San Jose, California, where Comstock studied and classified it in 1881.
Today it is a cosmopolitan species, it is considered the most dangerous cochineal in the world.
This insect was probably introduced to San José in 1870 from timber imported from China. In 1890 it spread throughout California, in 1895 the infection spread to many nurseries and orchards, especially in the Eastern states. Charles Lester Marlatt made entomological investigations in China, Japan and the island of Java in 1901-02.
Later it also arrived in Europe at the beginning of the 20th century, probably via boats from the Americas.

Morphology –
Quadraspidiotus perniciosus is recognized for having a grayish-leaden protective shield, elongated in males and rounded in females. The shields (or follicles) overlap in order to form thick layers and, at times, impermeable to phytosanitary treatments.

Attitude and Life Cycle –
The San Jose scale is positioned on the woody organs where, through bites and their saliva, it determines reddish chromatic alterations, which highlight the lifting of the rind. Subsequently, the tissues necrotize causing deformations and desiccation on the branches.
In case of severe attacks, however, swelling of the layers of the follicles is generated, leading to asphyxiation on the attacked organs.
This Cochineal can infest, with its colonies of follicles, woody organs (branches, trunks and branches), fruits and leaves.
Necrotic spots appear on the leaves, which in some cases lead to phylloptosis. The fruits show reddish spots with a central gray dot; the spots determine the depreciation of the fruits.
The Cochineal of San Josè overwinters in the nymph stage of 1 ^ 2 ^ age, under the follicles present in the permanent woody organs. Arrived in the spring period, in the period between March and April, the nymphs complete the development cycle; afterwards there is the fertilization of the females by males, winged or winged. From this fecundation, in the months of May-June, the nymphs of the first generation are born, given birth directly by the viviparous females; this generation is followed by the 2nd (July-August) and the 3rd at the end of summer (September-October). From this we have the wintering nymphs.
The insect thus completes 3 generations a year.

Ecological Role –
Quadraspidiotus perniciosus, with its bites, causes nutrition and the consequent emission of saliva, causes initial reddish chromatic alterations on the affected organs which are highlighted by lifting the rind; subsequently the tissues necrotize causing slight deformations but, above all, progressive deterioration and desiccation of the branches and the woody organs attached which become very receptive to secondary infections.
In the event of considerable infestations, prolonged over time, layers of follicles are formed which cause “asphyxiation” to the attached organs.
Furthermore, these “manicotti” become a place of refuge for the spread and multiplication of the phytophagus in the orchard since, due to their impermeability to insecticide treatments, it is not always possible to have a total disinfesting effect on the overlapping follicles.
For this reason, starting from 1940, the Ministerial Decree declared the fight against Quadraspidiotus perniciosus mandatory, to be carried out in the presence of attacks on Drupaceae and Pomeaceae.
the chemical fight must be carried out in winter or in the phases of bud break. The products to be used are: calcium polysulphides or activated white oils. Interventions can also be done at other times:
– at the exit of the first generation nymphs.
– at the exit of the third generation nymphs, in late summer, with the fall of the leaves.
In case of massive infestations, brushing on trunks is very useful. Biological control is based on the environmental conservation of predatory Coccinellids, such as: Chilocorus bipustulatus and Exochomus quadripustulatus. Always in the biological fight, the insertion of the parasitoid Hymenoptera Encarsia perniciosi is also foreseen, now well acclimatized in Italy since 1932.
It is also important to adopt, from the design stage of stone fruit and pome fruit trees, techniques of association with other crops, interruption of plots with hedges where the useful entomofauna can overwinter. Fertilization interventions must also include a lower use of nitric nitrogen fertilizers and a higher rate of organic origin.
The fight against this coccidis must be carried out even before using biological methods and in the management phase of the arboretums in the planning phase with agro-ecological techniques that increase biodiversity and decrease the specialization of the plots.