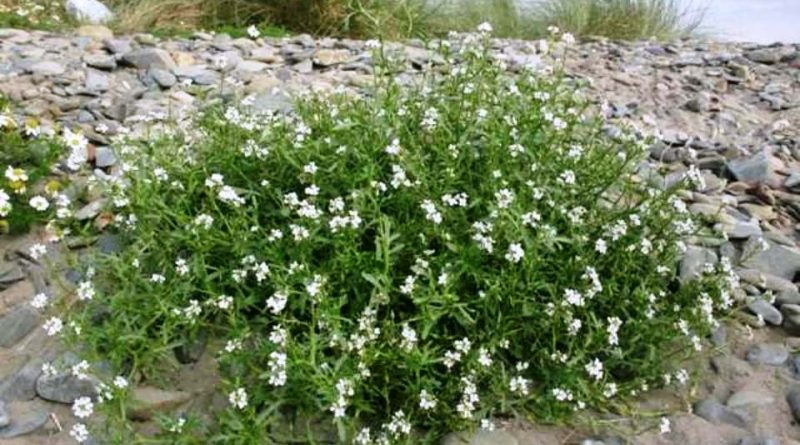 The European searocket (Cakile maritima Scop., 1772) is a herbaceous species belonging to the Brassicaceae family.

Etymology –
The term Cakile derives from the word Kakeleh, the name of the plant in Arabic.
The specific maritime epithet comes from the sea, the sea: maritime, marine, which grows near the sea.

Geographical Distribution and Habitat –
European searocket is a species with Mediterranean-Atlantic distribution and therefore present both in the Atlantic coastal areas of Europe and in the Mediterranean basin.
In Italy it grows along all the coasts, a pioneer on coastal sands, from here in subsalted ruderal environments rich in nitrates, always on the coast.
Being a pioneer species, as well as growing on coastal sandy areas and dunes, it can go inland, on high salinity soils. 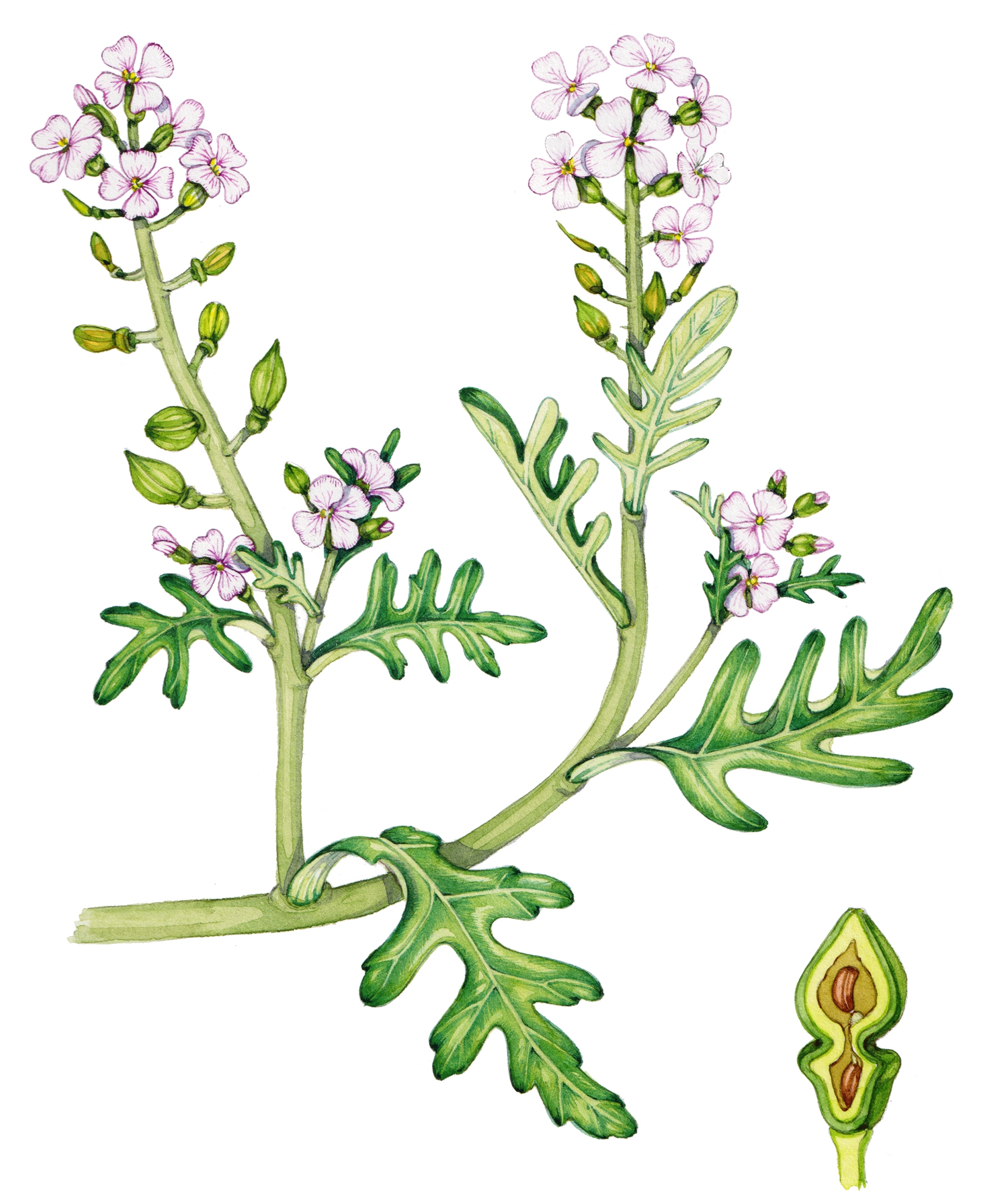 Description –
European searocket is an annual succulent herbaceous plant.
The plant consists of prostrate, branched stems, with alternating leaves, 3–6 cm long, from obovate to deeply pinnate.
The inflorescence is a dense apical raceme, with flowers that have 4 petals of a variable color from lilac to purple.
The flowering period is between January and December.
The fruit is a bilomice formed by two differentiated articles, monosperms, the larger ovoid or conical upper, the lower obconic-rhombic, indiscent. The seeds of 2.3-4.7 x 1-2.5 mm, are oblong, wrinkled, brown.

Cultivation –
Cakile maritima is a species that grows spontaneously and reproduces by entomophilic pollination.
The dispersion of the seeds occurs thanks to the wind and the tides: the fruits, suitable for floating, can also spread at considerable distances from the mother plant.

Uses and Traditions –
European searocket is a plant that has aperitif, digestive, carminative and diuretic properties.
Thanks to the high content of vitamin C, iron and iodine was used as an antiscorbutic.
The whole plant has been used in folk medicine for its antiscorbutic properties, probably due to the content of vitamin C, iron and iodine. In herbal medicine, flowers are used to obtain an aperitif, digestive, fluidifying and mildly diuretic herbal tea.
In the kitchen, the plant, which is still immature, can be eaten fresh in a salad or cooked and the seeds produce an oil similar to that obtained from mustard.
It also has cosmetic uses: an extract obtained from flowering tops has presumed anti-dandruff effects, while an infusion obtained from leaves is used to cleanse oily skin. The extracts have an antioxidant action and, in cosmetics, are used as skin conditioners, to keep the skin in good condition. An infusion obtained from the flowering tops, after shampooing, has an anti-dandruff effect.
A study by the Université de Bretagne Ovest, in 2007, highlighted the antioxidant and antimicrobial activity of the methanol and chloroform extracts of some halophyte plants, including Cakile maritima. These activities make the use of these species potentially interesting in the food and cosmetic industries.

Method of Preparation –
In addition to pharmaceutical and medicinal purposes, this plant can be used, as mentioned, for food use.
Leaves, stems, buds and siliques, still immature, can be eaten both fresh, as an addition to salads, and cooked. They are rich in vitamin C but have a sour and salty taste that does not make them appreciated by all palates. The immature plants, passed in the pan, can be used to season the pasta. The seeds contain an oil that can be used like that derived from mustard.