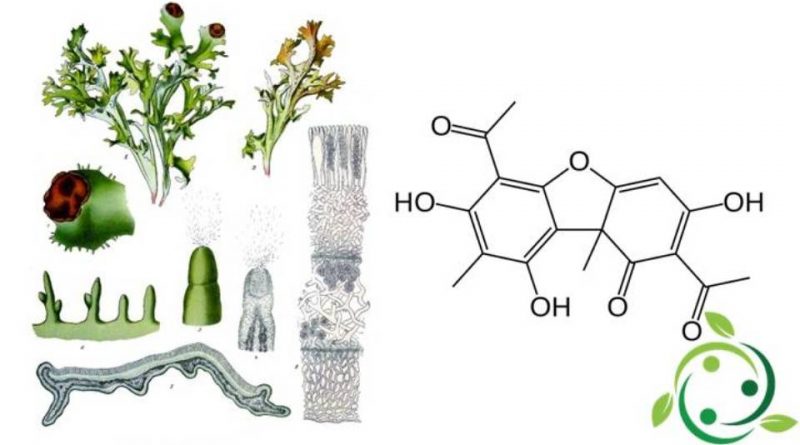 Usnic acid, whose term in the official IUPAC nomenclature is: 2,6-diacetyl-7,9-dihydroxy-8,9b-dimethyl-1,3 (2H, 9bh) -dibenzofurandione and whose alternative names are usnein, usninic acid or usniacin is a derivative of dibenzofuran, an aromatic heterocycle, consisting of two benzene rings and one of condensed furan.
Usnic acid has a brute or molecular formula: C18H16O7.
Under normal conditions, usnic acid is a solid, bitter and yellow colored substance, and is found in nature both in the right-handed and in the left-handed form, as well as as a racemic compound.
Usnic acid, in nature, is present in some species of lichens, such as Icelandic Lichen (Cetraria islandica (L.) Ach.), It has also been identified in many genera of lichens including Usnea barbata, Cladonia, Lecanora, Ramalina , Evernia, Parmelia and Alectoria.
Although it is generally believed that usnic acid is exclusively present in lichens, in some unconfirmed isolated cases, the compound was found in Kombucha tea and in non-lichenized ascomycetes.
Usnic acid is a secondary metabolite of lichens and its role has not been fully clarified. Usnic acid is believed to perform an action to protect lichen from negative effects due to exposure to sunlight and discourage grazing animals by virtue of its bitter taste.
Lichens, which are particularly widespread in the Nordic countries and are an excellent food for reindeer, caribou and elk, contain many substances whose pharmacological potential has been studied since the beginning of the twentieth century.

Usnic acid was isolated in 1844 by the German scientist Wilhelm Knop and the first synthesis dates back to the years 1933-1937 by Curd and Robertson.
Usnic acid has various types of biological activity and in particular has an antimicrobial activity against pathogens and plants, including inhibitory activity against antibiotic-resistant bacterial strains.
Usnic acid has been used for medical and cosmetic applications in creams, toothpastes, mouthwashes, deodorants and sun products, in some cases as an active ingredient, in others as a preservative for its anti-microbial activity.
However, the action of usnic acid is limited to Gram positive bacteria such as straphylococcus and streptococcus and therefore is present in many deodorants since Gram positive bacteria are among the main causes of the development of bad smells.
It also acts against some pathogenic fungi. It also appears to have antiviral, antiprotozoal, antifungal, anti-inflammatory and analgesic activity.
During preliminary research, it has been verified that usnic acid performs an adrenergic action in the nerve junction models of both frog and earthworm.
Usnic acid also has other characteristics, such as the absorption of ultraviolet radiation, conservation properties, bacterial growth inhibition properties. It also acts as an herbivore and pesticide as well as as an insect repellent.
This substance is used as an ingredient in creams, powders, toothpastes, mouthwashes, deodorants, hair shampoos and sunscreen products. In some of these preparations, the molecule is used as an active ingredient, in others as a preservative.