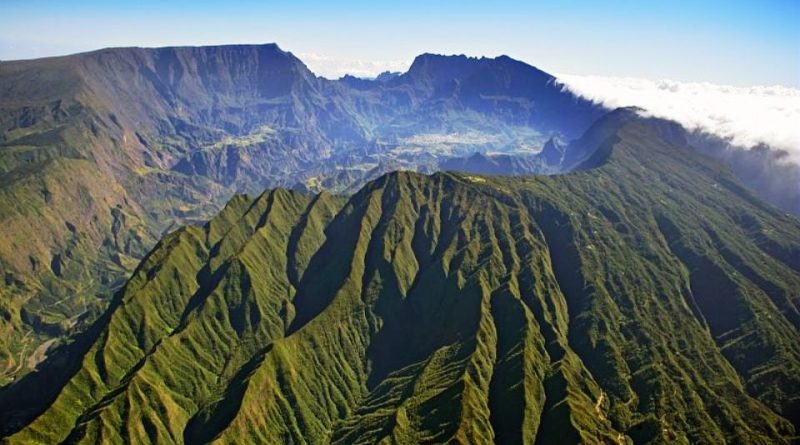 Reunion National Park was officially born on March 5, 2007.
This park was born on the island of Reunion which is located in the dangerous band of tropical cyclones, whose season runs from December to March. They are characterized by strong winds and extreme rainfall; Cyclone Gamede in 2007 set new world records of rainfall (3929 mm in 72 hours).
Reunion Island is located about 420 km east of Madagascar, about 200 km west of Mauritius, more than 700 km south of the Seychelles and a few degrees north of the Tropic of Capricorn.
The creation of the Reunion National Park is the result of several decades of public policies in favor of the preservation and enhancement of the mountainous areas of the island. In 2010, the whole heart of this French department was included in the UNESCO world heritage. The Park Charter, to which 17 of the 24 municipalities of the island have already joined, is a territorial (not to say social) project that defends the whole area of ​​the mountainous areas of La Riunione, in order to enhance the natural and cultural heritage and landscaping of the area, aiming for a fair balance between protection and development.
With its 105,447 hectares, the Réunion National Park covers 42% of the surface of the island and hosts exceptional sites, classified as UNESCO World Heritage Sites, such as the majestic mountain cirques of Cilaos, Mafate and Salazie, but also as the famous Piton des Neiges and the famous Piton de la Fournaise volcano.
Reunion is a volcanic island born about three million years ago following the emergence of the volcano of Mount Piton des Neiges, today the highest elevation of the Mascarene and the entire Indian Ocean with its 3,071 meters high. The eastern sector of the island is instead occupied by the Piton de la Fournaise, a volcano of much more recent origin (500 000 years), considered as one of the most active on the entire planet. The emerged part of the island represents only a minimal part (about 3%) of the underwater mountain that forms it.
In addition to volcanism, the island’s surface is made even more rugged by very intense erosive phenomena. The center of the island is home to three vast hollow circuses originating from erosion (those of Salazie, Mafate and Cilaos), while the slopes are furrowed by numerous streams that have dug as many gorges and ravines, estimated to be no less than 60013, so much so that the streams that flow over their bottoms are also several hundred meters deep.
The ancient Piton des Neiges massif is therefore separated from the Piton de la Fournaise massif by the plaine des Palmistes and the plaine des Cafres, which constitute a natural passage between the east and south of the island. In addition to the central plains, the flat areas are represented by the coastal areas, especially the northern and western ones. The wild southern coast is more steep.
Between the thin coastal strip and the peaks of the hills lies a steep transitional area whose difference in height varies considerably before reaching the ridges that surround the circuses or the so-called Enclos, the Piton de la Fournaise caldera.
From the climatic point of view we are in hot and humid conditions, characteristic of the tropical belt, with the rainy season from November to April. During the dry season the climate is mild, but on the heights of the center the temperature can drop below freezing. In the central highlands the climate is almost alpine. It is not uncommon to witness snowfall. In the rainy season the climate is humid.
Although the maximum temperatures are around 30 °, the perceived subjective temperature is high due to the humidity. In the eastern part of the island, rainfall is abundant and often recurrent during the central hours of the day; in the western region the climate is relatively drier and scarce rainfall.
The National Park area offers a mosaic of majestic natural landscapes built by subsequent volcanic eruptions and shaped by landslides and erosion: rocky peaks, glacial cirques and cliffs offer the island impressive jagged reliefs. 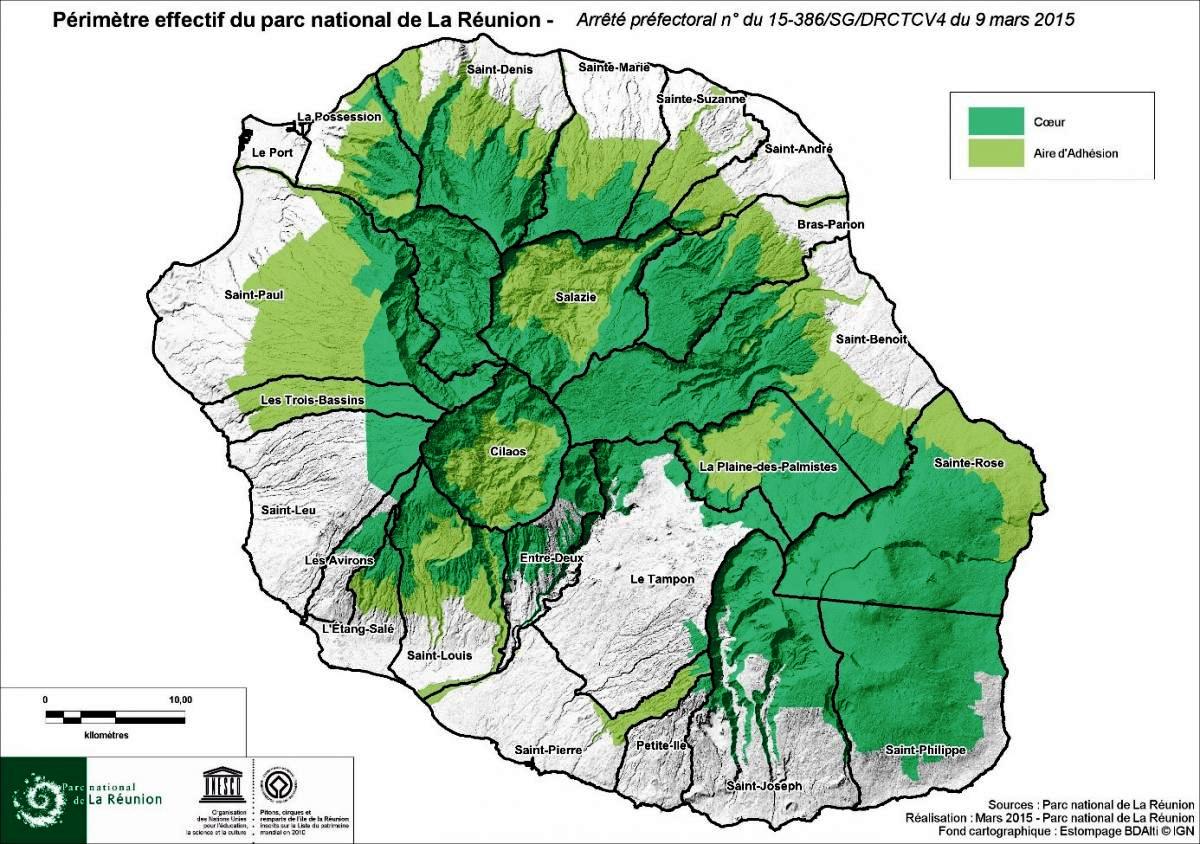 Flora –
The park welcomes more than 110 different habitats, with about 230 endemic plant species, from the coast to the mountain (up to 3 070 meters), passing through dry or tropical wet forests, pandanaies (wetlands typical of the island) and tamarind woods. A variety that allows him to be among the 25 most important places in world biodiversity.
Open to visits, the Maison du Parc, located in La Plaine-des-Palmistes, invites you to discover the permanent exhibition “La Réunion, île de nature, coeur des hommes” (“La Réunion, island of nature, heart of men” ), dedicated to the nature of Reunion and its pleasant gardens full of endemic species.
Contrary to Mauritius, the cultivation of sugar cane here has not had great results due to the nature of Reunion. The coasts are full of filaos to the west, vacoas to the east. Inland, the vegetation is lush, in particular the Salazie Circus in the north west. The forests of Belouve and Bebour are home to guavas, arborescent ferns, orchids, colorful woods and around the Creole houses there are profusion of flowers: bougainvillea, frangipani, jacarande, hibiscus and spice plants. In this regard, it is interesting to visit the Mascarin Botanical Conservatory, located in an ancient agricultural reserve near Saint-Leu, without forgetting the Garden of Eden, near Saint-Gilles-les-Bains.
The park area also includes some inhabited areas (villages of Mafate and Salazes), as well as some cattle breeding and various forest species.

Fauna –
This territory has preserved, in addition to the flora a unique fauna in the world, with rare birds at risk, such as the Bourbon black Pétrel, the meeting Échenilleur (or Tuit-tuit), the Petrello di Barau (or Taille-vent) , and the Busard de Maillard (or Papangue), the only bird of prey on the island.
Reunion is rich in endemic animals, including some recently extinct and others in danger of extinction.
Among the endemic birds the following endemic birds have become extinct (generally from the 18th century):
Alopochen kervazoi, the ruddy shelduck of Reunion
Columba duboisi, the Reunion pigeon
Dryolimnas augusti, the Reunion ring
Falco duboisi, the kestrel from Reunion
Fregilupus varius, the transfer of the Reunion
Fulica newtonii, Reunion’s coot
Mascarenotus grucheti, the Reunion owl
Mascarinus mascarin, the Reunion parrot
Nycticorax duboisi, the night heron of Reunion
Porphyrio coerulescens, the chicken Sultan of Reunion
Threskiornis solitarius, the solitary of Reunion or hermit ibis of Reunion
Terpsiphone bourbonnensis, a flycatcher from the endemic paradise of Reunion
The following are still present, among others:
Circus maillardi, the Reunion Albanella (bird of prey), classified in danger
Hypsipetes borbonicus, the Reunion bulbul, not endangered (a related species lives on Mauritius)
Lalage newtoni, the tuit-tuit, in critical danger (survives only in a restricted area)
Pseudobulweria aterrima, the Mascarene petrel (seabird), classified as critically endangered (already extinct on Mauritius and Rodrigues)
Pterodroma baraui, the Barau petrel (seabird), classified in danger
Saxicola tectes, the tec-tec, of the flycatcher family, not threatened
Terpsiphone bourbonnensis, the reunion flycatcher of paradise, not threatened
Zosterops borbonicus, the white Reunion occhalin, not threatened
Zosterops olivaceus, the olive grove of Reunion, not threatened
Other endemic animals
Among vertebrates of other classes, endemic and extinct, we mention:
Cylindraspis indica, the Reunion land turtle.