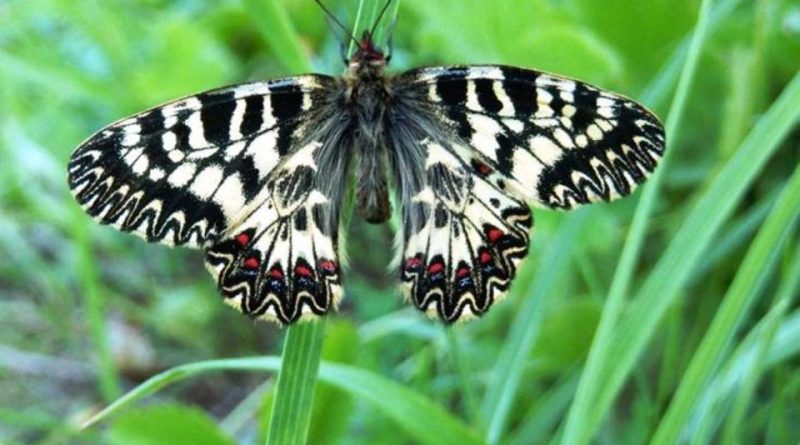 The southern festoon (Zerynthia polyxena Denis & Schiffermüller, 1775) is a moth belonging to the Papilionidae family.

Geographical Distribution and Habitat –
The southern festoon is a butterfly with a Eurasian distribution and is widespread in central and southern Europe (south-eastern France, Italy, Slovakia and Greece) which covers all the Balkans and reaches the south of Kazakhstan and the Urals.
It is present throughout Italy, excluding Sardinia, but this is everywhere uncommon because the species is closely linked to its host plant and is therefore considered a threatened species; it is in fact included in the list of species of Community interest which require strict protection of the “Habitat Directive” (Annex IV).
This rare butterfly lives in habitats characterized by warm, sunny and open places such as meadows rich in grassy grasses, vineyards, river banks, wetlands, cultivated areas, wastelands, rocky cliffs and karst soils, at an altitude between 0 and 1,700 meters above sea level, but generally below 900 meters.

Morphology –
The southern festoon is a butterfly that at the adult stage has a wingspan of 50-60 mm.
Females have slightly longer wings, usually lighter in color than males. The basic color of the wings is yellow, with a complex design made up of several bands and black spots.
At the edges of the hind limbs they have a sinuous black line with a series of blue and red points to discourage potential predators (aposematism). The body is dark brown and has red spots on the sides of the abdomen.
This species is somewhat similar to: Zerynthia rumina, Zerynthia cerisyi and Zerynthia cretica. However, this butterfly can only be confused with the Z. rumina. The differences are the presence of blue on the rear wings of Z. polyxena and the relatively lower amount of red on its antennae compared to the Z. rumina. The populations of these two species overlap only in south-eastern France.
The caterpillars of Zerynthia polyxena are up to 35 millimeters long. Initially they are black, then they are yellowish with six rows of orange and black fleshy tips all over the body.

Aptitude and biological cycle –
southern festoon becomes adult in early spring.
Adults fly from April to June following a single generation. Adults are active for no more than three weeks.
The females lay their eggs individually or in small groups on the bottom of the host plants. The eggs are initially spherical and whitish, bluish in color before hatching.
The caterpillars feed mainly on: Aristolochia clematite, Aristolochia round, Aristolochia pistolochia, Aristolochia pallida.
The food the caterpillars feed on provides the toxic substances which are then also transmitted to adults, making them inedible.
The young caterpillars feed first on flowers and young shoots, while after the second moult they feed on leaves.
The caterpillars perform 5 molts within 4/5 weeks, after which the pupa, tied to a support, winter to flicker in the following spring. Adults are active from May to June.

Ecological role –
The Zerynthia polyxena is a butterfly which although very widespread is rather sparse in its populations; this is because it is also linked to particular habitats but above all to feed on plants of the Aristolochia genus.
This moth in Italy is absent only in Sardinia, while in the rest of the territory it is present with restricted colonies and as already said localized.
The main threats to this moth are those of the removal of its habitats. In Italy, in the Po Valley, the species is threatened by habitat subtraction due to both urbanization and the intensification of agriculture. Also sensitive to climate change.
Conservation measures must be those that maintain the ecotonal areas in which the host plant grows through pasture or mowing, avoiding the pre-imaginary development period.