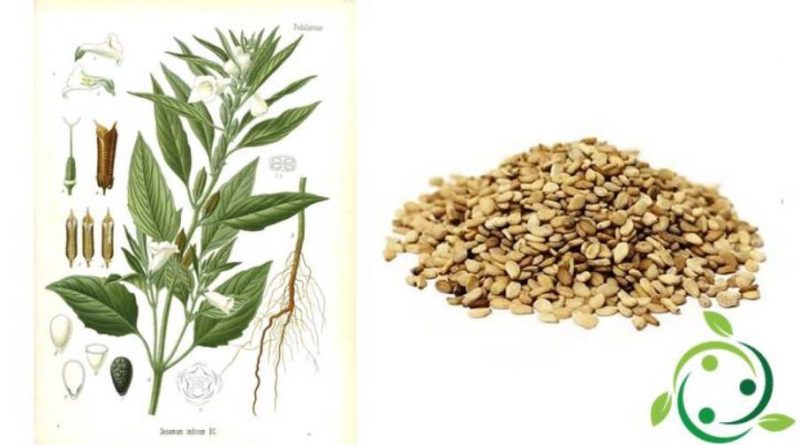 Sesame is a herbaceous plant native to the tropics (Sesamum indicum L.) whose seeds are used in human nutrition.

Origins and History –
This plant native to India and Africa, thanks to its properties, is among the oldest condiments known.
Sesame was already known, already 5000 years ago, in India since it was fundamental not only for the human food of man (ground and mixed in food) but also for its use as a combustile for lamps and for its medicinal uses, religious and cosmetics.
Sesame seeds are among the most ancient oilseed crops known today; the historical finds place its food use 3,000-3,050 years before the birth of Christ, while the first traces of agricultural application date back to just 2,000 years later. Oil extraction began in Turkey 2,750 years ago.
The Indian people themselves attribute the origin of sesame to a gift granted by the deities: according to Indian literature, sesame seeds were born from the sweat drops of Visnu.
In ancient times, four black sesame pots were offered in India for funeral ceremonies; this offer would have favored the passage of the deceased to the afterlife. Even today sesame seeds (both white and black) are considered a symbol of immortality and deeply linked to sacred cults.
When we talk about Sesame, we cannot fail to think of the famous magic formula “Open Sesame” that Ali Babà said to allow the opening of the rock of a cave where treasures were hidden; in the same way, the opening of the Sesame fruit contains the seeds rich in nourishing and beneficial properties that give man strength and vitality.
The importance of sesame in Indian culture is reported not only in Ayurvedic Medicine, as it stimulates digestion and cures urinary tract diseases such as dysmenorrhea and hemorrhoids, but also in Buddhist sacred texts where it is considered one of the superior foods (widely used in the monks’ diet) and the Buddha remembered that “sesame seed, despite being very small, could generate a large tree”.
The nutritional and medicinal value of this “little treasure” was also appreciated by the Egyptians until it was included in the Ebers papyrus (ca. 1550 BC) with the term semsent among the remedies for headaches and bleeding.
In ancient literature it is possible to find the custom of sprinkling the seats of diners with sesame, to hunt food demons.
It was only in the 1st century. A.D. that in Italy, and exactly in Sicily, the seeds were sprinkled on bread.
To date, its use as a condiment, in Africa and in the Mediterranean countries, is highly appreciated especially together with raw honey, with which sesame cakes are prepared.
Due to its high fat content, sesame tends to turn rancid easily, therefore it is always advisable to consume it after having ground it at the moment.

Description –
Sesame is an annual plant that reaches heights between 50 and maximum 100 cm in height with even very long lanceolate leaves.
The flowers are white and tubular from 3 to 5 cm long.
The sesame fruit is a dehiscent capsule (that is, it releases the fruits when fully ripe, hence the famous phrase: “Open sesame”).
Each fruit contains numerous and very small seeds (it takes about 500 to put together one gram), of a more or less dark color in relation to the variety.
The seeds, which are used for food use, are small, white or black, depending on the variety.
Sesame seeds are kept dried or toasted; depending on the treatment, the seeds will appear lighter in color or with a darker shade. Sesame does not contain gluten and therefore can be used for the preparation of gluten-free foods.

Active principles –
Sesame is a very caloric food; energy is mainly provided by lipids, followed by carbohydrates and finally by proteins. Fiber, many minerals and certain vitamins abound. The water is rather scarce.
Despite being a seed (normally grouped in group III and IV), sesame is rich in fats and (like walnuts, hazelnuts, pine nuts, almonds and pistachios) it is better contextualized between fats and seasoning oils (group V ).
The lipid content of sesame is among the highest in its category.
In each fruit, the percentage of oil ranges from 40 to 60% (compared to 15-35% of ripe olives); this determines its high yield in oily extraction.
The triglycerides of sesame seeds are rich in oleic acid (also typical of olive oil) and linoleic acid (omega six essential and precursor of the other fats of the same family), contained in similar proportions (40% c.a. each); palmitic and stearic abound among saturated fatty acids.
Respectively the percentages of oleic acid are 40-50%, and linoleic acid, 35-50%. About 1.5-3% is made up of Sesamol (which has a red color) and Sesamine.
Sesame is also an excellent vitamin source; provides both water-soluble and fat-soluble molecules. In the first group, the concentrations of B1 (Thiamine), B2 (Riboflavin), PP (Niacin), Pyridoxine (B6) and Folate stand out. Of the fat-soluble, however, the most important is – albeit in modest doses – vitamin E (alpha-tocopherol), which together with sesamol preserves the oil from still easy rancidity; this vitamin also confers valuable antioxidant properties to seeds and sesame oil.
It is also rich in minerals, such as above all: Calcium, Magnesium and Phosphorus.
Sesame is rich in fiber, which makes up 12% of weight, while carbohydrates occupy about 23% of the total mass (15% of energy).
Sesame seeds are also rich in proteins of medium biological value, in the amino acid profile of which the high percentage of methionine and tryptophan stands out; the limiting amino acid is lysine, therefore the same as wheat.
Finally, sesame seeds contain other substances, such as antioxidant lignans such as: sesamoline, sesamine, pinoresinol and larchiresinol.

Properties and Uses –
Sesame seeds (whole, peeled, dried or toasted) are almost always used as an ingredient to compose more elaborate recipes.
Also for their nutritional importance, but above all by virtue of the typical crunchiness and the characteristic flavor, sesame seeds are widely used to decorate and embellish, also from a nutritional point of view, various baked products (bread, crackers etc.), bars dietary and meal replacements, muesli, vegetables and even some desserts.
These seeds, not well known in the northern regions, represent a particularly versatile ingredient, especially important in Japanese and Indonesian cuisine; roasted and mixed with sea salt (10-20 parts of sesame for one of salt) give rise to gomasio, a valid and certainly healthier alternative to table salt.
Sesame oil is extracted from sesame seeds, which is a seasoning fat that is suitable for use “raw”; it cannot stand cooking, which compromises its lipid integrity, and has a very bad storage capacity (it oxidizes and rancid easily).
For its organoleptic and gustatory characteristics, sesame flour is an ingredient that is used in bread making or in the composition of ethnic recipes (sauces, pastes, etc.); it does not contain gluten and is therefore used in very low percentages, lower than 10%.
In addition to traditional food use, sesame oil is also used in the pharmaceutical sector as a vehicle for liposoluble parenteral medicines (such as some injectable hormones) and as a mild laxative; for this purpose, high-quality cold-pressed sesame oil is used. There are also uses in cosmetics, for soaps and shampoos.
In 2013, mainly thanks to India and China, the global sesame seed harvest reached 4.2 million tons.
For the Indian and African population, sesame is a food of primary importance and the oil obtained from it constitutes the equivalent of our extra virgin olive oil. The refined sesame oil is light yellow in color, odorless and with a characteristic and pleasant flavor.
Currently, there is an increase in the consumption of sesame seeds and derivatives also in the West, mainly thanks to the relative nutritional properties (quality of fats, fibers, vitamins and minerals).
Like other oilseeds, sesame is also among the most frequent causes of allergic reactions in sensitive people.
In Australia, sesame allergy affects 8.5% of the population.
In Sicily sesame, called giuggiulena, from the Arabic “Giulgiulan” or ciminu “, is added to bread and is used to produce a variety of crunchy.
The Municipality of Ispica, in Sicily, preserves an ancient production, introduced in Sicily at the time of the Arab domination, of sesame. The Hispanic variety has a small seed, amber color and intense flavor. It is sown between April and May and harvested between late August and September. Harvesting is the most delicate moment. It is done with a manual harvest, when the plants vary in color and before the capsules open naturally letting the seeds fall. Plants are left to dry in the sun and then beaten. The seeds must be cleaned through the use of special sieves: a delicate operation, which requires great experience.
Ispica sesame has been recognized as a Slow Food presidium since 2016.
In the Sicilian tradition, sesame is an important ingredient: it is found in the recipe for breads, biscuits and flavor many courses.

Preparations –
Sesame is used worldwide in various kitchens.
In Korean cuisine, seeds are used to prepare typical dishes, such as bulgogi and sannakji.
Furthermore, from the seeds tahina is obtained, a typical condiment of Middle Eastern cuisine.
The seeds, especially of black sesame, may or may not be roasted, depending on the uses. Dark sesame has a more intense and oily flavor than white sesame. It is used almost exclusively in the kitchens of the Far East, therefore it is little known in Europe, except for Greek-Turkish cuisine (it is known as shamar or mavro, from the Greek μαύρο which means, in fact, black), where it can be found mixed with white sesame to garnish the bread.
In Sicily sesame (called “giuggiulena o ciminu”) is added to bread and is used to produce a variety of crunchy.
The sweet black sesame soup is a very popular Cantonese dish along with the black sesame jelly rolls.
Black sesame is an important ingredient in many Chinese and Japanese recipes:
Black sesame seeds, alone or mixed with white sesame, can be used to form the outer crust of uramaki sushi.